Iraq's greatest danger yet: collapse of 'world's most dangerous dam' 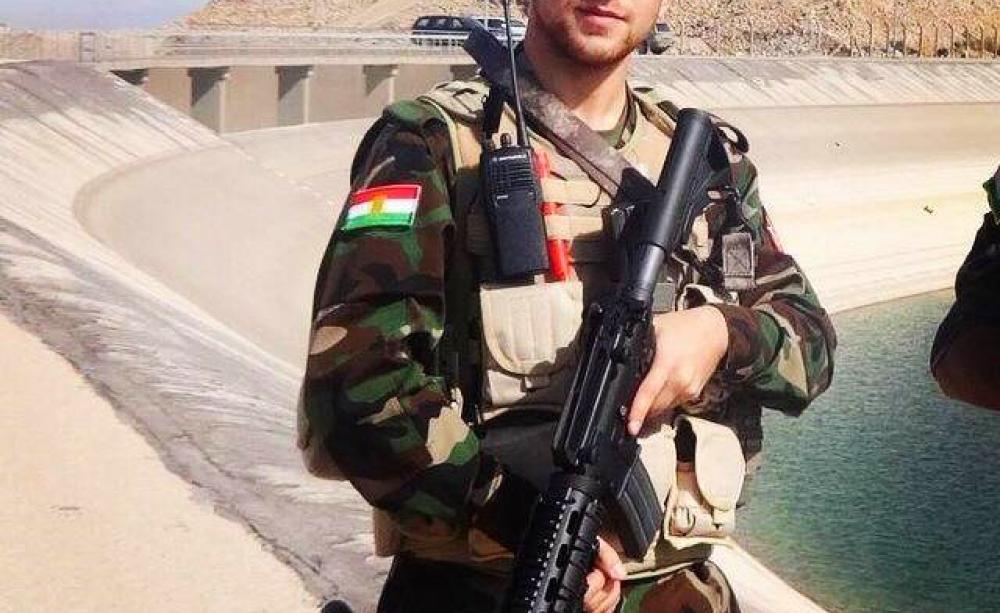 Kurdish Peshmerga soldier on guard at the Mosul Dam, 31st December 2014. Photo: Claus Weinberg via Flickr (CC BY).
As if Iraq has not suffered enough under Saddam Hussein, the vicious UN sanctions regime, the US-UK occupation and the depradations of Daesh, a new threat looms that could kill a million people or more, and destroy Baghdad and a string of other cities along the Tigris river. The porous rocks beneath the Mosul dam are dissolving away and the entire edifice could collapse at any moment, releasing 11 cubic kilometres of water.

If the Dam fails, the water will arrive in Mosul in four hours. It will arrive in Baghdad in 45 hours. Some people say there could be half a million people killed, some say a million. I imagine it will be more in the absence of a good evacuation plan.

It is hard to believe anything more catastrophic could befall Iraq with perhaps three million dead, between the strangulating 1990 onward embargo and the illegal 2003 invasion.

Destroyed or damaged by Daesh include the eye wateringly haunting ancient sites in or near Mosul, which date back to the 25th century BC.

In Northern Iraq destroyed sites include Hatra, from the third or second century BC; Nineveh, the ancient Assyrian Capital; Nimrud, founded 3,500 years ago; Khorsabad, built between 717 -706 BC; and the 4th century Mar Behnam Monastry.

The 1226 CE (AD) Mosque of the Prophet Yunus (Jonah) and his tomb are also no more and numerous other wonders are erased, as are museums and ancient literary treasures.

But even before Daesh, under the US-UK occupation, there was equal decimation under their bombs - and looting of antiquities taking place either at their hands or under their watch.

Now though comes a truly apocalyptic warning: that Mosul itself, along with Baji, Tikrit and ancient Samarra - whose ninth century, golden domed Mosque was destroyed under US eyes on 22nd February 2006 (literally, since they were stationed there) - and Baghdad, the 'Paris of the 9th century' - could be engulfed in a flood of literally biblical proportions.

"Iraqi engineers involved in building the Mosul Dam thirty years ago have warned that the risk of its imminent collapse", reports the Guardian. All cities, towns, villages on trajectory of the great Tigris river below the Dam would be swamped, with Mosul engulfed within four hours in an estimated 65 feet (20 metres) of water.

Estimates are that uncontrolled release of the 11 cubic kilometres of water held behind the dam could kill a million people by the time the tsunami reached Baghdad.

But the danger is not that the dam will be blown up by terrorists of in bombing campaigns. It's that the dam itself is unstable and could all too easily collapse with no external cause beyond neglect.

The Mosul Dam (formerly the Saddam Dam) was built in 1984. Swiss designed, it was constructed by a German-Italian consortium. A fatal design flaw was the fact that it is underlain by water-soluble karstic geology - in short, it is built on a soft limestone bedrock that is both porous and easily dissoved in water.

"Water began seeping through in 1986, when it became apparent that the geological issues were worse than the consultants had predicted. From then on it required constant maintenance to fill the caverns being hollowed out by water running through the soluble bedrock", states the Guardian's article. "A total of 95,000 tonnes of grout of different types (have been) used over the dam's lifetime"

If the Dam fails, the water will arrive in Mosul in four hours. It will arrive in Baghdad in 45 hours. Some people say there could be half a million people killed, some say a million. I imagine it will be more in the absence of a good evacuation plan.

'All we can do is hold our hearts'

Nasrat Adamo, the Dam's former Chief Engineer told the paper that only 24-hour maintenance with constant grouting of the bedrock kept the Dam stable: "We used to have 300 people working 24 hours in three shifts but very few of these workers have come back. There are perhaps 30 people there now."

"The machines for grouting have been looted. There is no cement supply. They can do nothing. It is going from bad to worse, and it is urgent. All we can do is hold our hearts."

Added to the increasing instability of the foundations due to lack of constant maintenance, adds Adamo, "the bottom outlets are jammed" - this as the snows melt further north bringing a further deluge of liquid tonnage.

As Nadir al-Ansari another engineer with the Dam at the time of construction put it: " ... the Dam is not as before. The caverns underneath have increased. I don't think the Dam will withstand that pressure."

Moreover: "If the Dam fails, the water will arrive in Mosul in four hours. It will arrive in Baghdad in 45 hours. Some people say there could be half a million people killed, some say a million. I imagine it will be more in the absence of a good evacuation plan."

The Iraqi government's farcical 'evacuation plan' is to simply advise everybody the entire length of the Tigris river, from Mosul to Baghdad (355.45 km) to abandon their homes, farms, businesses and move six kilometres away, just like that. How? To where?

Saddam's protective Badush dam a victim of the Iraq sanctions

The solution to the pressure on the Dam is to build a second one downstream as a further barrier, gigantic 'filter', in case of the catastrophic collapse.

Ironically it was under the indubitably monstrous Saddam Hussein that a second dam 20 km downstream at Badush was speedily started in 1988 as 'environmental insurance' just two years after the problems with the first Dam came to light.

But with the implementation of the US-UK driven UN embargo in August 1990, and Iraq relying on imports for roughly 70% of everything, the building materials were no longer available and the work on the Badush Dam ceased. It has lain about 40% completed ever since.

The Mosul Dam was taken over by Daesh on 7th August 2014, adding to fears of a catastrophe, it was looted, but regained by the Peshmerga and Iraqi forces on August 19th. In 'assistance' the US-led coalition made nine airstrikes in the vicinity of the Dam. What further damage, fissures to the fragile, endangered foundations have been created from the massive vibrations of such brainless recklessness is not known.

The bombing was in spite of a September 2006 report by the US Army Corps of Engineers warning: "In terms of internal erosion potential of the foundation, Mosul Dam is the most dangerous dam in the world."

On 30th October 2007 another report by the US Special Inspector General for Iraq Reconstruction (SIGIR) said that the Mosul Dam's foundations could give way at any moment. Is there no intelligence, communication, joined up thinking amongst the US' lethally armed forces?

In spite of all, no US puppet Iraqi government since the fall of Saddam Hussein nearly exactly 13 years ago, has done anything meaningful and apparently, in spite of billions of dollars going missing, have had no money to address a danger of such enormity. Those struggling to maintain the Mosul Dam were at one point reportedly not paid for months.

Finally after repeated warnings from experts and now $200 million from the World Bank, in December the government signed a contract with an Italian company, the Trevi Group, to address the massive technical problems, erosion and cavities under this vast structure with it's current holocaustal potential. Italy has also agreed to send over 400 troops to protect the site.

The government is remarkably sanguine, with Mehdi Rasheed of Iraq's Water Ministry quoted by The Economist as saying: "Downstream we can do many things." (What exactly?) However: "In the current situation that is not possible for the people in Mosul city." The population of Mosul was around two and a half million, now with ISIS there and the current disaster the exact number is unknown - and clearly uncared about by the Baghdad regime.

In April, in Rome, an international Conference is to be held to ponder on ways to avert this impending catastrophe. By then it might already have happened. As Nasrat Adamo, the Dam's former Chief engineer told the Guardian: "Nobody knows when it will fail, it could be a year from now. It could be tomorrow."

All US citizens must leave if the dam gives way - but how?

The US is taking the threat seriously enough to have warned, on 29th February, that all American citizens should leave the country should the dam be breached.

How precisely the approximately 15,000 Baghdad US Embassy staff, a reported 16,000 mercenaries, plus other various spooks, special services, would make it from where ever they were to Baghdad airport before the deluge - and whether in the face of it flights would anyway risk coming in - seems not to have been addressed. Perhaps they could be helicoptered off the Embassy roof as in Vietnam.

Incidentally the US Baghdad Embassy, the largest in the world, has swallowed up 104 acres of Baghdad and is nearly as large as Vatican City. It is situated beside the Tigris. Before it was built (completed in 2009) Embassy staff squatted in one of Saddam Hussein's palaces. Those believing in natural justice might be pondering on Saddam's revenge.

It's high time for America's latest proxies in Baghdad to get going and the Italians to get on 'planes - pronto, before a great swathe of 'The Cradle of Civilization' makes the unthinkable tragedy of the New Orleans' floods of 2005 look like a paddling pool.

Felicity Arbuthnot is a freelance journalist.

Also on The Ecologist: 'The battle for Mosul Dam: a new age of water wars beckons'.