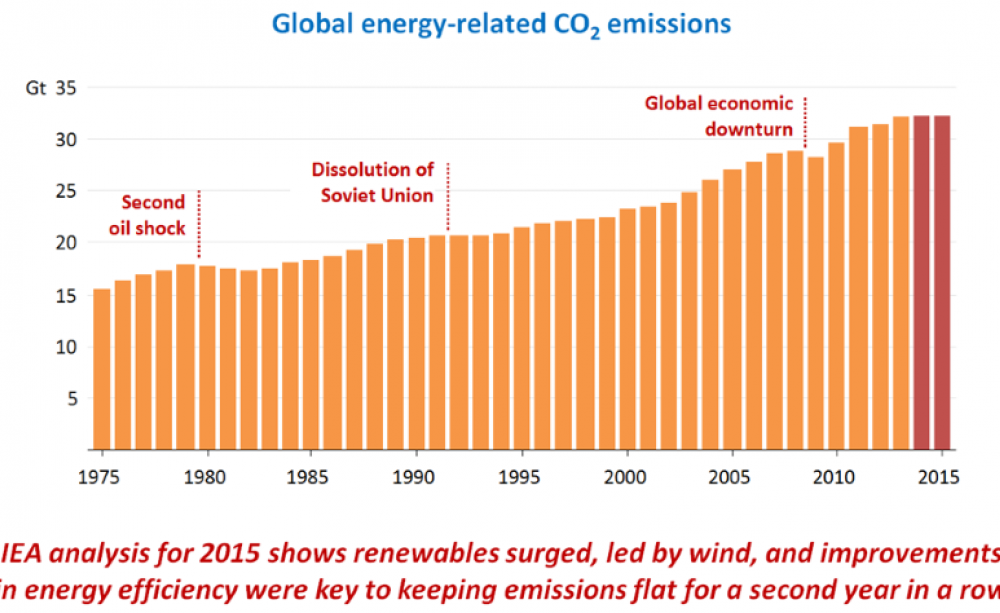 Global emissions trajectory 1975-2015, showing standstill in 2014 and 2015. Image: IEA.
For the second year running CO2 emissions flatlined even as the global economy was growing at around 3%, writes Alex Kirby. But sharply rising temperatures show the need for further massive renewable energy deployment to actually bring emissions down.

The world continued to make progress towards a low-carbon economy during 2015, according to analysis by the International Energy Agency (IEA).

It says analysis of preliminary data for the year reveals that global energy-related emissions of carbon dioxide - the largest source of man-made greenhouse gas emissions - "stayed flat for the second year in a row."

"Global emissions of carbon dioxide stood at 32.1 billion tonnes in 2015, having remained essentially flat since 2013", says the IEA.

The IEA announcement is doubly welcome as some Arctic temperatures continue to warm bizarrely. It comes a day after reports from Fort Yukon in Alaska said temperatures there had reached up to 10°C higher than expected for this time of year.

And as reported today on The Ecologist, temperature rises recorded in January and then in February this year broke all records following two consecutive 'hottest ever' years in 2014 and 2015. Temperatures is some parts of the Arctic were as much as 16C higher than usual in February. The northern hemisphere as a whole was 2C warmer.

Fatih Birol, the IEA's executive director, said of the emissions report: "Coming just a few months after the landmark COP21 agreement in Paris, this is yet another boost to the global fight against climate change."

Significantly, the global economy continued to grow in 2015 by more than 3%, which the IEA says is further evidence that the link between economic growth and emissions growth is weakening.

In more than 40 years, it says, there have been only four periods in which emissions stood still or fell compared to the previous year. Three of those - the early 1980s, 1992 and 2009 - were associated with global economic weakness. But the recent stall in emissions comes amid economic expansion. According to the International Monetary Fund, global GDP grew by 3.4% in 2014 and 3.1% in 2015.

The two largest emitters, China and the US, both registered a decline in energy-related CO2 in 2015. In the US, emissions fell by 2% because of a large switch from coal to natural gas for generating electricity.

In China, emissions declined by 1.5% as coal use dropped for the second year in a row. The economic restructuring towards less energy-intensive industries, and the government's efforts to decarbonise electricity generation, forced coal use down. In 2015, it generated less than 70% of Chinese electricity, 10% below the 2011 figure. Over the same period, low-carbon sources jumped from 19% to 28%, with hydro and wind accounting for most of the increase.

But these declines were matched by increasing emissions in most other Asian developing economies and the Middle East, and also by a moderate increase in Europe.

The IEA will provide more detail on the emissions in a special report on energy and air quality, to be released at the end of June.

The report will go beyond CO2 emissions and will provide a first in-depth analysis of the role the energy sector plays in air pollution, which causes 7 million premature deaths a year.

Meanwhile, the warming already stored in the atmosphere by past greenhouse gas emissions continues to produce striking results.

The US space agency, NASA, published data earlier this week that shows the average global surface temperature in February was 1.35C warmer than the average temperature for the same month between 1951 and 1980 - a far bigger margin than ever seen before.

Professor Stefan Rahmstorf, head of Earth system analysis at the Potsdam Institute for Climate Impact Research in Germany, says: "We are in a kind of climate emergency now. This is really quite stunning - it's unprecedented."

So while the news of standstill CO2 emissions makes a welcome change after decades of increases, the world must aim to do much, much better, seeking to achieve big annual emissions reductions, and ultimately to reduce actual greenhouse gas levels in the atmosphere.

Alex Kirby writes for Climate News Network, where this article was originally published. Some additional reporting by The Ecologist.