Fair game? Hunting lobby's attacks on the RSPCA are proof of its effectiveness 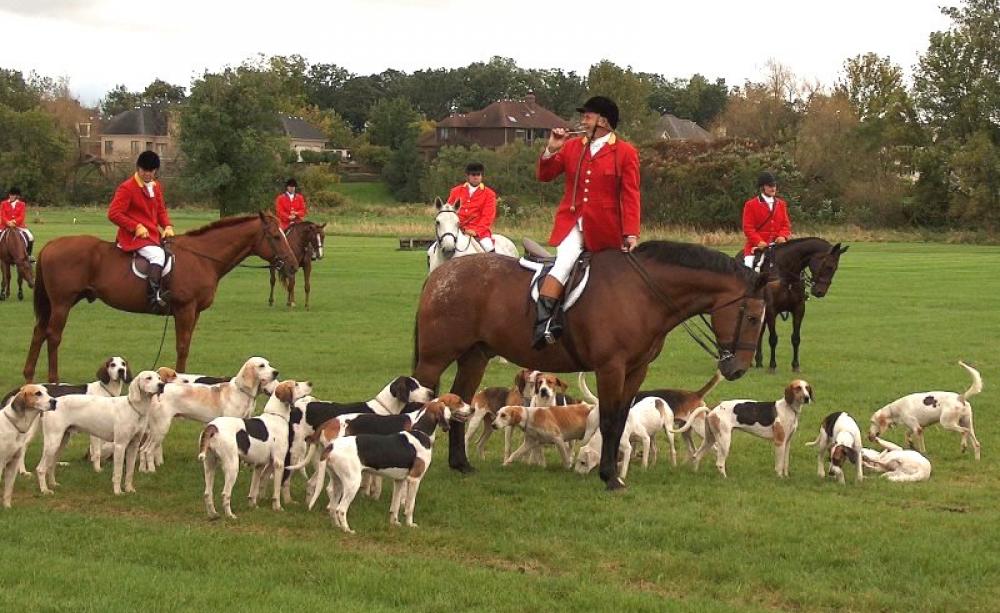 Photo of Fox hunt by TownePost Network via Flickr (CC BY).
Lacking an official body to investigate and prosecute illegal cruelty to wildlife a unique charity, the RSPCA, took on that role almost 200 years ago, writes Lesley Docksey. But now it has ruffled high-ranking feathers by pursuing cases of illegal fox-hunting, and has been forced to leave prosecutions of such cases to the Crown Prosecution Service. But will the CPS do its job?

The smear campaign by the hunting lobby will continue, because it sees the RSPCA and other such groups as getting in its way. It has only one aim - to repeal the Hunting Act.

Few know that the Royal Society for the Prevention of Cruelty to Animals (RSPCA) was in existence for some years before we had police forces, a key factor in understanding why it does what it does.

In 1822 'Martin's Act' was passed. It prompted the founding two years later of the SPCA (it became 'Royal' in 1840), to ensure the enforcement of the law protecting horses, cows and other livestock. The Society even funded its own constables.

The available 'official' law enforcement was too busy catching criminals to spend time enforcing Martin's Act. In a sense the RSPCA became the animal police by default, although it never had nor has any statutory powers.

London's Metropolitan Police Force came into existence in 1829. In 1835 all boroughs across the country had to form their own forces and by 1856 all counties had to have rural forces. But in the process, what responsibilities the police would cover had to be considered. Naturally they would pursue murderers, thieves and the rest - all those crimes that affected other humans.

When it came to cases of animal cruelty the police left the pursuit and prosecution of that particular nasty aspect of human behaviour to the RSPCA. The police took care of harm to humans; the RSPCA dealt with harm to animals. In many ways that still applies, except in the laboratory.

A gaping hole in the enforcement regime

The Cruelty to Animals Act 1876, was brought about by the public's increasing awareness of the horrors of vivisection, sometimes conducted in front of an audience. This was replaced by the Animals (Scientific Procedures) Act 1986, (revised in 2013). But ...

Because there is a secrecy clause protecting the names of the 'scientists', it has been impossible for vivisectionists to be prosecuted. A scientist may have his / her licence to experiment on animals removed but as far as is known, no one has ever been prosecuted, let alone sentenced for cruelty in the laboratories.

One has to ask all governments from 1876 onwards: what is the point of having laws if no one is prosecuted for breaching them?

The Protection of Animals Act and the Animal Welfare Act 2006 have improved things for non-laboratory animals, and bodies other than the RSPCA are now involved. But look up animal welfare on some county council websites. It comes, would you believe, under 'Trading Standards'. To quote one county's site:

The smear campaign by the hunting lobby will continue, because it sees the RSPCA and other such groups as getting in its way. It has only one aim - to repeal the Hunting Act.

In 2014 Derby City Council produced a helpful guide as to who to contact about animal welfare and cruelty. Making the point that both local authorities and the police are working with reduced resources it names the RSPCA, without statutory powers or government funding, as the body to contact in more instances than not.

The fact is that since 1824 the RSPCA has been protecting animals by prosecuting people indulging (and I use that word deliberately) in cruelty towards animals. To emphasise the point, Claire Horton, head of the Battersea Dogs and Cats Home, when giving evidence last month to the Efra sub-committee's inquiry into animal welfare/domestic pets, said:

80% of animal cruelty cases are dealt with through the RSPCA, wholly depending on donations for its funding, saving the country millions. For nearly 200 years, both police and public have been happy for the RSPCA to carry on doing what it does. Until 2004, that is, when the Hunting Act came into being.

It took one season for people to realise that hunts across the country were simply ignoring the Act and hunting foxes as per usual, but from the start the League Against Cruel Sports was monitoring and filming illegal hunting of foxes, deer and hares with dogs, and either prosecuting the perpetrators or helping the RSPCA do so by providing evidence.

The case that hit the headlines was the RSPCA's successful prosecution of the Heythrop Hunt in 2012. Several individuals had been found guilty of breaching the Hunting Act, but for the first time a 'red coat' Hunt was in court. Even worse, Prime Minister Cameron used to hunt with the Heythrop.

There were immediate outbursts from the hunting lobby, led by the Countryside Alliance. There were calls for RSPCA members who backed fox-hunting to give up their membership or otherwise remove their support - displaying a glaring disconnect in thinking. Surely, allowing a dog to tear a neighbour's cat to pieces is no more cruel than allowing foxhounds to tear a fox to pieces?

The RSPCA took on this case because hunt monitors had previously presented evidence of illegal hunting to the police and the Crown Prosecution Service without result. Finally, the monitors approached the RSPCA.

Ongoing campaign against the RSPCA

Since then there have been regular calls for the RSPCA to be stopped from prosecuting people (see here, here, here, here, and here), citing the "vast amounts" of money spent. Yes, these prosecutions are expensive, but consider the facts. Animal cruelty cases also involve the costs of having to rescue, house, nurse and rehome suffering animals. Vets fees and legal fees don't come cheap.

When the RSPCA ordered an investigation of their prosecutions process by independent lawyer Stephen Wooler, he said the Heythrop prosecution had 'been properly brought', the Charity Commission having already ruled that the RSPCA trustees had not breached their duty in bringing the case. Nor, despite the allegations of the Alliance, was the case 'political'.

The Alliance tried to claim that the Wooler report absolutely supported their complaints. A year later the Charity Commission stated that the RSPCA's "zeal for prosecutions" had been unfortunate as had their 'political' opposition to the badger cull.

This surprised the RSPCA's spokesman, David Bowles, who said that just a month earlier the Commission had been very happy with the way the RSPCA had been conducting itself.

Should the RSPCA be prevented from bringing animal cruelty prosecutions?

As far as their supporters are concerned they are there for all animals, domestic, farm or wild. They have always taken the lead on prosecuting people for animal cruelty, and legally can continue to do so.

The Alliance has labelled the whole issue "political" (they made the same accusations about the RSPB). Where they and certain politicians are concerned, the RSPCA shouldn't be prosecuting people for upholding the ignoble 'traditions' of killing foxes, baiting badgers, snaring hares and the like.

Politicians like Simon Hart, Tory MP for Carmarthen West and South Pembrokeshire. Master of the South Pembrokeshire Hunt for ten years and Chief Executive of the Alliance for seven years, he is still a member of their Board, paid £30,000 a year by them, and actively campaigns for the repeal of the Hunting Act.

He is also a member of the Efra Select Committee, currently taking part in the sub-committee's investigation into animal welfare. For people like Hart it is quite in order to be concerned about puppy farming and other such welfare issues while supporting the illegal ripping to pieces of foxes by a pack of hounds. He is, sadly, not alone.

The latest effort to blacken the RSPCA's name appeared last month in the Telegraph, whose headline read: "RSPCA should be stripped of right to pursue hunts or pet owners through courts, say police chiefs."

This was followed by the Independent whose story ran under the title: "Police chiefs call for RSPCA to be banned from prosecuting animal cruelty cases."

Very misleading and not true

Although both articles then gave a wider view of the situation, the headlines were blatantly anti-RSPCA, and it is the headlines that stick.

David Bowles said the national police chiefs had called for no such thing. They were suggesting that after 192 years of the RSPCA bearing the burden it was time the country had a "single agency, preferably a statutory body funded by the government" to take on prosecutions of animal cruelty.

Good idea, but can we believe that the government would find the money to fund such a body, particularly as the RSPCA is saving the taxpayer up to £50 million a year?

It appears the police are happy that the RSPCA should still be responsible for the bulk of animal cruelty prosecutions. Bowles added that, of the five current cases of illegal foxhunting for which the RSPCA had gathered evidence, all five had been handed over to the CPS.

So the RSPCA has made some policy changes - decisions to prosecute hunts will be made by the CPS, based on evidence submitted by the RSPCA. How satisfactory this will prove to be is unknown. One cannot forget that the CPS initially refused to prosecute a huntsman for seriously injuring a hunt sab, citing "insufficient evidence", despite the incident having been filmed and the police being confident they had a strong case.

But the smear campaign by the hunting lobby will continue, because it sees the RSPCA and other such groups as getting in its way. It has only one aim - to repeal the Hunting Act. As a Tory MP's young assistant remarked in the presence of a large audience discussing illegal fox hunting occurring in the constituency:

"The best way to stop illegal hunting is to repeal the act. Then they can all be legal again."

Lesley Docksey is a freelance writer who writes for The Ecologist and other media on the badger cull and other environmental topics.

Also on The Ecologist: