London's 'Greenest Mayor ever'? Sadiq Khan still has a lot to prove 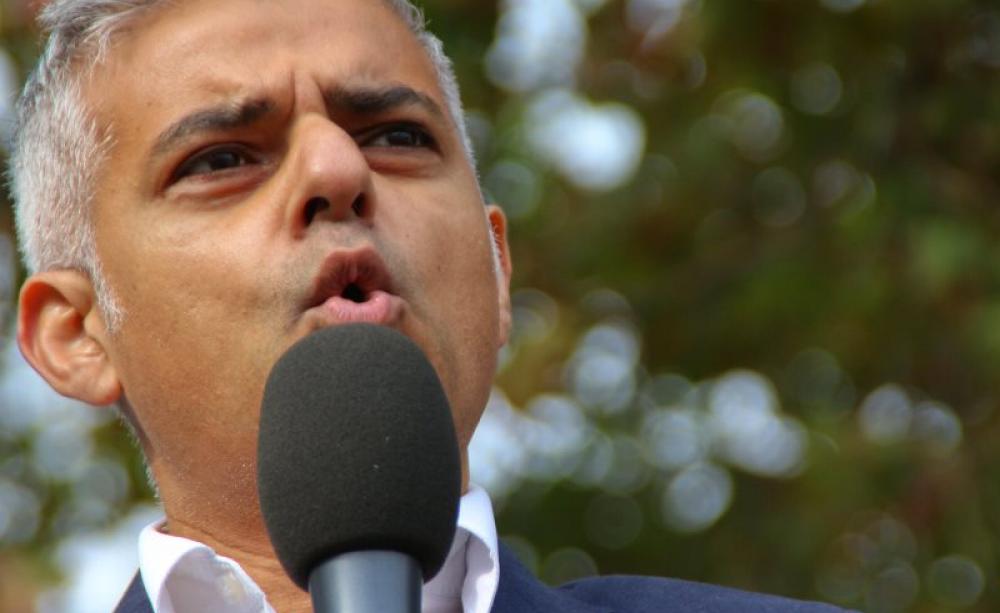 Sadiq Khan speaking against Heathrow expansion at a protest at Parliament Square, London, 10th October 2015. Photo: Steve Eason via Flickr (CC BY-NC-SA).
London Mayor Sadiq Khan promised electors that he would be the 'Greenest Mayor ever'. In spite of his apparent support for a new Thames road crossing in East London and an expanded London City Airport, he still has huge opportunities to make good his pledge. And Green Assembly Members will be working hard to make sure he does.

There are huge opportunities ahead - but it will take political courage for the Mayor to take them. We will be watching him closely - and so are the millions of Londoners concerned about the city they live in.

London's Mayoralty over the past eight years hasn't exactly been a shining beacon of environmental progress.

In the last years of Boris Johnson's term, the London Assembly's Environment Committee gave him 4.6 out of 10 for his climate reduction targets.

But what of the current Mayor, Labour's Sadiq Khan? He promised during his election campaign to be 'London's Greenest Mayor ever' - which certainly bodes well.

But while it's great that Mayor Khan seems to be asserting himself more than Boris when it comes to green issues, he shouldn't get a free pass just because the last Mayor didn't take the environment seriously.

And Khan's lofty aspiration has already taken some knocks. Immediately after taking office, he lifted City Hall's objection to the expansion of London City Airport - removing a key planning obstacle to the expansion which will further blight Londoners' lives with aircraft noise and air pollution.

In an answer to a question I asked him this month, he said that he didn't believe that further airport expansion was "compatible with my aim of achieving legal limits for air quality as soon as possible."

So why was one of his first acts as Mayor to remove City Hall's objection to the expansion?

Smog or cycling - which side is he really on?

He has also refused to withdraw the planning application for the £1 billion Silvertown road tunnel, which if built will just create more congestion and pollution. He has a choice - he can continue on with business as usual with polluting roads, or he can take a new course, which would help solve the congestion and air pollution which is choking our city.

There have been worrying delays to the cycle superhighway construction programme, and under my questioning at Mayor's Question Time recently, the Mayor refused to clarify whether Transport for London's planned cliff-edge cuts to the cycling budget would be reversed.

Although the Mayor, during his election campaign, pledged to increase the proportion of TfL funding for cycling, it is possible that may mean a cut because the TfL budget is set to decrease overall.

But there are brighter signals too. The Mayor has just announced a rating system from zero to five stars for heavy goods vehicles (HGVs) based on the level of vision the driver has from the cab. Making sure lorry drivers can see the people walking and cycling in the street alongside them is crucial to reducing the risk of killing or seriously injuring Londoners getting about the city.

So overall, it's far too early into the Mayor's term to sum up whether he will do what's needed to make London a far greener place.

A huge mandate for action!

Londoners face many challenges, including lethal air pollution, overcrowded roads and public transport and homes that are draughty and expensive to heat. The Mayor has the levers at his control to fix these problems and it's clear that Londoners want him to.

The recent consultation responses to the Mayor's plans to clean up our air showed that he has a huge mandate to take the tough decisions required to challenge the status quo of a car-dependent transport system.

This is badly needed to reduce the impact of diesel pollution on the health of Londoners. 71% of Londoners want a new Ultra-Low Emission Zone (ULEZ) to be expanded and 79% want it implemented faster than its 2020 start date.

There will be many Londoners - particularly in Outer London - who are going to miss out on protection from illegal levels of air pollution, as the current ULEZ proposals only reach to the North and South Circular. His plans are complicated, with a Congestion Charge, a Toxicity Charge and a ULEZ zone.

Real ambition and real progress would be to roll everything into a single road pricing system covering the whole of London, so that everyone can get the benefit of cleaner air.

Cleaning up our air must mean more Londoners using public transport, walking and cycling for their journeys. This will make our streets better places to live, and will release space from car parking for other uses. The huge consultation mandate should give the Mayor confidence to bring forward ambitious plans to reduce our dependency on cars for getting around.

We will be working hard to make sure Mayor Khan makes good on his promise!

It was positive that the Mayor's planned energy company for Londoners will be fully licensed, as that will allow it to really compete with the Big Six energy companies: providing clean, renewable energy city-wide while helping the hundreds of thousands of London households currently in fuel poverty.

The campaign group Switched On London have been campaigning on this issue for some time and have clearly demonstrated the scale of what is possible - clean, affordable power for every Londoner.

Khan should also take action to retrofit the many draughty homes in London, a huge cause of fuel poverty, particularly in the private rented sector. Ken Livingstone's administration insulated 100,000 homes after Green pressure was brought to bear. Mayor Khan can do even better.

Former Green Assembly members have worked with previous Mayors to push them to do better. For example, they persuaded Ken Livingstone to increase City Hall's climate change budget from £300,000 to £26 million at its peak.

There are huge opportunities ahead - but it will take political courage for the Mayor to take them. We will be watching him closely - and so are the millions of Londoners concerned about the city they live in.

I want the Mayor to make good on his election promise - and that may mean making some sharp criticisms where they are deserved. But above all we're looking forward to working constructively with Sadiq Khan to ensure he really is the greenest Mayor that London has ever seen.

Caroline Russell was elected as a Green member of the London Assembly in May 2016. She has been a Green councillor for Highbury East ward in Islington since 2014, where she is the sole opposition councillor.