False promise: nuclear power: past, present and (no) future 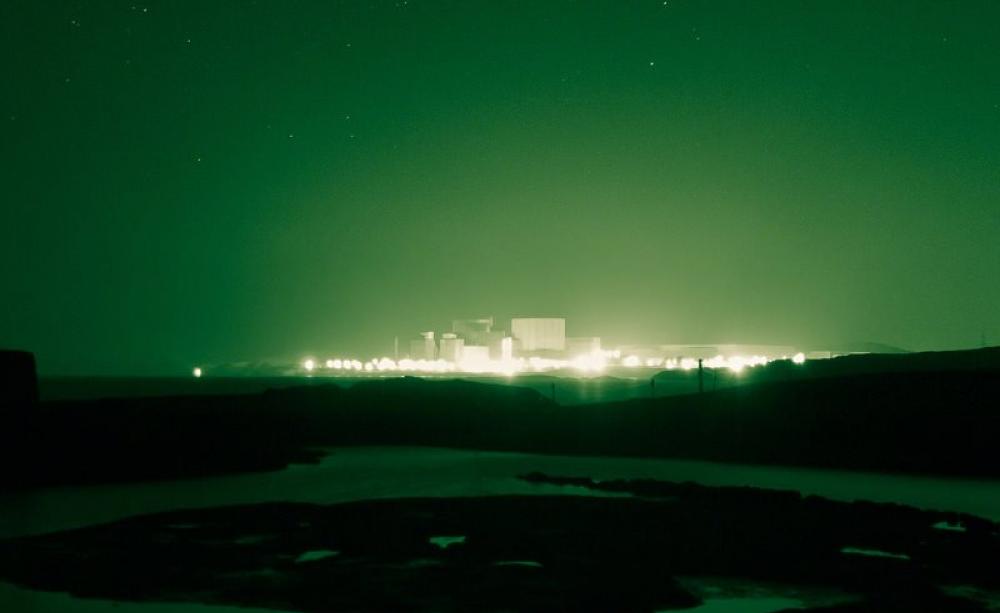 False promise ... Wylfa 2 nuclear power station glowing in the dark on Anglesey, Wales. Photo: Adrian Kingsley-Hughes via Flickr (CC BY-NC-ND).
Nuclear power was originally sold on a lie, writes Dave Elliott. While we were being told it would make electricity 'too cheap to meter', insiders knew it cost at least 50% more than conventional generation. Since then nuclear costs have only risen, while renewable energy prices are on a steep decline. And now the nuclear behemoths are crumbling ... not a moment too soon.

Renewables are on the way to 50% of power production in many countries by 2030, and maybe close to 100% by 2050. The resource is huge, and, unlike uranium or thorium, it won't ever run out, or leave long-term hazardous wastes.

In a December 1953 speech to the United Nations, President Dwight D. Eisenhower launched the 'Atoms for Peace' programme, saying:

"The miraculous inventiveness of man shall not be dedicated to his death but consecrated to his life."

He claimed that "peaceful power from atomic energy is not a dream of the future. That capability, already proved, is here - now - today." And the USA would help to ensure it could be used worldwide.

However, his advisors soon told him that it wasn't viable. A classified internal State Department Intelligence Report, circulated in January 1954, 'Economic Implications of Nuclear Power in Foreign Countries', warned that the introduction of nuclear power would

" ... not usher in a new era of plenty and rapid economic development as is commonly believed. Nuclear power plants may cost twice as much to operate and as much as 50 percent more to build and equip than conventional thermal plants." [Quoted by Mara Drogan in 'The Nuclear Imperative: Atoms for Peace and the Development of U.S. Policy on Exporting Nuclear Power, 1953-1955 Diplomatic History 40 Issue 5 948-974.]

Nonetheless, the nuclear juggernaut rolled on, with, US Atomic Energy Commission Chairman Lewis Strauss, in a 1954 address to science writers, claiming: "It is not too much to expect that our children will enjoy in their homes electrical energy too cheap to meter."

But things didn't always go to plan. For example, there took place a series of accidents at US experimental reactor test sites, including an explosion at the SL1 project in Idaho in 1961, which killed three operators - one of whom was impaled to the roof by a fuel rod.

Then in 1966, the Fermi fast reactor, near Detroit, suffered a fuel melt down, and in 1979, the Pressurised Water Reactor (PWR) at Three Mile island narrowly avoided a major hydrogen explosion by venting radioactive gas to the air. That signalled the end of nuclear growth in the the USA. The multi-billion dollar plant had to be written off. Opposition mounted. New plants, orders collapsed.

Then came the Chernobyl disaster in the Ukraine in 1986, with the cloud spreading across most of Europe. There was a global meltdown in orders for new plants.

However, it wasn't just the accidents that were the problem. The poor economics of nuclear gradually became more apparent- as cheaper alternatives began to emerge. It turned out to be too expensive - e.g. it could not compete with cheap gas plants in the UK. As Lord (Walter) Marshall, one- time head of the UK Atomic Energy Authority, when chair of the CEGB in 1987, commented:

Renewables are on the way to 50% of power production in many countries by 2030, and maybe close to 100% by 2050. The resource is huge, and, unlike uranium or thorium, it won't ever run out, or leave long-term hazardous wastes.

"The British Public have never had the cheap electricity that we have always promised from nuclear power. It has been, and continues to be, a case of 'jam tomorrow, but never today'."

But for our politicians, the nuclear dream never died

But that didn't stop Marget Thatcher from pushing ahead with a new nuclear plant (a PWR) at Sizewell, work on it starting in 1987. Or Tony Blair later trying to relaunch a new programme "with a vengence". That has still yet to happen. But it's pending, with the £24 billion Hinkley Point C European Pressurised-water Reactor (EPR), if it goes ahead, being the first new UK plant in 30 years.

Fukushima, in 2011, had intervened, slowing the nuclear programme worldwide, and creating liabilities of hundreds of billions of dollars. But the UK has pressed ahead with plans for maybe 18GW of new plant - delivering around 30% of UK electricity in the 2030s.

This expansion is based on so-called 'Generation III' reactors, basically upgrades of the Generation II PWRs and similar designs that have been the mainstay of nuclear so far. The new versions are unlikely to be any more competitive against cheap gas and increasingly cheap renewables.

The nuclear industry still has hopes for the French EPR, the Toshiba / Westinghouse AP1000 and the Hitachi ABWR - an upgrade of the Fukushima boiling water reactor design.

But the EPRs being built in France and Finland, Flamanville and Olkiluoto, are both around eight years late and three times over budget. Flamanville's gigantic stainless steel reactor vessel and dome is also suffering from serious metallurgical flaws which may yet prevent its completion.

The two AP1000s being built in the USA have also been delayed, creating losses of over $10 billion that have pushed Westinghouse into bankruptcy, and its Japanese parent company, Toshiba, into what may prove to be a terminal financial meltdown. The two ABWRs under construction in the US are also seriously behind schedule.

Generation IV reactors to the rescue?

Given these problems, some look to new 'Generation IV' designs. They are basically new versions of the old designs looked at in the 1950s, 60s and 70s in the USA and elsewhere - and abandoned as unviable, or after accidents.

The message from the past is not promising. Most countries (US, UK, France) gave up on fast breeders in the 1980s and 1990s. Japan has now too. The UK tested an HTR in the 1960s with its Dragon project at Winfrith. Germany and the USA had a go too. The US also tested some MSR technology in the 1960s, and also the use of thorium as fuel. SMRs were also tested.

None of these ideas went forward owing to massively escalating costs and successive technical dificulties. But the industry claims that new variants on these old designs will be upgraded, cheaper and safer.

However, in a review of Generation IV options, the French nuclear agency IRSN said that, at the present stage of development, it did not see any evidence that "the systems under review are likely to offer a significantly improved level of safety compared with Generation III reactors, except perhaps for the High Temperature Reactor" - and even that would require "significantly limiting unit power".

Allison MacFarlane, former chair of the US Nuclear Regulatory Commission, talking about the HTR, said "I do not see past experience pointing at a positive direction."

She also noted that Fast Breeder Reactors "turn out to be very expensive technologies to build. Many countries have tried over and over. What is truly impressive is that ... many governments continue to fund a demonstrably failed technology."

Cost reduction is clearly vital if any of these ideas is to prosper. That's one of the arguments used for small modular reactors (SMRs): they would be faster to build and so possibly easier to finance. It might also be possible to use the waste heat from them to supply heat to urban areas - if residents would accept them in or near cities.

But is that likely? SMRs are very unlikely ever to be cheap. The reason why civil nuclear power stations ever got so big as the EPR (1.6GW), ABWR (1.6GW) and AP1000 (1.25GW) is to reap 'economies of scale' which would be lost by going small.

And of course there is nothing remotely 'new' about SMRs, indeed they are a distinctly mature technology: hundreds of them have been deployed in military submarines and ships, for decades. The reason why they were never used for civil power generation is simple - they cost too much! So what exactly is about to change?

In any case all these Generation IV ideas are a decade or two, or maybe more, away from anything approaching commercial reality. It's like the situation renewables faced in the 1980s. Renewables did break through and are now viable - wind and PV solar especially. Will Generation IV nuclear be able to do the same? Or do we need to wait until Generation V - fusion? If that ever works. Or do we actually need any of these nuclear ideas?

Renewables have outperformed nuclear across the board - undercutting its cost and delivering over twice its total annual output globally: renewables now supply 24% of global electricity, and are growing rapidly, as against the fairly static 11.5% from nuclear.

Renewables are on the way to 50% of power production in many countries by 2030, and maybe close to 100% by 2050. The resource is huge, and, unlike uranium or thorium, it won't ever run out, or leave long-term hazardous wastes. That looks like our best future.

Dave Elliott is Emeritus Professor of Technology Policy at the Open University and is active in the renewable energy policy field. See his newsletter and blogs.

The book: Dave's new book 'Nuclear Power: past, present and future' for the Institute of Physics looks at the long turgid nuclear story in detail and includes full references. It is due to be published later this month, April 2017.

Once published it will be available here.