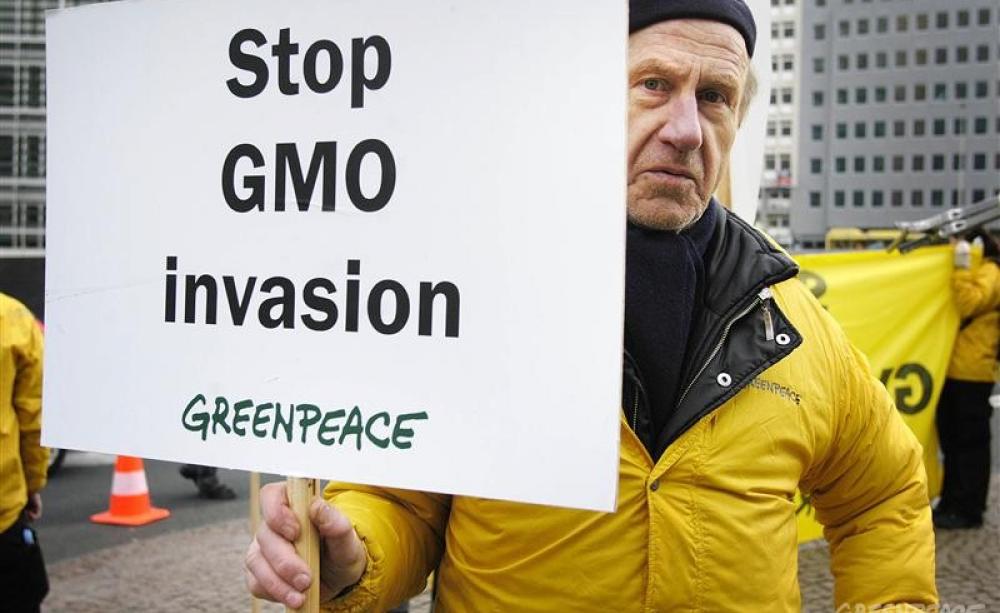 Protests against GMOs have taken place since 1997, in the UK and around the world.

Greenpeace
Greenpeace
The Big Gene Gathering took place Herefordshire during 1997 and the following December the UK's anti-GMO movement was born. DR DAVID KING has been an activist in the movement since the beginning. Here, he explores the reasons for the campaign's success - and assesses the threats ahead

A coalition formed that stretched from the Consumers Association and the RSPB to the anarchists of Earth First!

Are you eating GM food? The fact that you even have a choice is down to 20 years of inspiring direct action and pressure by anti-GM activists. The campaign was hugely successful and has kept GM crops out of British fields until now. But now new and more powerful technologies and Brexit mean that genetic engineering is still a threat.

The anti-GM food campaign erupted into the fields and streets of Britain in 1997, sparked by the threatened invasion of Monsanto’s GM soya. In a few years of frenetic campaigning, Britain became a majority anti-GM country where GM crops could not be grown without being rapidly pulled up.

Opposition these days tends to take a very different form, but organisations like GM Freeze have continued to expose the risks and false promises of the biotechnology industry.

In retrospect, the anti-GM food campaign was successful because it was a perfect storm: several factors came together at the same time to make it almost unstoppable.

It so happened that 1997 was the year that the British people finally decided it had had enough, after 18 years of Tory rule. The scandals of mad cow disease and salmonella in eggs symbolised the horrors of factory farming and neoliberal corporate misconduct, and raised concerns about the purity of our food.

In 1997 the anti-roads campaign was winding down and activists were looking for something new. The anti-GM food campaign was, on the surface, about corporations, food and industrial farming.

But it also spoke to deep but rarely articulated concerns about the relations between human beings and nature, which cross the political spectrum. Many people that I spoke to at events readily understood the dimension of ‘playing God’, even if they were not religious.

In 1997 Monsanto marched in, proposing to begin shipments to Britain of its GM soya, which would end up in 65 per cent of processed foods.

Activists under the banner of the Genetic Engineering Network came together with a range of big NGOs like Greenpeace, to hold the founding event of the anti-GM campaign, the Big Gene Gathering in Herefordshire that summer. We will be celebrating the 20th anniversary of the start of the campaign tomorrow, on December 2.

A coalition formed that stretched from the Consumers Association and the RSPB to the anarchists of Earth First!. It broadened to include celebrity chefs, food writers and businesses like Pret a Manger, that wanted to promote their green credentials.

In an inspired messaging move, the campaigners framed GM food as ‘genetic pollution’. This imagery was emphasised by the trademark wearing of hooded white biohazard suits on crop-pulling ‘decontaminations’. In many rural localities, the anarchists were able to form strong links with local residents.

A vigorous campaign by consumer organisations and the Women’s Institute for consumer labelling of GM food, combined with protests at the supermarkets calling for them to become GM free, eventually forced the big 6 supermarkets to capitulate on GM foods, though animal products from animals fed on GM crops are not labelled and have become the norm.)  Monsanto and its fellow GM corporations were effectively demonised.

Similar campaigns in other European countries succeeded by 2003 in creating a ‘de facto moratorium’ on the approval of new GM crops in the EU, by creating a blocking minority of governments.

Despite the successes of the campaign in the UK, it never succeeded in changing the basic support of the neoliberal-technocratic New Labour government, or of subsequent Tory governments. So there is a risk that Brexit may lead to the commercial growing of GM crops in the UK.

Nonetheless, the anti-GM food campaign succeeded in doing something that was impossible - according to the popular wisdom that 'technology equals progress and anyway you can’t stop technology’.

Since the 1980s, countless industry and government reports hailed biotechnology and the industries based upon it as central planks of economic growth and industrial competitiveness.

Yet the anti-GM food campaign succeeded, throughout the world’s largest market, in placing an almost complete roadblock on the biotechnology industry’s flagship products. Growth of GM crops has been largely restricted to a few countries, notably the USA, Canada, Argentina, China and Brazil.

Despite perennial promises of traits that will actually hold advantages for consumers, the vast majority of GM crops are still herbicide tolerant or produce Bt-toxin in their own cells, which bring questionable benefits only to farmers.

The propaganda chorus that GM crops were needed to feed the hungry people of the global south, has been largely rejected by those countries which view GM crops as a tool of corporate neo-colonialism.

Thus, the anti-GM food campaign has proved that people do not have to accept every new corporate technology that is handed down to them and that the old slogan of democratic control of technology is much more than just a pipe dream.

The moratorium on the approval of new GM crops for cultivation in the European Union has held for the last 14 years. The anti-GM food campaign has to some degree become a victim of its own success and the campaigning energies of radical green activists have moved on to other issues, such as fracking.

The anti-GM food campaign has been a historic shock to hi-tech corporations and science and technology in general. But, as you might expect, the scientists who believe they can solve the problems of the world through technology have not taken the opportunity for a fundamental reassessment of their own ideology.

They have continued to develop new and more powerful technologies for the manipulation of genes and have rebranded biotechnology and genetic engineering as ‘synthetic biology’.

In 2010 a milestone was passed with the complete synthesis in the laboratory of the entire genome of a living organism, Mycoplasma genitalium.

In 2013 US scientists discovered in bacteria a new system for genetic engineering (known as CRISPR-Cas9), which allows them to target the introduction of new DNA into e.g. the human genome at any point they choose.

Earlier genetic engineering techniques had the problem that the new DNA integrated randomly into the genome. This technique also allows the making of small changes to genomes without introduction of any new DNA and so has been dubbed ‘genome editing’.

In a move of unparalleled opportunism, the biotechnology corporations are arguing that this is no longer genetic engineering and so does not need to be regulated and treated in the same way as GM crops.

While earlier genetic engineers tinkered around with one or a few new genes, the new techniques enable the manipulation of entire genomes, at will, and so the ability to make wholesale changes in the basic code of nature. While risk assessment struggled to cope with the ecological risks of GM crops, the impact of such radically new organisms upon ecosystems can only be guessed at.

Other widely touted products include biofuels produced by algae growing in ponds in the desert. The most recent product is a synthetic vanilla.

But these are the first baby steps of synthetic biology. Just 3 years ago US scientists floated the idea of ‘gene drives’, whereby the CRISPR-Cas9 system could be used to overcome the normal rules governing the spread of genes in wild populations.

The ecological implications of this are so vast that even enthusiasts have accepted an unofficial moratorium on releases of such organisms.

And last, but not least, with the advent of genome editing the spectre of GM ‘designer’ babies and consumer eugenics has again raised its head.

In 2015, Chinese scientists genetically engineered human embryos. The legalisation of human genetic engineering, which is banned in nearly all industrialised countries, would rapidly lead to a market for genetic enhancements for increased competitiveness, in which rich parents could give their children even greater advantages.

The new developments of synthetic biology show that environmentalists cannot afford to assume that the fight against genetic engineering of food and of nature in general has been won.

The anti-GM food campaign has lessons for new generations of activists, about how to really change the way people think, and to win. Above all, it gave the lie to the myth that technological change is unstoppable and that democratic control of technology is impossible.

Dr David King is a former molecular biologist and one of the founders of the anti-GM food campaign. He is currently director of Human Genetics Alert and a member of the Breaking the Frame working group. He is currently working on plans for a campaign against the legalisation of genetically modified babies. He’s organising the Big Gene Gathering +20 to celebrate the 20th anniversary of the start of the anti-GM food campaign.