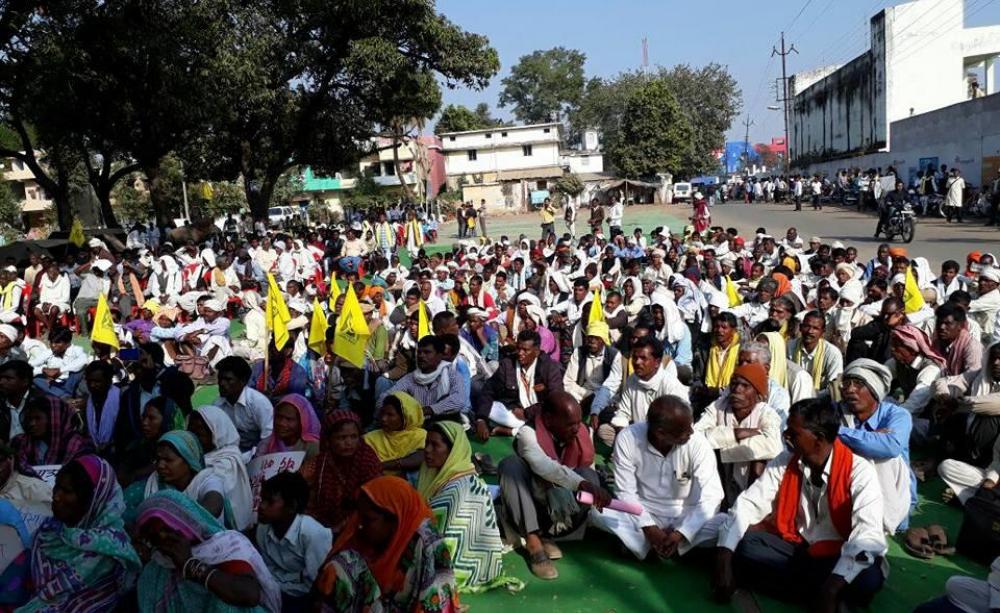 A protest at the district headquarters in Mandla, held on 12 December 2017

The building of the proposed Chutka nuclear plant in the tribal-dominated Mandla district in central India will mean the local population will be displaced - for the second time. It will also contribute to global greenhouse gas emissions. Faced with injustice and threats to their safety and livelihoods, villagers have started a two-month long campaign. KUMAR SUNDARAM reports.

The estimate by engineers went slightly wrong, the authorities announced, and 62 more villages had to be erased, in addition to the 100 that were destroyed as per the plan.

When engineers of the Nuclear Power Corporation India Limited (NPCIL) visited Chutka village in July this year to take deep-soil samples, dozens of women gathered and chased them away. They also seized their equipments which still lies in village.

Sakhu bai, 46, told The Ecologist: “They have come to drive us out of the village. We have built our lives painstakingly since we were driven away from downhill 30 years ago, which is now all submerged in water.

"We cleared the forest and built our houses. I grew here and I am also raising my children. We were left to fend for ourselves after the dam came. And now they are again promising us jobs, land and development. I don’t trust them.”

The scars of displacement and fear of being uprooted again is visible on the faces of all inhabitants of the village – most of whom are Gond adivasi tribes. For the Bargi dam, built between 1974 and 1990, they had to leave their villages in the valley and flee uphill.

They were driven out of their ancestral villages, where they had been living for centuries, for as little as Rupees 500 (less than 10 dollars) for an acre of land. Less than half of the displacess got even this meagre compensation.

The estimate by engineers went slightly wrong, the authorities announced, and 62 more villages had to be erased, in addition to the 100 that were destroyed as per the plan.

Unsurprisingly, ever since the plan to set up the nuclear plant was announced in 2008, villagers have put up relentless resistance.

This plant would divert water from the dam. After denying the unanimous resolutions of elected village-councils (panchayats) rejecting the nuclear plant, the government has deposited consolidated compensation amounts in individual bank accounts, leading to allegations of deception.

Earlier this year, bank details were taken from the villagers for the Prime Minister’s scheme for free cooking gas connection. Even richer villagers like Dadulal Kudape have not touched the amount (One Crore and Twenty Lakh Rupees, roughly 185,000 US dollars) which suddenly appeared.

Adamant that he would rather fight the mighty state and die in his village, Dadulal believes that money can never make up for the land and life and what the village means to him.

Rajkumar Sinha, who came from Bihar state as a young Gandhian activist in the area in the early 1990s, never returned. He sums up the collective experience of the people: “The past 30 years have been a saga of abject callousness on the part of the government, obsessed with what it calls ‘development’, as well as the amazing resilience demonstrated by the people amid unspeakable suffering.”

Under the banner of Bargi Dam Displacee’s Organisation, communities in this region struggled for nearly two decades for building houses as the law considered them illegal in the forests where they fled.

They had to fight to use the catchment area for agriculture. In the course of this struggle, they also learnt to form co-operative unions to market their fish-produce, overcoming the oppressive control of fishing contractors.

Last week the people of Chutka and other adjoining villages in the 30kms zone around the planned nuclear project staged a massive protest at the district headquarters in Mandla.

This marked the culmination of a 2-months long campaign that they launched in the area staring 2nd October – Mahatma Gandhi’s birth anniversary. In this period, activists held meetings in all the villages in the region, and their numbers kept increasing as they traveled from one village to the next.

Chutka is located in the Mandala District in the state of Madhya Pradesh. It is surrounded by rich biodiversity, dense forests, scenic hills and beautiful water bodies.

Besides the 3 villages – Chutka, Tatighat and Kunda - which will have to be immediately evicted, thousands of farmers and fisherfolk will lose their means of livelihood as they are dependent on parts of the reservoir for fishing and strips of land which they get to farm every year temporarily when water recedes.

These areas will become out of bounds for them as a strict security structure will spring up along the reactors. Additionally, the hot water discharged from the reactor will be put back into the reservoir, raising the water temperature by three to five degrees, turning fishing or aqua-farming impossible in adjoining areas.

This does not find any mention in the Environmental Impact Assessment report prepared in 2014 by the Nagpur-based National Energy and Environment Research Institute (NEERI) which has become notorious for peddling farcical reports for obtaining environmental clearances for government and private-owned mega-projects.

Farmers in Chutka and surrounding villages grow at least 3 crops every year – of millet, oil-seeds and corn on their lands, which have been declared barren in the EIA report.

Curiously, this EIA has been conducted only for the 2 reactors to be built in the first phase. While there will be another EIA for the next two reactors, India has no system in place for comprehensive impact assessments. Near Chutka, thermal power plants and other industries are coming up around the Barghi Dam.

Add to this the legitimate worries that with changing climate and decreasing water in Narmada, in next 30-40 years, when the nuclear plant  would still be in the middle of its life-span.

It will scramble for water, along with other industries rapidly coming up in the region, and compete with the local communities including the Jabalpur city that sources its drinking water from Bargi dam.

Water shortage would also pose an insurmountable safety risk in case of a serious nuclear accident. People in the state have living memories of the Bhopal accident and how its victims are still fighting for justice and rehabilitation.

The EIA report, which required approval in a local public hearing as per the law, faced strong resistance at the ground in Chutka.

The local administration had to cancel the EIA public hearings twice in 2013 due to strong protests by local communities at the venue.

Finally, a cruel farce was carried out in 2014 by deploying thousands of police and paramilitary forces to orchestrate a public hearing by allowing only chosen people.

After witnessing such violent bulldozing of their democratic rights, tribal people from Chutka travelled all the way to New Delhi on 4 March 2014, to register their protest near India’s Parliament.

Since then, local protests have been ongoing and the recently announced yatra, a campaign trip touching 575 villages in region mentioned in the EIA report, is only the latest effort by the communities and activists to make their voices heard.

Chutka brings to us what the mainstream discourses on climate change squarely misses: thousands of people in flesh and blood, who have to bear the long-term consequences for each policy shift that happens at the levels of governments and international agreements.

The plight of communities in Chutka signifies what is wrong with big dams as well as nuclear plants. To the false claims of nuclear power combating climate change and poverty, women, children, farmers and fisherfolk of Chutka have just one thing to say - not in our name!

Kumar Sundaram is an independent researcher and Editor of the website DiaNuke.org