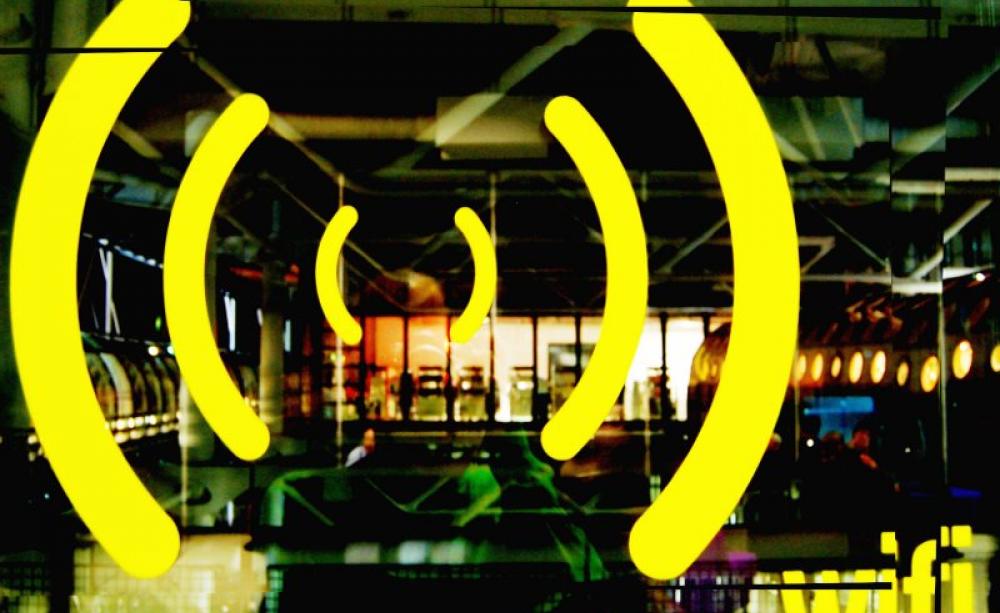 Krakow is fighting back against the rising tide of electromagnetic smog amid increasing evidence of its harmful effects. Photo: when i was a bird via Flickr (CC BY-NC-ND).
As Kraków, Poland's second city, takes steps to protect its citizens from rising electromagnetic 'smog' from mobile phones, wifi, Bluetooth, smart meters and other devices, Lynne Wycherley summarises 2016's news highlights on the emerging bio-risks of rising exposure to non-ionisiong radiation. For how much longer can governments continue to ignore the growing evidence of harm?

Are we placing a covert stress, perhaps, on our exposed trees and pollinators? Could we be failing to safeguard children, teenagers, and those in frail health? What is the growing carbon cost of global, ever-on transmitters?

The first mayor of Kraków to be elected by popular ballot, law professor Jacek Majchrowski is tackling an environmental issue most governors avoid: the electromagnetic pollution in his city.

Following work on air pollution, and in response to growing demand, he is initiating forums for citizens to discuss the growing 'smog' of electro-magnetic fields (EMFs).

In a world first he is also initiating the provision of meters to detect radio-frequency (RF) / extremely low frequency (ELF) EMFs so people can collect objective data on their exposure.

In December, Majchrowski hosted an international conference on EMF pollution and citizens' 'right to information' - an echo of the new Right to Know law in Berkeley, California (cell-phone sellers must supply safety information).

Across the planet, 2016 had seen a paradoxical trend: anthropogenic radiation from mobile and wireless trends continued to rise rapidly, alongside striking, under-reported findings on its possible bio-risks.

Cell-phone use was still climbing. India alone reached over 1 billion verified subscriptions. But like Wilde's picture of Dorian Gray, the small screens endlessly sold to us harboured a troubling reality. In May, researchers in the USA's $25 million National Toxicology Programme released early warnings (later stated in detail). Cell-phone radiation had shown clear tumour-promoting effects in the hearts and brains of the rats under study.

In Britain, meanwhile, neuroscientist Dr Sarah Starkey published a key peer-reviewed paper (October 2016) that exposed shocking bias in the 2012 report by AGNIR, the Advisory Group on Non-ionising Radiation - a report behind many governments' take-no-action health policies, including the UK's. And one which (as she demonstrates) blatantly excludes the peer-reviewed precautionary science.

Long buried by Germany's government, a report offering a rare window on 878 Russian-language science papers (1960-1997) was finally translated, with updates, into English. Long-term studies on Soviet workers repeatedly charted chronic debilitation from weak EMFs - including pulsed microwaves that have been commercially 'repackaged' for today's telecoms.

Though research protocols differed from those current today, raising potential questions, the author, medical Professor Karl Hecht, persuasively condemns his government - and the West as a whole - for its reliance on short-term studies.

Voices in the wind: unheard cautions

But escalating trends were in train. In July, the USA's Federal Communications Commission approved unbridled commercial development of 5G, (July), despite serious question-marks about the new electromagnetic radiation being lined up for use, and the spiralling public exposure it would bring.

A parallel trend for hidden transmitters saw more antennae disguised as birdboxes - and now as cables (January 2017) - the polar opposite of 'right to know'.

Whilst BT ran adverts for "the most powerful WiFi in the world" (UK), newly published papers continued to show DNA or organ damage to WiFi-exposed animals - raising questions about our habitual close exposure to routers / boosters.

And while the ITU (International Telecoms Union) told the United Nations that 95% of the world's population had mobile phone-mast coverage (July), with added 4G/LTE supplying 53%, a landmark study in Germany (September) revealed progressive harm to trees from the growing microwave radiation. Strongly irradiated trees, even two miles from antennae, died back, often to the point that they were felled.

Similarly troubling, a Greek study of pollinating insects found that many species decreased in step with phone-mast radiation (Lázaro et al). Underground-nesting species fared much better - an imbalance, the authors noted, that could have wide eco-impacts, or affect crops.

A study on Antarctic krill (March) found that navigation was disrupted by an exceptionally weak radiofrequency field. Research showing insect cell-death from 6 minutes' weak wireless exposure added to previous, similar findings (a, b, c) on Bluetooth etc. Both hint at a need to monitor our fast-rising, non-ionising radiation.

Psychiatry professor Nicholas Kardaras, an expert in addiction, published his gripping book Glow Kids: how screen addiction is hijacking our kids (USA). Drawing on his clinical experience of over 1,000 teenagers, he adopted the term "digital heroin" for interactive small screens.

Sharing evidence for addiction-hallmark brain changes, however, he neglected plausible links with the wireless radiation itself (published RF risks to the prefrontal brain / opioid receptors).

A survey suggested US smartphone ownership began, on average, at age 10. Around the world, research showing children's cell-phone radiation absorption was higher than adults' - especially in the brain and bone marrow - continued to be overlooked. As did Russia's 4-year study on multi-tested cognitive decline in 7 to 12 year-olds using cell phones (2011), a contrast to milder, short-term findings elsewhere.

Cell-phone risks to the blood-brain barrier which shields the brain from toxins - long highlighted by Professor Salford - found support in a new study. Professor Hardell (who called for pulsed RF to be upgraded to a Class 1 carcinogen in 2014) co-published on whether cell-phones might be a possible, hidden factor in the rise of thyroid cancer.

Lost in the tide: human rights

Outside Sweden, human rights continued to be denied to the rising numbers of adults and children testifying to EHS (severe 'electrosensitive' symptoms).

Reviewing up to date biological evidence, the European Academy for Environmental Medicine recommended low pulsed-microwave exposure limits (0.006 V/m) for those affected - far lower than from today's wireless transmitters - including in schools, hospitals, public transport, and libraries.

In July, the Spanish Court of Madrid pronounced a former telecoms engineer permanently disabled by EHS. Meanwhile an appeal judge (UK) awarded Employment and Support Allowance to a claimant, using surrogate terms due to the lack of legal recognition of EHS.

ICNIRP, the controversial regulatory body with newly documented conflicts of interest, now held 5 of the 6 seats in the WHO's core group on EMFs (2016). As early as 2000, in a 189-page report, environmental professor Neil Cherry concluded ICNIRP neglected evidence "that would have had a chemical declared carcinogenic, neuropathogenic, cardiogenic and teratogenic for humans many years ago."

Though views would vary widely, by October 2016, 223 EMF scientists from 41 nations had signed the ongoing appeal to the WHO and UN for new safety standards.

Installation began to take off in London's tenanted accommodation. Mel Kelly, reprinted in The Ecologist, had already pointed out that many poorer households (tenants) would face involuntary metering and exposure.

Guarding the troubled gardens of our cells

The interaction of toxic chemicals and electromagnetic fields continued to be neglected. The discovery of EMF-sensitive magnetite in the brain from chemical air pollution (September) did not bode well. Nor did the earlier discovery that weak wireless exposure speeded up rodent body tumours triggered by a chemical carcinogen (Lerchl 2015).

Apple launched its wireless 'earbuds', which expose the brain to Bluetooth, just as Professor Pall (winner of eight international awards) published a new paper on wireless risks to our nervous systems and brains (September).

This followed his ground-breaking work on a 'master mechanism' of harm: 26 peer-reviewed papers revealed over-stimulation of electrical gates (VGCCs) in our cell walls. This process boosts production of peroxynitrite (see note) - one of the most toxic compounds in the body - an emerging disease risk factor which triggers free radical damage to cells, tissues, mitochondria, and DNA.

Overall, 2016's precautionary findings, added to the accumulating data suggesting bio-risks, raise sensitive questions. Are we placing a covert stress, perhaps, on our exposed trees and pollinators? Could we be failing to safeguard children, teenagers, and those in frail health? What is the growing carbon cost of global, ever-on transmitters?

And as time passes, might profit-driven trends for microwave 'smart homes', crammed with devices plus micro-transmitters (IoT), risk a subtle 'sick building syndrome', to everyone's hidden cost? Our care for humanity, and the delicate legacy of DNA, invites us to reflect on such questions.

Can we take inspiration from Krakow, and the French Green law on EMFs? As 2017 unfolds, it seems clean ways forward deserve new thought, alongside creative steps for low-addiction living - a vital complement to going low carbon.

Lynne Wycherley is a nature poet with six published collections. Working in parallel with pioneering doctors, she has been investigating non-ionizing radiation for 5 years.

Also by Lynne Wycherley on The Ecologist:

The National Toxicology Programme's Ron Melnick, who led the study design team, confirmed "after extensive reviews, the consensus is that there was a carcinogenic effect."

Exposé of AGNIR, open access: Rev Environ Health 2016; 31(4): 493-503. "Decisions about involuntary, continuous and widespread RF exposures in schools, hospitals, workplaces and public and private spaces in the UK and around the world have been made based upon inaccurate conclusions of the AGNIR report." (AGNIR membership overlaps with ICNIRP: below)

Parents may not realise tablets left in WiFi mode transmit continual microwave spikes - above 6V/m in ipads (video), exceeding smart phones' - even in the absence of a WiFi connection.

Genetic effects in residents (masts) "genetic damage evident in the participants of this study needs to be addressed against future disease-risk" Gandhi et al (ditto for blurred vision etc. 2014)

Opioids ''low-level RF activates both endogenous opioids and other substances in the brain that function in a similar manner to psychoactive drug actions. Such effects in laboratory animals mimic the effects of drugs on the part of the brain that is involved in addiction.'' Bio-Initiative Report summary p.13

Thyroid cancer "The incidence...is increasing in many countries, especially the papillary type that is the most radiosensitive", Hardell et al 2016. Thyroid cancer risks from ionising radiation in Japan (Fukushima), though dismissed by some specialists, were eloquently highlighted in The Ecologist.

ICNIRP International Commission on Non-ionising Radiation Protection. (To date, has upheld industry-friendly safety standards that protect only against high-intensity exposures that 'cook' tissue). In 2004, noting ICNIRP was an "unelected" body, Caroline Lucas observed that "much of the science is being ignored, and the precautionary principle ... seems not to apply." Some scientists have appealed for broader representation on WHO's EMF core group (19 Dec 2016).

Apple wireless earbuds use an 'ever on' Bluetooth microwave transceiver that connects to the user's smartphone. Dr Joel Moskowitz: "We are playing with fire ... You are putting a microwave-emitting device next to your brain."

Professor Havas: "As usage of microwave-emitting devices increases and is marketed to younger consumer without caution, we can expect a societal increase of certain types of cancers...as well as infertility and other health effects associated with free-radical damage".