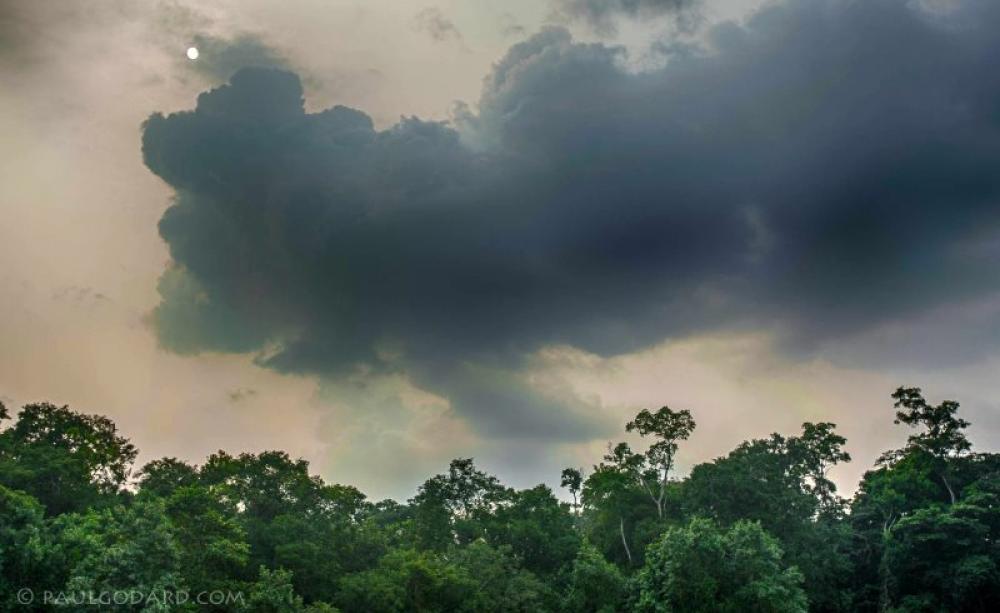 Riverside rainforest in the Congo basin. Photo: Paul Godard via Flickr (CC BY-NC-ND).
A 145,000 sq km area of peatland swamp forest has been discovered in the Congo Basin, writes Tim Radford, and it holds a record 30 Gt of carbon, equivalent to 20 years of US fossil fuel emissions. Now the race is on to protect it from damaging development that would emit that carbon over coming decades.

With so many of the world's tropical peatlands under threat from land development, and the need to reduce carbon emissions to zero over the coming decades, it is essential that the Congo Basin peatlands remain intact.

British scientists have just discovered one of the richest stores of carbon on Earth: 145,000 square kilometres of peatland - an area larger than England - in the forests of the central Congo basin.

The reservoir of compressed plant material holds at least 30 Gt (billion tonnes) of carbon. And this pristine and undisturbed sink of peat is the equivalent of about two decades of fossil fuel combustion in the United States.

The discovery, reported in the journal Nature, is significant for three reasons. One is that it adds a substantial new component to one of the most head-scratching problems in climate science: the arithmetic of the carbon cycle, a cycle vital both to all living things and to climate machinery.

The second is a reminder that, in a world combed by geographers and topographers, monitored for 30 years by dozens of orbiting satellites, and explored and exploited by more than 7 billion people, there is still scope for important discovery.

Third, if this carbon store is opened up to development, it could end up emitting a massive volume of CO2 with disastrous results for global climate. This is already happening in Indonesia, where huge areas of peatland swamp forest are being logged, drained, burnt and cleared for oil palm plantations, making the country the world's fifth biggest carbon emitter.

'The largest peatland complex in the tropics'

"Our research shows that the peat in the central Congo Basin covers a colossal amount of land. It is 16 times larger than the previous estimate and is the single largest peatland complex found anywhere in the tropics", said Simon Lewis, a geographer at the University of Leeds, and one of the discoverers.

"We have also found 30 billion tonnes of carbon that nobody knew existed. The peat covers only 4% of the whole Congo Basin, but stores the same amount of carbon below ground as that stored above ground in the trees covering the other 96%.

"These peatlands hold nearly 30% of the world's tropical peatland carbon, that's about 20 years of the fossil fuel emissions of the United States of America."

Working with Congolese colleagues, Professor Lewis and his co-author Greta Dargie discovered the peatlands in 2012, during a field trip to the swamps of the Cuvette Centrale at the heart of one of the world's last remaining great forests in the Republic of the Congo.

With so many of the world's tropical peatlands under threat from land development, and the need to reduce carbon emissions to zero over the coming decades, it is essential that the Congo Basin peatlands remain intact.

They found a vast extent of dense peat around two metres in depth - and sometimes almost six metres - and used space-based instrument measurements to map an extent of 145,000 sq km.

Stores of buried peat should be no great surprise in the wetlands of a tropical rainforest: swamp water would prevent organic decay, and peat would build up, as it has for instance in the rainforests of Borneo. But the scale of this carbon sink is unprecedented.

The carbon sink in the African peatlands is preserved plant material stored over huge periods of time. Plants photosynthesise tissue from carbon dioxide in the atmosphere; humans and animals and fungi consume the plants and return most of the carbon to the atmosphere.

A residue, however, is preserved in the soil, as semi-decayed wood or foliage, or on the seabed as the carbon shells and bones of sea creatures, and this difference between source and sink is what perplexes climate scientists.

They need to know how to work out, in ever finer detail, the rate at which the world will warm as a consequence of two centuries of combustion of fossil fuels - because oil and coal and natural gas were also once living tissue, made by ancient photosynthesis.

So researchers have tried to assess the quantities of soil carbon stored as peat under the thawing Arctic permafrost, they have asked themselves questions about the impact of wildfires in the world's forests, they have tried to complete the intricate arithmetic of the effect of climate change on how much carbon the forests can absorb, and on the overall impact of global warming on the world's grasslands and savannahs.

And at every point, they have found new riddles to solve: are the oceans responding to climate change by gulping down more carbon? What role do fungi have in the uptake of carbon in the soil? And why are the world's fjordlands so important as carbon reservoirs? So the Congo basin discovery adds a new dimension to the calculations.

Radiocarbon evidence suggests the carbon sink has been accumulating for the last 10,600 years, and the discovery increases the best estimate so far of tropical peatland by up to 36%.

Now, the next step is to find ways to protect the find, says Professor Lewis: "Peatlands are only a resource in the fight against climate change when left intact, and so maintaining large stores of carbon in undisturbed peatlands should be a priority.

Our new results show that carbon has been building up in the Congo Basin's peat for nearly 11,000 years. If the Congo Basin peatland complex was to be destroyed, this would release billions of tonnes of carbon dioxide into our atmosphere."

Dr Dargie added: "With so many of the world's tropical peatlands under threat from land development, and the need to reduce carbon emissions to zero over the coming decades, it is essential that the Congo Basin peatlands remain intact."