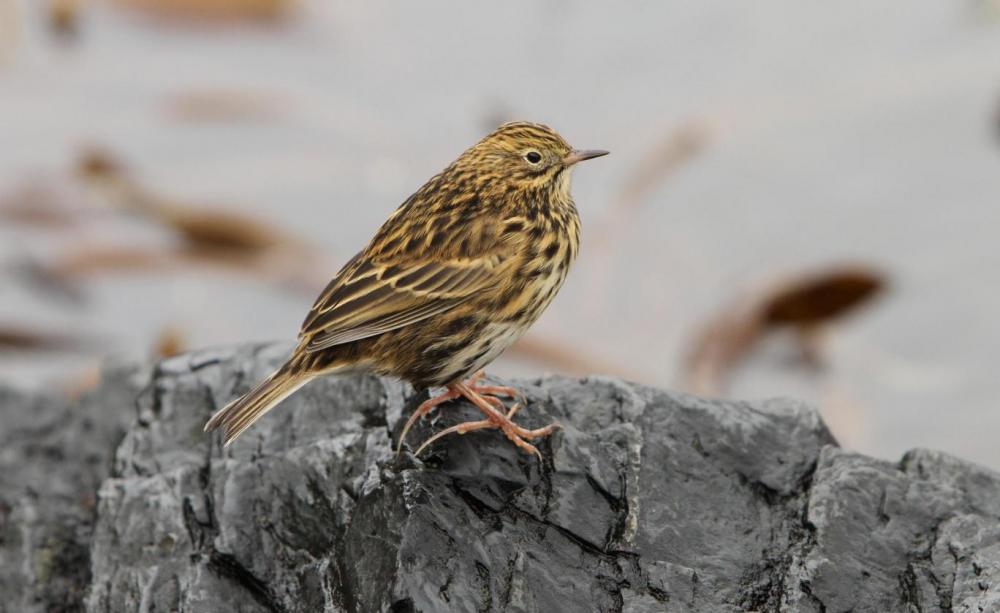 Rare birds including the pipot to remote South Georgia island after successful rat eradication programme. (C) Ewan Edwards
The South Georgia Heritage Trust and the University of Dundee hosted 300 delegates from 43 countries to share a global picture of the world’s islands where ecosystems can hang in the balance, reports LAURA BRIGGS

We know first-hand how important and complex it can be to tackle invasive species.

Invasive alien species have been discussed at length for the first time in the northern hemisphere in a conference bringing together world experts in the field.

Seven key practitioners were able to share research and ideas on the topic this month, thanks to the conference hosted by the South Georgia Heritage Trust (SGHT), which has just completed its baiting phase to eradicate invasive rat species.

The conference follows on from the successes of previous Island Invasive meetings in 2001 and 2010 held in Auckland, New Zealand.

Participation of delegates from Europe and North America, gave the opportunity to learn from the steps already taken in the Southern Hemisphere where successful eradication programmes have already taken place, or are currently being trialled.

The SGHT is currently monitoring the success of the world’s largest island rodent eradication operation through its Habitat Restoration Project, aimed at protecting the islands precious seabird colonies.

CEO Alison Neil said: “We know first-hand how important and complex it can be to tackle invasive species from the extensive work we have carried out to eradicate rodents from South Georgia.

“This event comes at a time when there is a new level of ambition for island conservation. By bringing together the world’s leading experts in the field to share their experiences, global initiatives stand a greater chance of success.”

Invasive alien species (IAS) can be devastating to habitats, and where flora and fauna have evolved in isolation for thousands of years, they can become particularly vulnerable to extinction from anything brought in to their fragile environment.

Managing them is vital for many habitats and topics covered at the conference included biosecurity, plant invasions, and tackling mass extinctions.

Her talk, “It's not all up in the air: the development and use of ground-based rat eradication techniques in the UK and elsewhere”, explored the feasibility of moving to aerial application of rodenticides, rather than ground-based approaches.

She said the opinions of island-communities and the presence of a variety of non-target species can be problematic, sometimes making ground-based operations the only option.

Dr Colin Clubbe of Royal Botanic Gardens, Kew spoke on invasive plant species with his talk entitled “Invasive plants: what can be done about this continuing threat to biodiversity?

Work at Kew has already shown there to be 6,075 vascular plant species currently documented as invasive. He discussed work undertaken by Kew’s UK Overseas Territories team who identify and map invasive plants and look at developing action plans to control them.

Lord Gardiner, the minister responsible for invasive species in England, said: “Invasive non-native species threaten the survival of plants and animals around the world and conferences like this are vital for sharing global expertise and bringing countries together to tackle the problem.

“We are helping our overseas territories protect their precious plants and wildlife and the UK will keep investing and working with the international community and other partners to defend biodiversity at home and abroad.”

There are several global initiatives to eradicate invasive alien species and to monitor their successes, including that of the New Zealand government, who set a strategic goal to eliminate possums, stoats and rats from the North and South Islands of the country by the year 2050.

An ambitious operation to rid Desecheo National Wildlife Refuge (NWR) in the Caribbean of introduced, rats, has now been hailed a success by conservation biologists. This project, the largest conservation operation of its kind to date in the region, can enable the island to regain its status as the most important seabird colony in the region after a century of dealing with the rats.

In Honolulu, Hawaii, the “Honolulu Challenge” on invasive alien species is a global initiative born out of the 2016 IUCN World Conservation Congress. Here, experts, governmental and intergovernmental representatives, NGOs, and protected area managers called for greater action on addressing IAS in order to protect biodiversity and human well- being from their impacts.

Since the 1990s the UK’s RSPB and its partners have been involved in a range of complex and challenging island restoration projects, mostly across the UK and UK Overseas Territories.

Each project has typically involved the eradication or control of invasive mammals or plants. This has led to the recovery of internationally important seabird species on important sites, ranging from European storm petrel to Ascension frigatebird.

Other observed benefits have included the recovery of native habitats and the protection of vital eco-tourism income for local communities.

The total cost of this Habitat Restoration Project, including the monitoring work still to come, is an estimated £7.5 million. The project has been funded entirely by donations raised by Scottish charity SGHT and its US counterpart, Friends of South Georgia Island (FOSGI).

You can find out further information about the Habitat Restoration Project at www.sght.org