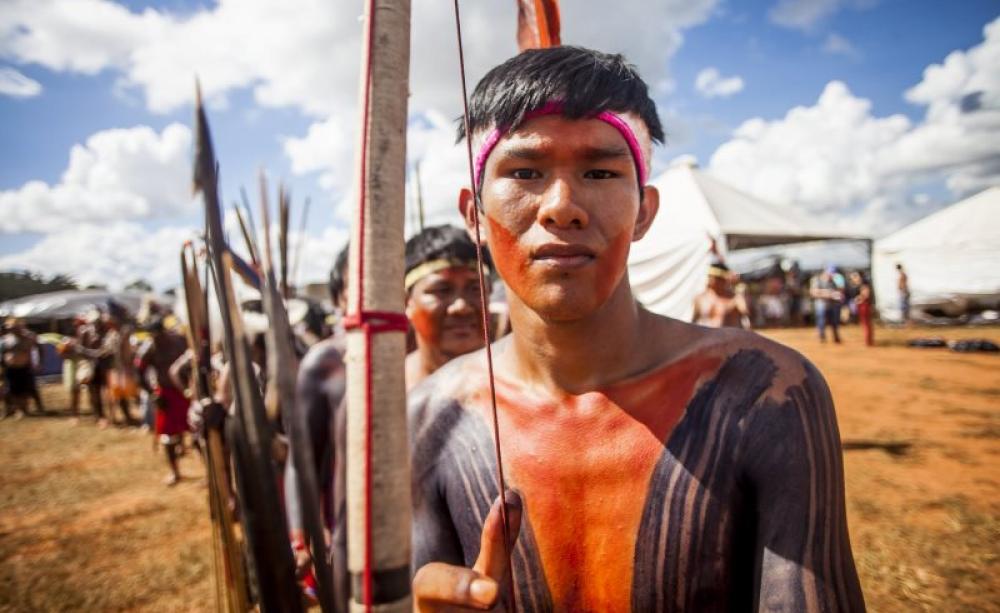 The 14th 'Free Terra' Camp in Praç;a dos Ipês, Brasília, during April 24-28 2017. Over 4,000 representatives from 200 indigenous peoples from all regions of the country were present in a large demonstration of strength of the indigenous movement. Photo: NINJA Media / National Indigenous Mobilization via Flickr (CC BY-SA).
Impunity reigns in the Amazon, write Joe Sandler Clarke & Sam Cowie, and the indigenous peoples of the forest are the big losers as they suffer repeated killings and land grabs. Big cuts to Funai, the agency meant to protect Brazil's indigenous tribes, have encouraged land barons to expand their land holdings into indigenous territories and murder any who resist.

Given all the political instability in Brazil, those who are looking to accumulate land, in whatever way they can, have found an opportunity ... and apparently they feel quite convinced of impunity.

There has been a significant increase in the number of indigenous people and environmental activists killed over land disputes in Brazil, as human rights experts warn of a dangerous political mood in the nation.

New research shared with Energydesk by Brazilian human rights NGO Comissão Pastoral da Terra (CPT), shows that 37 people have been killed in the first six months of the year in rural land conflicts, eight more than at the same time in 2016.

CPT, which has been collecting data on rural violence since 1985, has found that so far the number of people killed in these disputes is set to exceed last year's figures, when 61 people died.

At the end of April, violence against indigenous people in Brazil made international headlines, as 13 members of the Gamela community in Maranhão state were attacked by farmers wielding machetes in brutal land dispute.

A couple of week's earlier, nine people were stabbed and shot over a territorial dispute in Mato Grosso state, in the Amazon.

Jeane Bellini, national coordinator of CPT told Energydesk that recent years have a significant increase in the number of people being killed in rural land conflicts.

Bellini believes the current political turmoil in Brazil, the former President Dilma Rousseff was ousted last year while sitting President Michel Temer is embroiled in a corruption scandal, has helped fuel the violence:

"Rural violence has accelerated under President Temer. Actually, it isn't only the government. I would say that the political instability created by all of those irresponsible people in congress, as well as Temer and his government have added. I mean, they're doing things that are completely against the needs and the rights of the people."

Victoria Tauli-Corpuz, the United Nations Special Rapporteur on the rights of indigenous peoples, told Energydesk that there is a close correlation between the government's moves to cut the agency and the increase in violence. She explained:

"There is increased violence because the offices of Funai at the state levels are not functioning anymore. Funai is the only government agency trusted by Indigenous people. People look up to Funai to protect them. Now there is nobody trying to protect them."

Tauli-Corpuz visited Brazil at the end of last year and found government agencies unable to function. She told Energydesk in December that she visited Funai regional offices which had no staff:

Given all the political instability in Brazil, those who are looking to accumulate land, in whatever way they can, have found an opportunity ... and apparently they feel quite convinced of impunity.

"We went to the office in Bahia and there was no one there. There have been huge cutbacks, and they have continued since I came back from my trip ... I have a sense that the situation in the country is deteriorating."

Months later, the UNSR said that the recommendations she made to Brazilian officials have not been addressed.

In May, a congressional committee led by a powerful farming lobby moved to replace the indigenous rights agency with a body controlled by the justice ministry - a move which campaigners believe could have terrible consequences.

According to Bellini, a culture of impunity around rural killings in Brazil is also to blame for the worsening situation. CPT states that of the 1,800 killings the organisation has recorded since 1985, only 112 ended up in court with very few ending with conviction.

She said: "Given all the political instability in Brazil since last year, those who are looking to accumulate land, in whatever way they can, have found an opportunity to accelerate the process and apparently they feel quite convinced of impunity."

In response to this story, Amnesty International Brazil - which uses CPT's data in its own work - sent us the following statement.

"Amnesty International believes, that in the light of the recent attack on the Gamela community in Maranhão state, it is absolutely essential that the Brazilian government makes a strong statement committing to upholding the Constitutional obligations to demarcate and deliver Indigenous Peoples' ancestral lands.

"Funai must be strengthened, by making available necessary financial resources, and recent appointments to the agency should be reviewed, in order to ensure that those in leadership positions in the agency have the necessary political independence to do their job.

"The Brazilian government must ensure security to human rights defenders and withdraw any initiatives to criminalize or limit their work."

Joe Sandler-Clarke is a UK-based journalist specialising in investigative and public interest stories. His writing has been published in the Guardian, Independent, The Sunday Times, VICE and others, and he curently works at Greenpeace UK.

Sam Cowie is a freelance journalist based in São Paulo, Brazil.

This article was originally published on Greenpeace Energydesk.