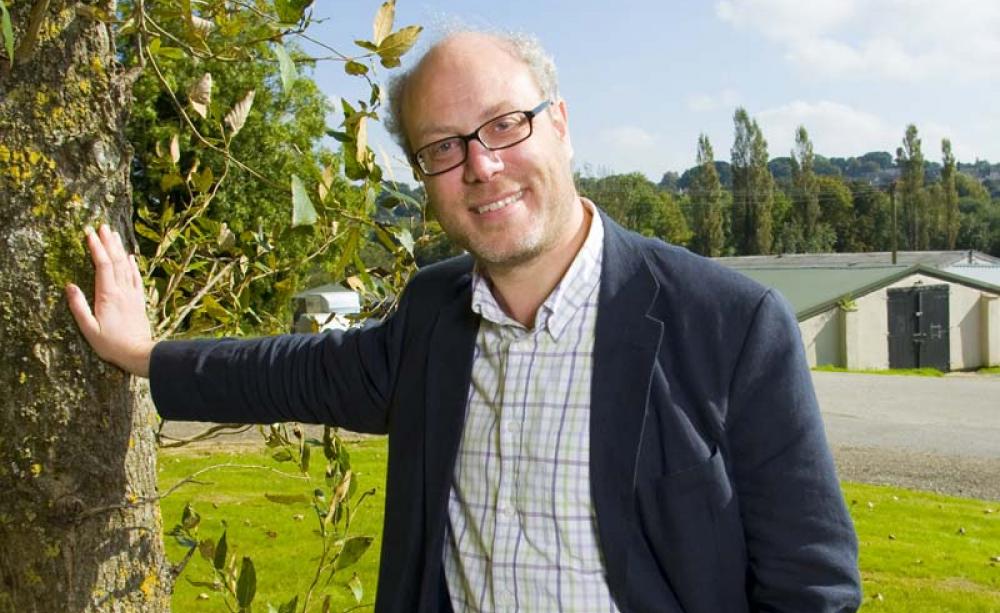 Vivian Woodell courtesy The Phone Co-op
Vivian Woodell, social entrepreneur and founder of the phone co-op, shares his thoughts on the growing co-operative movement and its role in building collaborative, sustainable alternatives to the standard model. Interview by Oliver Tickell.

Co-operatives form a real backbone of the global economy - bigger than all the multinationals put together.

Like so many of us, Vivian Woodell found his mission in life by accident. At the age of 16 he joined his local retail Co-op. “I just liked the idea of it,” he explains.

The year was 1979, around the time Margaret Thatcher came to power. “The whole idea of a shop owned by its customers appealed to me at a time when mainstream thinking was all about privatisation. So that’s where I did my shopping.”

Five years later, just after finishing university, Woodell took a friend who was visiting from Ghana to his local Co-op in Oxford. The friend immediately noticed it was selling Outspan oranges – a prominent South African brand – in defiance of the UN anti-apartheid boycott. After a fruitless correspondence with management, Woodell recalls, “I thought, ‘I’m a member of this Co-op and I’ve got as much right to be heard as anyone else!’ So I put in my motion for the next members’ meeting.

Reviving a radical agenda
“We didn’t win, but out of that meeting a ginger group of local members came together. We all wanted to push for change, and reinvigorate the Co-op in line with its founding principles. At the time we were widely viewed as a bunch of radicals – but the whole cooperative movement was set up by people with a radical agenda for economic change, the Rochdale Pioneers – and we thought the organisation we were dealing with was not reflecting that spirit.

“So three of us stood for election for various positions and in 1985 we swept the board, all getting elected. That’s how I found myself, at the age of 23, the youngest director anyone could remember. It’s hardly surprising that the management regarded me as naive and green behind the ears and would say things like, ‘This kind of idealistic stuff is all very well, but what do you know about running a business?’ I didn’t understand at first that you don’t change an organisation just by passing resolutions! But we made an impact. In the end we recruited a new chief executive who shared our vision, and we helped to start a broader movement to bring the Co-op’s founding values back to life and make it more commercially successful.”

Surviving and thriving as a business with values
Still, those jibes about his lack of business experience rankled. “This is what impelled me to start up The Phone Co-op – a new mass market business in a former state-owned industry with a lot of sharp practice, dogged by debt and financial failures – and show there was a better way of doing it as a consumer cooperative owned by its members. In our early years every single one of our suppliers went through insolvency! But we survived by connecting the business with our values, meeting customers’ needs, and avoiding financial risk.”

Launched in 1998 in a spare bedroom in Woodell’s home in Chipping Norton, Oxfordshire, with a handful of members and capital of £36,000, The Phone Co-op now has a £12.5 million turnover and 30,000 customers, among them charities, other co-ops, businesses and individuals. It has never gone into debt, and its growth is financed entirely from retained profits and members’ capital, which now stands at £7 million. It employs more than 70 staff, who share 11% of profits each year based on the number of hours worked, and has just bought a large new office building in the town centre, where renovations are about to begin.

Investing in new co-operative ventures
But what excites Woodell most is that The Phone Co-op has the financial muscle to help establish and support new cooperative ventures, and has so far invested in over 30, many of them in the renewable energy sector. A timely £300,000 it invested in Southill Community Energy enabled this 4.8MW solar co-op to get off the ground a few years ago, and it has made similar investments in projects from Northern Ireland to Cornwall. It also has its own 50kW solar farm in Gloucestershire, and is a founder member of Co-operative Renewables, a wind and solar power co-op that has installed hundreds of kilowatts of solar capacity on buildings owned by other cooperative societies. Other investments include student housing co-ops in Birmingham and Sheffield, a Fairtrade football manufacturing co-op, and local pubs owned and run by the communities they serve.

One thing that’s clear is that Woodell could have been a very successful businessman in his own right – and could have made a huge pile of cash for himself. Does he ever regret his decision to commit so firmly to the cooperative movement rather than concentrate on number one? “That was not my aspiration. I did not set out to make myself rich. I wanted to prove that a cooperative approach could do it better. We all make choices in life. Is it more important to get rich, or to do something that matters to you?

“In any case, The Phone Co-op is not just me – it’s all the people who have contributed to it with their energy and enthusiasm and shared values. And it owes its success precisely to the fact that it is a cooperative and not just another company. Most people don’t enjoy dealing with their telecoms company, but here the staff people talk to know that their customers are the owners, and it’s a completely different relationship.

Creating a resilient economy
“The beauty of co-ops is that the customers and workers are the stakeholders, and that’s why it works so well. Under a purely capitalist system, human relationships are commodified and become a means to an end – which is to make money. Here people are at the centre and capital is just a means to an end. We exist to provide a service to our members and other customers that meets their needs, in a way that reflects their values.”

A more cooperative economy is also much more stable and resilient than all-out capitalism, Woodell insists. “Just look at the privatised building societies: every single one has either failed like Northern Rock or been taken over. Not one survives. But with a few exceptions, those that remained as mutuals are still in business and are among the strongest financial institutions in the country.

“Look more widely, and you can see that cooperatives form a real backbone of the global economy – bigger than all the multinationals put together! A single farmers’ co-op in India, IFFCO, has 55 million members, the International Co-operative Alliance represents well over a billion co-op members at the UN, and co-ops employ more than 250 million people worldwide, who contribute over US$2 trillion to the global economy. And it has all grown from that one original co-op in Rochdale.

Taking back control
“Let’s just think about this idea of ‘taking back control’ that we heard so much about before the [Brexit] referendum. It has been hijacked by the nationalist right and now it needs to be reclaimed by ordinary people who want more control over their lives – and this is what the cooperative movement can offer. It’s all about people being in control and helping each other.”

The cooperative economy, Woodell insists, offers an increasingly attractive alternative to mainstream capitalism. The Co-op he joined in 1979 – now merged with others to become The Midcounties Co-operative – has just started up a successful new childcare division, and its Co-operative Energy subsidiary, founded in 2010, is presenting a growing nationwide challenge to the ‘Big Six’ energy companies with its customer base of 400,000.

The 'sharing economy' is a co-operative economy
As a Midcounties director Woodell can take his share of the credit for all that, but his ambitions go much higher. “Think of the new global hegemons of the capitalist world: Google, Facebook, eBay. Their business model is to capture a dominant position in an online marketplace that becomes unassailable. But they all work by providing a platform for people to transact with each other, making themselves the indispensable intermediary. They like to call it the ‘sharing economy’, but it’s not – it’s all about monopoly and extraction. This kind of thing should be done by co-ops! Uber should be owned by taxi drivers, and Airbnb by accommodation providers and travellers.

“One obstacle to success is that these huge, dominating businesses have emerged through the venture capital route – where many companies are funded in the hope that just one will be massively successful. That is not how the cooperative movement works. We need new models to allow co-ops to develop at scale. And people are working on it – look at the ‘open.coop’ website, which is brimming with new ideas and initiatives on ‘platform co-ops’, owned and run by their members, building a collaborative, sustainable alternative to the standard internet model.”

A speaker at the open.coop 2017 meeting in London this February, Woodell is looking boldly to the future of co-ops and cooperation. But his feet remain firmly on the ground. The latest venture he has joined is West Oxfordshire Community Transport, set up by local people to keep bus services going across the area in the face of shrinking county council budgets. After buying the bus from the previous operator, it began to run its first local service in Witney just two days before we met.

Former local MP David Cameron might like to claim the venture for his long-forgotten ‘Big Society’. But really it’s much simpler than that: ordinary people coming together to take control of the things that matter to them in their everyday lives. And that, surely, is what cooperation is all about.

Co-operatives form a real backbone of the global economy - bigger than all the multinationals put together.

This article was first published in Resurgence & Ecologist magazine, May/June 2017.