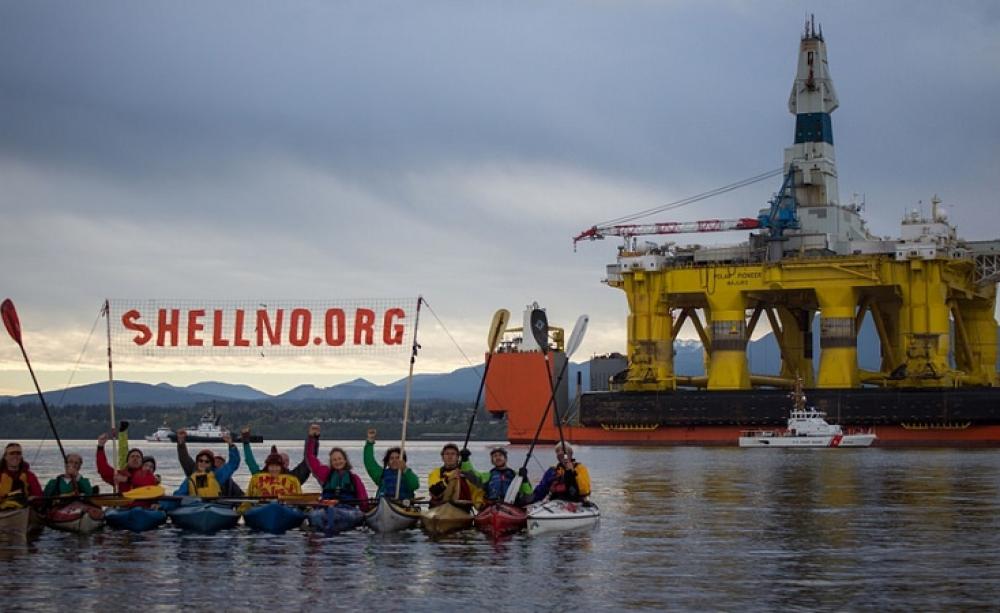 Climate Home
sHell No! Action Council/Charles Conatzer
Friends of the Earth Amsterdam - supported by its international organisation - is threatening to take Shell to court. But unlike any other legal challenge, they are not asking for compensation. The charity claims this will limit the company's investments in fossil fuels. BRENDAN MONTAGUE reports

This case matters for people everywhere. Shell is doing enormous damage worldwide - climate change and dirty energy have devastating impacts around the world.

Environmental campaigners Friends of the Earth Netherlands announced today that it will take the oil and gas company Shell to court if the firm does not act on demands to stop its destruction of the climate.

The legal challenge would be unique because it would be the first climate lawsuit demanding that a fossil fuel company acts on climate change - rather than simply seeking compensation for any damage caused, according to the charity.

Karin Nansen, chair of Friends of the Earth International, said: "This would be a ground-breaking case and - if successful - would significantly limit Shell's investments in oil and gas globally by requiring them to comply with climate-targets.

"Shell is doing enormous damage worldwide - climate change and dirty energy have devastating impacts around the world, but especially in the global South. With this lawsuit we have a chance to hold Shell to account."

The case will be supported by Friends of the Earth International - which has 75 member groups around the world, many of which are working to stop Shell from extracting fossil fuels in each country.

Donald Pols, director of Friends of the Earth Netherlands, said: "Shell is among the ten biggest climate polluters worldwide. It has known for over 30 years that it is causing dangerous climate change, but continues to extract oil and gas and invests billions in the search and development of new fossil fuels."

The threat of legal action from Friends of the Earth Netherlands is part of a growing global movement to hold fossil fuel companies to account for their contribution to dangerous climate change.

In January, the city of New York went to court to claim compensation from the five largest oil companies - including Shell, - for the consequences of climate change. The cities of San Francisco and Oakland as well as several other counties in California are doing the same.

A Peruvian farmer is suing the German energy company RWE for its contribution to glaciers melting above his village caused by climate change.

Nansen added: "If we win this case, it has major consequences for other fossil companies, and opens the door for further legal action against other climate polluters.

"Friends of the Earth International wants to see binding rules for corporations like Shell who so often regard themselves as being above the law, including when it comes to climate goals."

A spokesperson for Shell said in a statement: “The Shell Group has long recognised the climate challenge and the role of energy in enabling a decent quality of life.

"We strongly support the agreement in Paris to limit global warming to two degrees Celsius or less, but we believe climate change is a complex societal challenge that should be addressed through sound government policy and cultural change to drive low-carbon choices for businesses and consumers, not by the courts.”

Brendan Montague is editor of The Ecologist, founder of Request Initiative and co-author of Impact of Market Forces on Addictive Substances and Behaviours: The web of influence of addictive industries (Oxford University Press). He tweets at @EcoMontague.