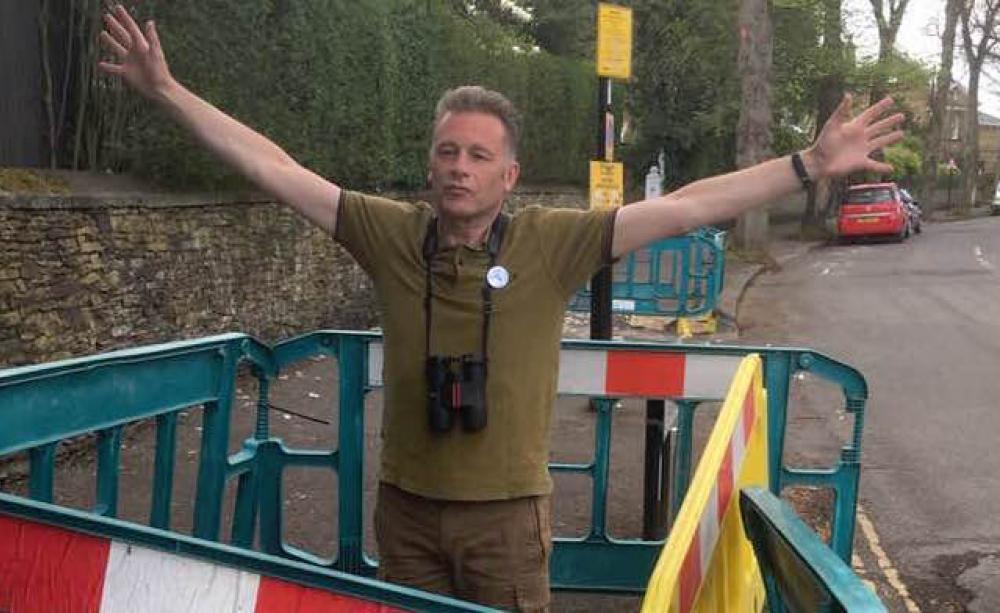 Chris Packham, the BBC naturalist stands where a tree once grew as the Sheffield controversy continues.

Alison Teal
The controversy involving a Sheffield City Council contractor chopping down almost half of the city's street trees shows no sign of abating. PAUL MILES argues it could prove to be a serious vote loser for the sitting councillors in the forthcoming local elections...

No-one should be under any illusion - this is the worst industrial-scale felling of good quality urban trees that I have ever seen anywhere in the world.

Chris Packham, the BBC naturalist, visited Sheffield on Earth Day in the company of top urban tree consultants, Philip van Wassenaer from Canada and Jeremy Barrell, from Hampshire, to learn more about the situation and to offer support to campaigners.

Van Wassenaer said during his visit: “After looking at dozens of trees scheduled to be felled in many locations, I didn't see one that had a good arboricultural reason for removal. In Canada, the goal of Urban Forestry is to have large stature, full-canopied trees. Sheffield has just those trees but is now cutting them down. It's hard to fathom!”

The latest issue of Resurgence & Ecologist magazine is out now!

Barrell travels extensively to international seminars to speak about arboriculture and heritage trees. He estimates that most of the mature street trees in Sheffield still have a potential “seventy to ninety” years of providing shade, reducing flood risk, minimising pollution and providing habitat for insects, birds and mammals.

“When trees are mature, they’ve just started to deliver these benefits. Saplings take 40 years to reach such a stage. No one should be under any illusion, this is the worst industrial scale felling of good quality urban trees that I have ever seen anywhere in the world,” said Barrell.

Councillors in Sheffield may lose the support of a tranche of the electorate at local council elections next week because of the ongoing felling of thousands of healthy mature street trees. The "chainsaw massacre" - and the way in which the council, its PFI contractor Amey, their private security force and South Yorkshire Police are treating protesters - has so incensed residents that some are no longer planning to vote for the current council leadership.

Sheffield City Council apparently sees no irony in holding an internet consultation with residents on how to make Sheffield a greener city. The consultation, titled ‘Green City Strategy - For a low carbon, resilient and sustainable Sheffield’ closes on 29th May.

The council press office is also currently promoting a video produced by Amey that quotes an anonymous resident as saying “the protesters have no respect for democracy”. In the Amey video, a handful of residents voice their support for the tree felling, saying that tree roots are causing pavements to become hazardous and that homes are being damaged. The same residents claim that the actions of tree defenders are intimidating.

Jennifer Saul, Professor of Philosophy at the University of Sheffield, gives another viewpoint. She says that the pro-felling residents were aggressive towards the tree defenders and that there had been no official report to say that cellar damage was caused by the tree.

While Amey and the Council can rustle up a handful of people who agree with the felling, hundreds of those who disagree with the Private Finance Initiative (PFI) contract - which states that up to 17,500 of the city’s 35,000 street trees could be destined for the chop - have marched through the city centre to make their feelings known.

One peaceful demonstration features on a video made in response to the multinational's propaganda. “Sheffield City Council and Amey have no respect for democracy”, counters this video - which shows the apparently heavy-handed tactics used by police and Amey’s security staff against protesters, many of whom are elderly.

The Council’s rationale is that it is worth cutting down a proportion of the city’s trees if it means a significant improvement in infrastructure and resultant investment from new business. The council’s public relations team points out perceived improvements to Sheffield’s roads since Amey began its contract, as judged by respondents to last year’s survey by the National Highways & Transport Network.

However, such claims are put in doubt by the council’s own 2018/2019 budget consultation which shows that while ‘transport and highways’ ranks third in priority for spending after social care and education, the majority of respondents think that the state of transport and highways has ‘got worse’.

The Sheffield Tree Action Groups Facebook page has examples of roads that have recently been resurfaced by Amey but are already potholed and of temporary barriers left around tree stumps for weeks, obstructing pavements.

Shel Irenesdottir, a Sheffield resident, wheelchair user and vociferous tree defender, blames the uneven pavements on a lack of maintenance by Amey and “not the trees.” Another English council - Gloucestershire - has labelled Amey as “hopeless” and is not renewing its contract with them for highways maintenance.

The story of Sheffield’s tree felling controversy has now appeared in all major UK newspapers, on TV news channels and in the New York Times and Spain’s El Mundo. An international support group for the tree defenders has been established - @STIC17500 - on Twitter and an increasing number of experts and celebrities from around the world are speaking out.

Paul Miles is a regular contributor to The Ecologist.