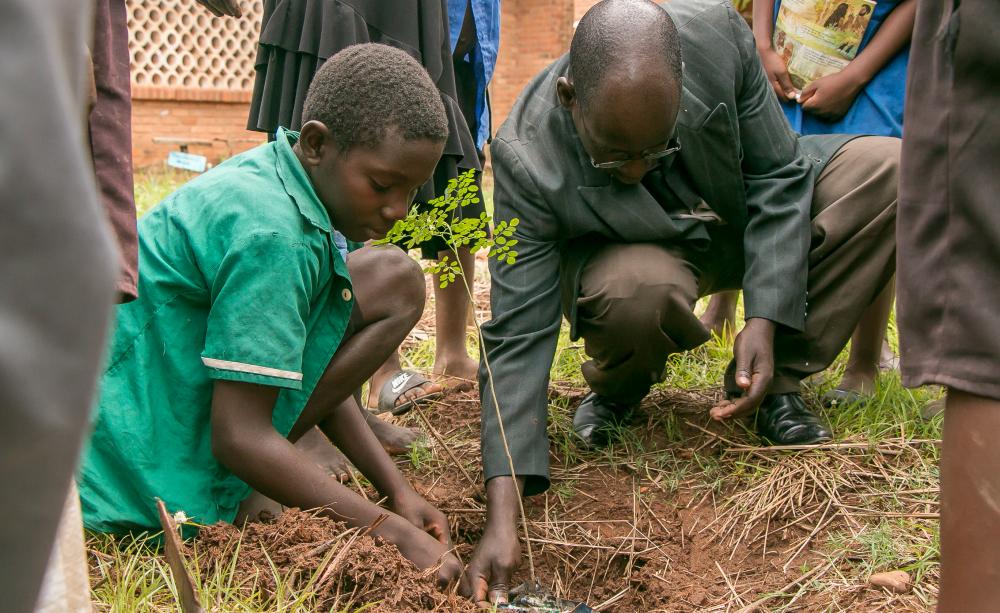 Malawi School Permaculture Clubs (MSPC) was started in 2015 and proved to be an instant success with the teachers and pupils in rural northern Malawi.

It was designed specifically to give interested teachers the information, skills and basic resources they need to change their own circumstances with some, but very little, outside help.  It encourages people to look and learn from their differing unique positions and share these experiences and resources back into the wider group.

The majority of the population in Malawi are subsistence farmers who are at the mercy of the yearly weather and changing climate and this access to relevant skills as well as the continuation of older practices can increase their resilience in an unpredictable world.

The recent report by the UN IPCC declared that we now have twelve years in which to avoid catastrophic effects brought about by climate change.  At the same time the WWF reported that we have lost 60 percent of the planets diversity since 1970.

The environment is once again back at the top of the news, but for how long and - most importantly - will this lead to the big changes we need to see from Government and individuals if the worst effects are to be avoided?

Those of us interested in environmental issues find that they have never really fallen from the agenda.  Seminal works in the 1970s - such as Racheal Carson’s Silent Spring and Schumacher’s Small is Beautiful - started to document the effect that humans, and in particular industrialisation, were increasingly having on the planet.

In the 1980s we heard about the hole in the ozone layer and I remember as a child switching to pump action hairspray because of it. We seemed to be learning.

Forty years on though, very little has changed and in too many areas the Government has failed to lead the way and even dragged its feet with issues related to the environment.

Painstakingly slow reforms over recycling aren’t the answer unless we also tackle the amount of waste we are producing, as we see by the recent highlighting of the plastic problem.

Increase in the efficiency of cars is no good if the numbers on the road constantly increase. Advances in renewable energy matter less when we are constantly increasing the amount of power we use.  Water saving techniques are almost pointless if we continue to increase the uses of water, as development does.

Worldwide, certain countries might make the changes but the whole world is on a steady growth trajectory with very little seemingly able to change it.  It was once stated that if everyone used the same resources as an average European, we would need seven planets to sustain the population. As of writing, we haven’t found these yet.

The recent NASA report on the hole in the ozone layer shows it is shrinking again and highlights that changes in behaviour do bring about positive results.  So why has there been this lack of proper action by Governments when, as we see, action can result in changes.  It definitely seems to be business as usual, especially with the election of Trump in America and Brexit this side of the Atlantic.

In a world in which we rely on our government to make the right decisions, we could end up in a very vulnerable position.

The UN report stated that wholesale changes are needed to our life and social systems if we are to prevent the worst effects of climate change.   Yet this is somehow cited as a reason it’s not happening.  But how can we ignore it, when we need to preserve the life systems of the earth that we depend on?

The recently formed protest group Extinction Rebellion have called for the start of a mass civil disobedience campaign in response to the governments’ inability or reluctance to act in the face of the environmental crisis.  They state that they are forced to act by the governments’ lack of action and the lack of any other legal option available to challenge the status quo, which ultimately threatens the planet.

Naomi Klein states in her recent book No is Not Enough that there has been a corporate takeover of governments and the real control is now with business.  Indeed many of the largest corporations have bigger incomes than many countries and the relaxed financial rules since the 1980 allow them to evade laws more easily.

She also stresses that it is not only important to understand the powers that  these politics serve, but also to offer a different path and a way forward;  to support and guide those people who are willing to pursue an alternative vision.

I finished my degree in Development Studies and first heard about permaculture while volunteering at The Centre for Alternative Technology (CAT) in the nineties.

A specific definition of permaculture can be quite difficult to articulate. Bill Mollison argues that the overall aim of permaculture design is to produce an efficient low-maintenance productive integration of plants, animals, structures & man.

This discovery changed the direction of my life and instead of focussing on the political, I decided to focus more on the solutions.  The environment became central to my life and I felt that it was becoming an increasingly difficult space in Europe to effect real change.

There was a greening of business and language which made everyone feel they were getting involved, yet very little really changed.  While it is possible to opt for an alternative path, by choosing to live outside societal norms, it is very hard work, and the options are limited.

After always having a passion for Africa I left for Malawi in 2001, initially volunteering at Lukwe permaculture camp.  As soon as I arrived in the country I felt that it had the potential of sustainability and there was already quite an established permaculture scene.

Malawi clearly had problems and still does. It is one of the poorest countries in the world.  It also has massive potential in terms of diversity of environment, water, social networks, and the population’s access to the land.

Malawi has definitely been disadvantaged and its people vulnerable because of their harsh environment, poor communication, transport and lack of government support. But these conditions also mean that now, when real changes are needed, they can be at the forefront.

In a world in which governments are unable to affect the change we need, a lack of government control could be beneficial. There is the potential to bypass the two hundred years of industrial development and be in a much more sustainable situation than in the so-called advanced West.

In Malawi, systems are already decentralised and people have access to land and resources. The improvement of telecommunications allows better access to relevant knowledge, information, markets and skills that are relevant for people to change their own situation.

After many years working on environmental and information community projects through my small charity Butterfly Space, Kate Swatridge and I started MSPC.

It is based around an after school permaculture club for up to forty children during which the teachers cover topics like compost, deforestation, nutrition and seed saving.  It aims to empower teachers - providing transferrable skills, knowledge and basic supplies that can help them to improve their own health, livelihood and opportunities.

In these remote parts of the country that often have very little input from outside, MSPC has proved immensely popular.

The specific intention was to offer a transferrable model that allowed interested teachers to opt in to the programme and receive training, teaching materials, resources and support throughout the year in order for them to run a successful programme. This self-selection of the schools has been central to its success.

Moses Yakota, teacher at Chinguluwe Primary School, said: "I really love the permaculture work, it teaches us the skills we need to look after ourselves, and not be so reliant on the Government for jobs".

Subsequent years saw five and six schools sign up so that this year we are working with fifteen government schools in Nkhata Bay District.

In 2018 we were winners of the Lush Spring Prize for social and environmental regeneration which has allowed us to fund this expansion.

The schools are increasingly remote, with many inaccessible during the rainy season.  We are developing their resources and links with others in their cluster so that will enable them to be less dependent on us over time.

There has been interest from further afield, in Malawi and worldwide, and we are currently piloting the programme with five remote schools.  We will learn how we can best make it widely available on many platforms.

Worldwide, it is clear the environment is still under pressure, that changes taken so far are insufficient and that we really do need to challenge the economic systems that underpin society.  The current politics seems to hinder that rather than lead the way, the government are increasingly unable or unwilling to act.

We need individuals and organisations to take things into their own hands, to work on solutions that inspire and protect humans and the environment, and to provide populations the world over with the tools they need to adapt to and reduce climate change.

You can visit the christmas gift shop for Malawi schools permaculture club here.

Josie Redmonds studied Development Studies at Swansea University.  Volunteering at  CAT inspired her to leave for Malawi in 2001. Butterfly Space (Registered Charity No 1148162) was established with Alice Leaper in 2007, working on several community projects. MSPC was started in 2015 with Kate Swatridge - find out more on the MSPC Facebook page.