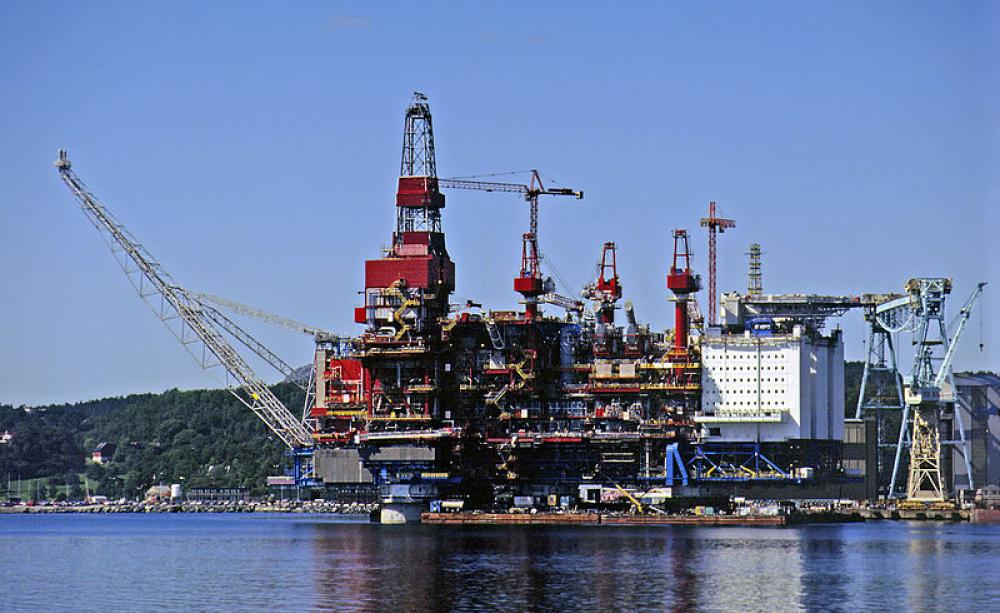 The Statoil production platform 'Gullfaks A' being completed near Haugesund in Norway in 1988.

Wikipedia
Creative Commons
Young Friends of the Earth Norway and Greenpeace lost a historic case against the Norwegian government yesterday over new licenses for arctic oil drilling. Though a visible and damaging loss, permeating through are billows of optimism and shifting environmental governance. KATIE HODGETTS reports

Environmental activists Young Friends of the Earth Norway (Natur og Ungdom) teamed up with Greenpeace to take the Norwegian Government to court for opening up new areas for Artic Oil Drilling in November last year.

The environmental group of over 7,500 members called for the Norwegian government to halt all 10 new oil licenses in the arctic, as this would violate both the Paris Agreement and Norway’s own constitution which states that authorities will take measures to secure the right for people and future generations to a healthy environment.

Disappointingly, it was announced yesterday that this historic case was lost, as the Oslo district court decreed that exploration for new reserves did not violate citizens’ constitutional right. Instead, it claimed: "Norway is only responsible for the greenhouse gas emissions within its borders, not those causes by burning exported oil and gas".

Therefore Norway, one of the world’s largest exporters of oil and gas, has self-decreed that it is not responsible for CO2 emissions caused by hydrocarbons exported to other countries, avoiding all climate responsibility to its people, its future people and the planet for bringing new oil and gas reserves into production.

This kind of individualist thinking, inspired by the neoliberal doctrine, hampers the collective action required to meaningfully mitigate climate change. We risk serious consequences if this ‘out of sight, out of mind’ attitude becomes another Norwegian export.

In response, Ingrid Skjoldvær, chair of Young Friends of the Earth Norway, told The Ecologist: "Of course we are disappointed. We know that fighting the most powerful industry in Norway is going to be tough, so the verdict is not a huge shock.

"But we still think that we have a strong case, and we want to take this case further. Hence our next task is to see if this is economically and legally feasible."

In a twist of cruel irony, the verdict, just like the oil and gas it concerned, will have implications far beyond its designated borders.

The loss has been felt not simply by Greenpeace and YFoE activists, but by the global environmental movement attempting to scour corporate interest with people power, by future generations that will walk into a warmer world and by the youth voice that continues to struggle above water.

More physical impacts come from the drilling, which will put more greenhouse gas into our atmosphere, contrary to the plethora of evidence that if we are to avoid 2 degrees centigrade warming, all fossil fuels need to remain in the ground. The accumulating scream of science is again muffled by the obnoxious noise of drills.

However, there is cause to celebrate victories, as small as they may seem. Firstly, the case was historic in that it saw young people mobilising for democracy and their future.

Since 1988 when James Hansen first testified in front of Congress that the world was warming, decisions about climate change have been dominated by the very bodies made up of people who won’t be around to feel it.

Whilst climate change will affect young people the most (particularly those that are BME, female and from the global South), the majority do not have the age credentials even to vote. This court case has been a symbolic step in reinstating the youth seat at the decision makers' table.

Secondly, it’s a loud reminder that young people are not alone in their strife. Cases like these that pit money versus man seldom inspire hope for young people.

However, as Ingrid poignantly argues: "If you feel disenchanted then look around! Young people all around the world are making a difference. My best tip if you feel a bit dis-empowered is to organise yourself in an organisation. It’s a great way to meet other like-minded and to put more force behind your demands.’

In the UK, grass roots action is already happening, with the UK Youth Climate Coalition celebrating its 10th year anniversary and mobilising for its 2018 campaign against fossil gas.

Thirdly the case perhaps signals a shift in global governance. The drilling was stunted not by the bounds of international regulation, nor the condemnation of neighbouring allies, but by the incumbent force of Norwegian youth power.

Perhaps we are shifting to an environmental paradigm where young people are taking centre stage? If Jeremy’s Corbyn’s summer success is much to go by then perhaps collective youth are far more able than generations of repression suggest?