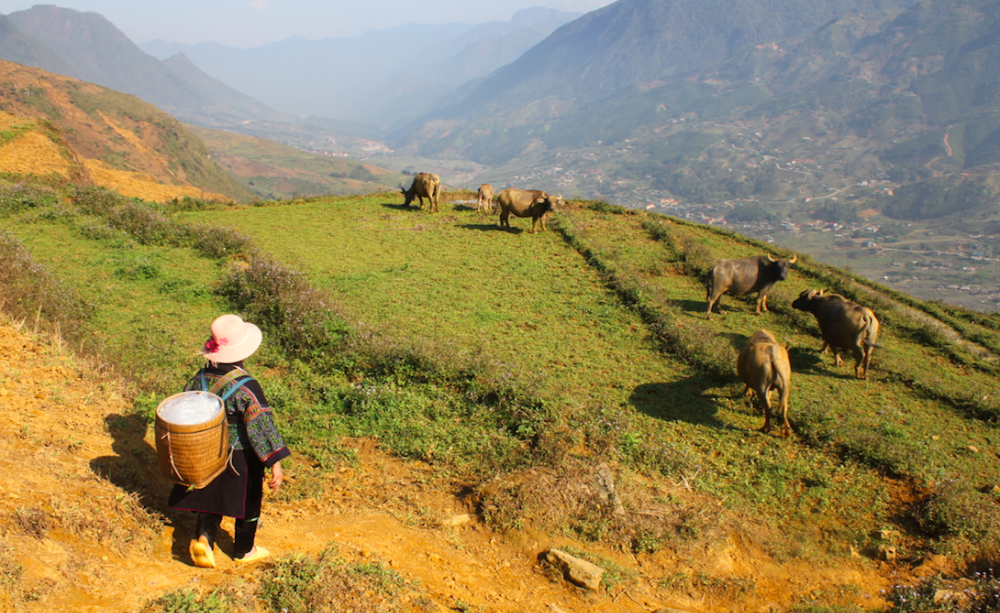 The plastic issue is immense and it’s growing.

A growing number of ethical trekking companies in Vietnam’s northern Sapa region are reinvesting their profits back into the local community to help empower marginalised tribes.

Human trafficking, plastic pollution and severe poverty are among the serious problems affecting the Hmong and Red Dao ethnic minorities in the region.

Companies including Ethos - Spirit of the Community, Sapa Hope Centre and Sapa Sisters want to eradicate these problems by providing education and employment through a range of ethical trekking packages.

“A lot of the tribes are frowned upon”, explains Ethos cofounder Phil Hoolihan. “Partially because they are deemed to be uneducated but I think a lot of that stems from the fact that they fought with the Americans during the [Vietnam] war.

“They are also relatively new immigrants. The Hmong have only been in Vietnam for about 300 years and those two things combined means that there’s a lot of social animosity - albeit less now than there used to be.”

Phil set up Ethos with his wife Hoa in 2012. The organisation had been operating as a charity since 1999 but later turned into a social enterprise to provide more proactive support to community through generated profits.

Ethos estimates that poverty rates among the tribes exceed 80 percent, causing the groups to be marginalised from society, with little representation or voice in public and political debates.

Such high levels of poverty coupled with low levels of education have left the ethnic minority communities vulnerable to the likes of human trafficking.

In 2016, 11 girls from one small village alone were trafficked from the region. They were all under the age of 18 and belonged to regional tribes.

Part of Ethos’ educational programmes include basic advice for young girls on what to do if they are captured. For 22-year-old Hmong tribe member Giang Thi Ca, the workshops are vitally important for the community.

“My sister-in-law was kidnapped when she was 15 years old,” Ca explains. “She was sold from one family to another.”

Transported over the border to China, Ca details how her sister-in-law eventually managed to run away, after making a decoy from blankets and covering up in oversized clothes. “When she escaped, she tried to call her family but couldn’t because she didn’t know about international dialing codes.”

Such horrors spurred Ca to get involved with Ethos’ workshops to help educate younger girls on the realities of human trafficking. Sapa Sisters and Sapa Hope Centre are running similar initiatives.

Peter Thuong, who founded the Hope Centre in 2010 is trying to get more Hmong high school-age children back into school, whilst creating new job opportunities for their parents.

The plastic issue is immense and it’s growing.

Sapa Sisters, which was founded in 2009 by a group of six friends, focuses specifically on empowering women in the area, who the company believes are particularly vulnerable to exploitation.

Through trekking and guiding, the women are able to earn additional money with Sapa Sisters – a welcome financial boost to their more traditional farming income.

Ethos has also developed an innovative banded wage structure with the minority groups, which enables the families to earn more money depending on the trekking tour they work on that week, as well as providing compensation for any food bought for the tourists during the trek.

So far Ethos employs 22 people of which around 65 percent are Hmong and 20 percent are Red Dao but the benefits go beyond the small team.

“Those 22 guides are eating in a number of different houses on different days which means the recipient families, purely from trekking, is at least 80 in this area,” explains Phil.

Financing and administrative support for medical care is also available through Ethos as well as additional environmental awareness programmes - the latter of which is boosted by Phil’s background in environmental science.

Most recently the organisation is looking at developing stoves that burn wood more efficiently in a move to use less forest resources and this year it will be working with an organisation called Plant for the Planet, with an aim to plant around 10,000 trees in 2018.

Beyond its work with the local community, Ethos has also developed an ethical trekking guide to be distributed to tourists throughout Sapa, regardless of whether they choose to tour with Ethos.

Crucially, the guide urges tourists to bring any non-biodegradable waste back to the main town rather than leaving it in a homestay bin. “The plastic issue is immense and it’s growing,” says Phil.

“If you look at the busier villages, we [the visitors] take the trash and put it in litter bins in the homestays but the homestays have got nowhere to put it so they put them in plastic bags, tie them up and throw them in the river. Awareness among travellers is so important for this reason.”

Such initiatives are going a long way to preserve, protect and empower this part of Vietnam which is fast becoming a tourist hotspot.

Robyn Wilson is a freelance journalist, currently writing and travelling across Asia. She is a former news editor at Construction News. She tweets at @RobynFWilson.