From Trump to May: How a US-UK network pushes climate science denial 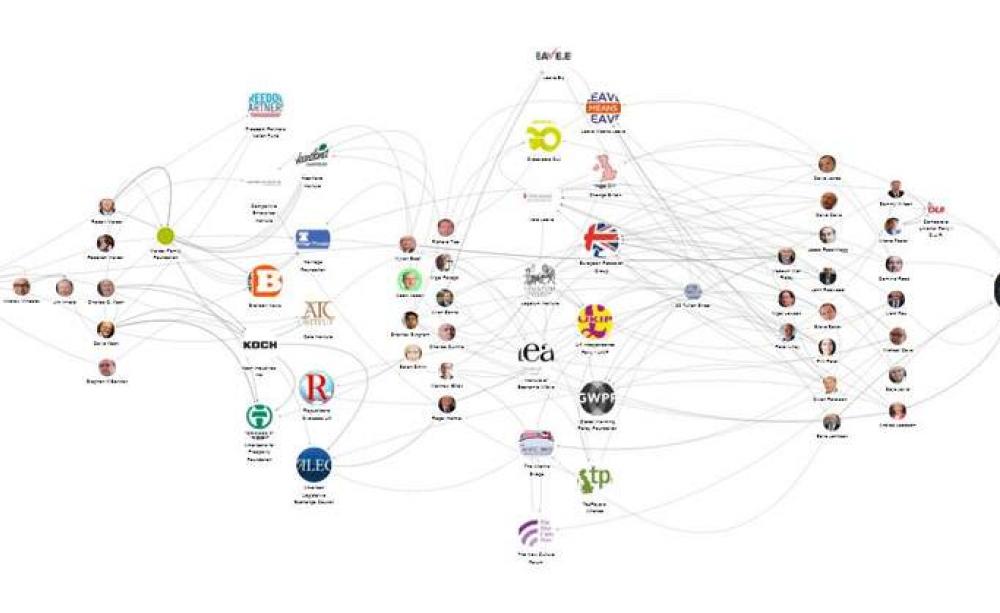 x
x
The transatlantic network of fossil fuel funded think tanks has been constructed over more than half a century - and has come into its own with the arrival of Donald Trump in the UK and his praise for Boris Johnson. MAT HOPE of DESMOG UK reports

With so many connections between the Brexit and Trump camps, the President’s visit this week may feel more like a homecoming.

Donald Trump has finally come to the UK - 20 months after he won the election to make him the 45th President of the United States.

During that time, a trans-Atlantic network of business people, think tank analysts, and lobbyists have grown in influence — pushing a free market ideology and spreading climate science denial on both sides of the Atlantic.

DeSmog UK first mapped the network when Trump was sworn into office in January 2016. Things have moved on a bit since then.

On the eve of the President’s UK visit, over 100 scientists signed a letter urging Theresa May to challenge Donald Trump’s climate science denial. To mark the occasion, DeSmog UK has updated the network map, showing all the key connections between the actors in the shadows pushing to lighten environmental regulations and dampen corporate accountability in the US and UK:

From Trump to the UK

First there was Scott Pruitt, a lawyer funded by the fossil fuel industry that was fond of trying to stop the EPA’s clean power plan in the courts. After Pruitt resigned in the wake of multiple allegations of inappropriate use of EPA funds, Trump appointed another coal lobbyist to replace him — Andrew Wheeler. He was a staffer of climate science denying US Senator Jim Inhofe. Inhofe once held up a snowball in Congress to try and disprove global warming.

The Mercers and the Kochs fund a number of organisations that tie Trump and his administration to the climate science denial and Brexit lobbying in the UK, including the Competitive Enterprise Institute, the Heartland Institute, The Heritage Foundation, the CATO Institute, the American Legislative Exchange Council (ALEC), and Americans for Prosperity.

These groups use a number of actors as conduits to spread their money, resources and ideas into the UK.

One organisation that rapidly grew in influence after the Brexit referendum was the Legatum Institute. OpenDemocracy revealed how Legatum got privileged access to UK government ministers, with all the links and meetings mapped by DeSmog UK.

Legatum hired two US lobbyists with ties to climate science denial organisations — Alden Abbott and Shanker Singham. Abbott authored a report for the Heartland Institute, and was a Deputy Director at The Heritage Foundation, while Singham was a policy expert for the US-based Heartland Institute.

Singham is often credited with working inside government to push for a Hard Brexit. Singham had begun advising PR and lobbying firm Grayling about Brexit, Open Democracy revealed. This was a problem, as Singham was a member of International Trade Secretary and arch-Leaver Liam Fox's trade advisory team. Singham said there is no conflict of interest, but stepped down from his trade advisory role anyway.

The controversy saw Singham shuffled out of Legatum. He now works for the Institute of Economic Affairs, which has strong ties to organisations based in a building that acts as an incubator for climate science denial and deregulatory ideas in the UK— 55 Tufton Street.

One resident, the Taxpayers’ Alliance, was set up by Matthew Elliott, now a Senior Advisor at Legatum. Elliot was Chief of the Brexit campaign group Vote Leave. He recently visited the US to work on the US-UK trade deal, alongside Singham.

There are other links, beyond Legatum.

Myron Ebell, a Director at the Competitive Enterprise Institute and a member of Trump’s transition team, is an ally of the UK’s premier climate science denial campaign group, the Global Warming Policy Foundation (GWPF).

Ebell spoke at an event organised by the GWPF in January 2017. At the event, he said he considered the “climate industrial complex”, which included everyone from climate campaigners to publicly funded scientists, as one of the “most dangerous” threats to society.

When asked where he got his information on climate change, if not from experts or scientists, Ebell said he was “very skeptical of expert opinion when it becomes group-think and experts gang up against public”. He pointed to Brexit as another example of the public rejecting expert opinion. When asked what special interests he was representing, he replied “freedom”.

And then there are Arron Banks and Nigel Farage, famously photographed in a golden elevator with Donald Trump in November 2016.

Farage, former leader of UKIP and the Leave.EU campaign group, has spoken at The Heritage Foundation. One of Brexit’s main funders, Banks has also been invited to Heritage Foundation events, as well as speaking at the CATO Institute — both of which promote climate science denial and rampant free-market capitalism.

Tory Politicans and the UK Government

All of these conduits are significantly involved with pro-Brexit groups, which have the backing of numerous Tory politicians and cabinet members.

For instance, Leave Means Leave, a group campaigning for a hard Brexit, had new Brexit Secretary Dominic Raab on its political advisory board.

Leave Means Leave was also supported by some of the UK’s most prominent climate science deniers such as former Tory MP and now Lord Peter Lilley, and Democratic Unionist Party (DUP) MP Sammy Wilson. It was also supported by libertarian Tories calling for deregulations which have previously pushed disinformation on climate change including Jacob Rees-Mogg, John Redwood, Christopher Chope and Ian Paisley Jr, to name a few.

Former environment secretary Owen Paterson is also a member of the group. Paterson and Lilley are both affiliated with the GWPF, and Paterson delivered a speech to the Competitive Enterprise Institute in October 2017.

Raab was also co-founder of Change Britain, which was set up by members of Vote Leave after the referendum. Change Britain’s patron is Lord Charles Guthrie, a former Field Marshal, who has been implicated in deals to buy Siberian gold alongside Arron Banks.

Raab is not the only cabinet member with strong links to the US. Just weeks after his appointment as International Trade Secretary, Liam Fox met with over a dozen Heritage Foundation members – including its president and former Tea Partier Jim DeMint and several individuals who became part of the Trump administration. Fox’s former special advisor when he was Defence Secretary, Luke Coffey, now works for the Heritage Foundation.

Fox was also the founder of Atlantic Bridge, a neoconservative thinktank aiming to promote a “special relationship” between the UK and United States. In 2007, the group established a partnership with free-market lobby group the American Legislative Exchange Council (ALEC), known for producing template pieces of legislation that reduce protections for the environment and other anti-regulation efforts. Atlantic Bridge operated until September 2011 when it was dissolved following a Charity Commission investigation.

While not a pro-Brexit cabinet member, new Home Secretary Matt Hancock has also accepted cash from a key donor to the climate science denying GWPF. He has received £18,000 in donations from businessman Neil Record over the past four years.

Johnson’s Brexit co-conspirator and now Environment Secretary Michael Gove was also involved with Atlantic Bridge, and sits on the Advisory Committee of another 55 Tufton Street outfit, the New Culture Forum.

Gove, Fox and Johnson are all Brexit figureheads, and all recently held meetings with Singham and Legatum.

With so many connections between the Brexit and Trump camps, the President’s visit this week may feel more like a homecoming.

This article first appeared at Desmog.uk