From slums to symphonies - Vartan Melkonian's life as a refugee 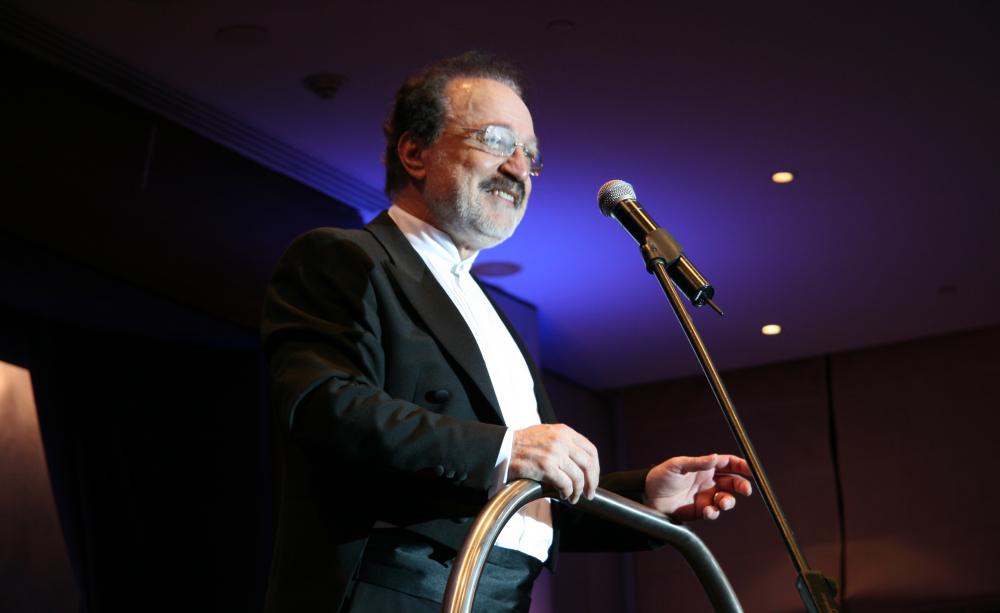 Vartan Melkonian learned to harmonise to beg on the street - and later wrote a world famous symphony.

Vartan Melkonian
Refugee Vartan Melkonian is a world-renowned conductor and spokesman for the UN. He speaks to LAURA BRIGGS about how being born a 'street slug' in a refugee camp in Lebanon shaped his life to mark World Refugee Day

I feel sorry for people who have not lived on the street and found food in the rubbish bins, and cooked spiders legs on the beach and experienced that struggle.

Vartan Melkonian was taken to the Lebanon by his refugee parents.  His mother died until he was eight and he was taken to the Birds’ Nest Orphanage. From there he was subjected to living rough in the slums of Beirut.

“I can only look at it dispassionately from an adult point of view now," Vartan told The Ecologist. "At that age, you accept it is your life. You are constantly on the lookout for the authorities, but that seemed normal then. You make decisions crucial to your own existence.”

Life as a child on the streets was an everyday struggle for Vartan. What may be seen as beautiful moments for most, were times of worry for him.

“People take moments of pleasure by looking at the sunset. For us, for me, it was the worst time of the day, there was nowhere to go.

"We, the children of the streets, were often chased away with sticks and stones, even by the police, so we were not seen on the street, as if we were some sort of living plague.”

Vartan taught the other street boys how to harmonise in order to raise money by busking. Later, he moved from job to job working as an illegal fisherman, and then becoming a mechanic. When he fled the civil war in Lebanon in 1972, Vartan’s life changed.

“When I was in Lebanon I used to play the guitar, and I thought I was really good. Arriving in the UK in the early 70s, I went to Kings Cross Station and I saw a busker playing the guitar and my eyes widened. I thought 'I know nothing!' It was like being born again at the age of 26."

He added: "My first experience of the UK was overwhelming; it was like entering into a heaven.”

Vartan’s musical beginnings from teaching harmony and playing the guitar stood him in good stead, and from being entirely self-taught, he went on to become a singer and producer in the West End.

It was when he wrote a symphony that was eventually performed by the Royal Philharmonic Orchestra that his life changed for good.

Since that moment he has gone on to conduct all over the world in some of the grandest music halls.

Aside from this huge achievement, he has also became a spokesman for the UN, working as a humanitarian ambassador for street children.

He said: “I feel sorry for people who have not lived on the street and found food in the rubbish bins, and cooked spiders legs on the beach and experienced that struggle.

"That’s when you really appreciate what you have. Then every day I feel it’s a blessing, we are guests and we have to behave like guests. I am very grateful and I ask others to be grateful.

“I look with wonder at my own children and the way they come back from school and throw their back packs down on the floor and ask ‘what’s for dinner?’ Being a child on the streets really impacts your life, but it gives me great pleasure to see my children having such comforts.

“Children are like money. Money has no power to do bad or evil on its own. It cannot be bad or good, only the authorities have that choice to use it for bad or good. Children are not to be seen as trouble, but as future investments.

"They have as much potential as anyone else. It’s up to authorities to use it.”

Vartan doesn’t bat an eyelid when he’s rubbing shoulders with the likes of George Clooney and the Prince of Wales because, he said, when you have nothing, that’s when your imagination is at its greatest.

Proud of his past

“When you don’t have things, your imagination flourishes and when you achieve something, you've already lived it. For me, I'd already experienced the marble staircases of palaces in my dreams.

“Street children have lived in a different world than those in a sheltered life and I am so grateful to have lived on the streets.”

Now Vartan can look back and be proud of where he came from, and spread the message that orphans and refugees are to be nurtured.

He said: “When my daughter was about six years old, we were driving in the car with her friend. The friend said to her, 'my daddy’s in the Army'. To which my daughter said proudly, 'my daddy’s an orphan'.”

Laura Briggs is a freelance reporter. She tweets @WordsbyBriggs. Find out more about World Refugee Day.