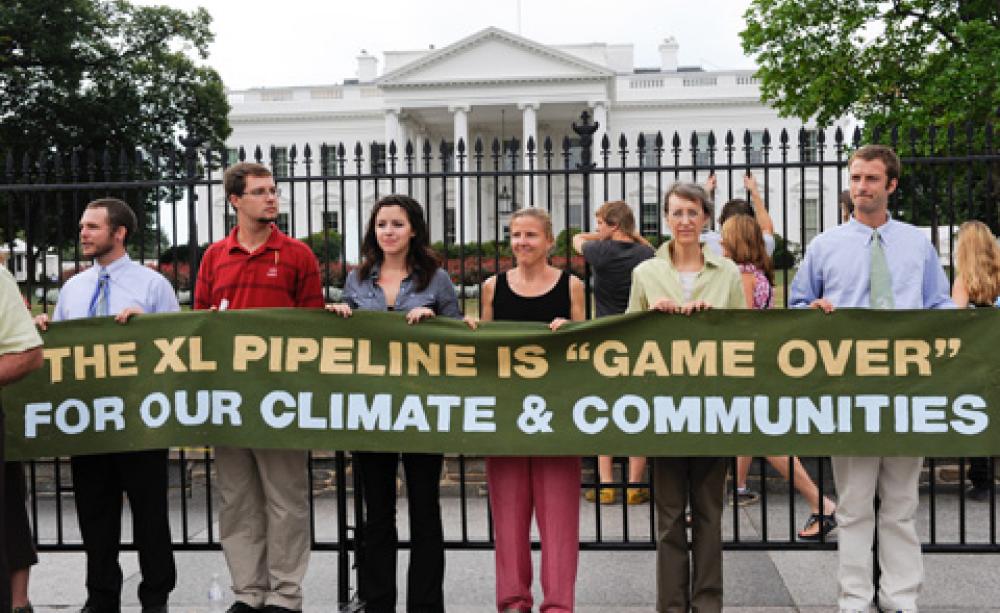 For many, these new pipelines are the frontiers of new fossil fuel infrastructure.

US Federal Judge Brian Morris has struck a major blow to President Trump’s pro-business, anti-climate agenda of supporting as much new fossil fuel infrastructure as possible.

Morris blocked the construction of Keystone XL in response to a lawsuit filed by the Indigenous Environmental Network (IEN) and North Coast River Alliance.

This is just the latest moment in the rollercoaster struggle against the Keystone Pipeline System and its continuous expansion since it was commissioned in 2010 under the Obama administration.

Obama delayed the XL expansion in 2015 due to a mammoth campaign of resistance led by local Indigenous communities.

One of Trump's first acts in office was to use executive orders to permit the construction of Keystone XL at the same time as the infamous Dakota Access Pipeline (DAPL). Trump's approval immediately boosted the shares of the two companies behind the pipelines by 3.5 percent.

Dallas Goldtooth of IEN reported: “Judge Morris has ordered a new [environmental impact survey]” to answer five key questions about the pipeline’s contribution to emissions and Trump’s motivations for reversing Obama’s decision. The judge also ordered a cultural survey to consult Native tribes. This survey could take between six months to a year.

For many, these new pipelines are the frontiers of new fossil fuel infrastructure. They may not themselves do the work of extraction, but they are essential to realising the profitability of fossil fuel companies’ oil and gas reserves.

Pipelines make transporting fuels far more efficient. After they are built, the economy is essentially locked into extracting fossil fuels to pass through them to make the infrastructure financially viable.

The companies, banks and governments that invest so much financial and political capital in pipeline approval and construction simply cannot afford for them to lie dormant.

Keystone and DAPL both service the controversial and widely opposed tar sands in Alberta, Canada. New pipelines would increase the capacity of companies profiting from the dirtiest fossil fuels to distribute them across North America.

The battles over proposed oil and gas pipelines spanning North America and now Europe exemplify the depth and complexity of the relationship between fossil capital, private finance and the state.

Alongside Keystone XL and DAPL, TransMountain has become a defining wedge in Canadian politics and the Trans Adriatic Pipeline faces fierce opposition in Southern Italy and across Europe. These pipelines would not be possible without the support of banks and governments globally.

Trans Adriatic Pipeline enjoys the benefits of political and financial backing of the unaccountable European Commission and associated banks including European Investment Bank and European Bank for Reconstruction and Development.

Justin Trudeau’s Liberal administration is Canada is so committed to making Trans Mountain happen that the Canadian Government spent an incredible 4.5 billion US dollars nationalising the project and taking it out of the hands of private companies and finance.

Grassroots opposition has often brought to light contradictions within the state. At Standing Rock, those protesting DAPL suffered the most widely reported police violence. They faced rubber bullets and water cannons in the freezing night.

State repression of this and other kinds - from FBI spying around Keystone XL protests to placing whole communities on lockdown in Southern Italy - is a feature of the battles over new pipelines.

At the same time, it is other levers of state power that are now proving crucial in the resistance to fossil fuel extraction.

The courts are upholding basic environmental protections on request of grassroots organisations like IEN, in the face of heavily militarised police and the government’s attempt to force these projects through.

Court orders are unlikely to totally shut down projects like Keystone XL, but leveraging existing law and regulation can win campaigners vital time to exercise other elements of a broad strategy against fossil fuel infrastructure.

Organising for banks to stop financing these projects and the companies behind them must be a key pillar of that strategy.

The Governments of Trump and Trudeau alongside the unaccountable technocrats of the European Commission may be totally committed to the narrow economic interests of fossil capital and private finance so invested in these unnecessary pipelines.

But as long as campaigners build mass movements taking advantage of a diversity of tactics in opposition, we have the power to keep filthy fossil fuels like tar sands in the ground.

Chris Saltmarsh is co-director of climate change campaigns at People & Planet. He tweets at @chris_saltmarsh.