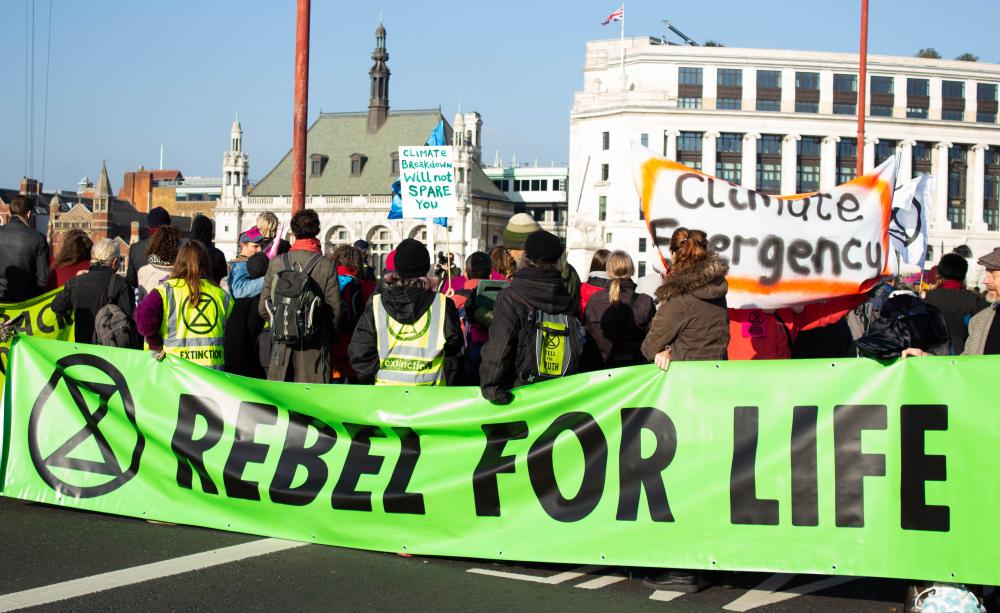 Until recently, standing in a road and risking arrest seemed a strange and frightening proposition.

A week of training with Extinction Rebellion (XR) gave me the trust and reassurance I needed to participate in my first direct action: the  blockade of Blackfriars Bridge.

The bridge protests taught me that - taken bravely and honorably - climate change has the power to bring us together in a united purpose that might just be enough to mitigate catastrophe.

The police are standing at the pedestrian crossing on the south side of Blackfriars Bridge, waiting for us. It’s 11:01, 2 minutes to go. Janie, our group leader, is pretending to read the bus timetable on a nearby lamppost. Nicola and Paul are chatting on a bench.

Tim and I loiter at the corner of some stone steps, our eyes flicking from the pedestrian crossing to each other’s frightened faces. It’s too late to go back. We have to go through with it now.

Some passersby are approaching the crossing. The green man flashes. Now Janie is moving, she’s standing in the middle of the lane alone, both arms out.

We’re hurrying in to join her in a confused huddle that morphs in to a sheepish line. Most of us sit down behind the line and link arms. The police calmly surround us, but make no move to disrupt the roadblock.

Down here on the tarmac our fear has dissipated and we are in a moment of euphoric disbelief, as though flying. We feel a rush of joy at the absurdity of it all. We turn to each other grinning. More are coming and we have a crowd of 30, 40 people. A man is playing the harmonica, a young boy is sitting in a camping chair, we’re chanting: “Whose future? Our future! Whose children? Our children! Whose bridge? OUR BRIDGE!”

I have never been a rebel. Never skived school, done drugs or faked an ID. As an eco-firebrand at college I worked hard to improve the recycling policy and organise lectures on hot environmental issues. I certainly never imagined breaking the law.

On the morning of the Extinction Rebellion training I was somewhat cagey. At the door a bearded man greeted me with a jovial “Here to rebel?” to which I replied, “Yes well, maybe.”

Who was I associating with here? What manner of radicals might have flocked from the edges of society to revolt against the British government?

Inside however, I found to my relief that most people had, like me, stepped out of fairly conventional lives. My first conversation was with an ice-cream seller from Southbourne, then with a gardener from Cambridge, and a planner from a London borough council. We all felt compelled to act, but unsure of what that might mean.

After an introduction we were organized for the coming week’s protests. First we were put in to ‘affinity groups’ of twelve people. Then we did some role-play exercises for roadblocks such as confronting angry motorists, being interviewed by reporters, and dragging each other round the floor in mock-arrest. Later we had a legal briefing.

Despite, or perhaps because of the cringy role-play, a rare sense of comradeship developed in that room. Many of us, like me, felt vulnerable in taking direct action, and we bonded as I can only imagine a squadron would before combat.

Besides comradeship, there was also a mounting consciousness of impending catastrophe that was almost too much to bear. Several people spontaneously broke in to tears throughout the day.

It seemed a surreal dream in which we had to accept the end of human civilization, or get ourselves locked up in police cells. How had it come to this?

On the day, Blackfriars Bridge lay before us, empty and glinting in the sunshine. Our group left the pedestrian crossing and strode out on the empty road. On the horizon we saw our mirror image approaching us from where they had blockaded the north side and great cheers erupted.

Encamped in the middle of the bridge we felt like an island of hope, basking in the sunshine, surrounded by the hazy silhouettes of London’s towers and cathedrals. It felt as though we had already won. Climate change was sorted. We could go home.

As a child of the 90s, I’ve long had ecological crisis looming at the back of my mind. I remember one night, aged about 8, watching a news story about the disappearance of the Aral Sea. I lay awake for many hours seeing the dry lake bottom on the inside of my eyelids. Aged about 14 we were shown ‘An Inconvenient Truth’ in biology class. I spent the rest of the day in numb horror.

At university I took a class on climate modelling with an IPCC scientist. What was alarming was not what was known about climate change, but what wasn’t.

There was an awareness of tipping points such as rainforest dieback, but none of the models were accurate enough to predict all of the feedbacks from all of the components like clouds, oceans, forests, and soils. They were still a work in progress. It felt that climate change would outstrip our understanding.

After graduating I became disillusioned that academia was going to solve the climate crisis, and moved home to Scotland where I worked on farms and eventually set up my own veg box scheme.

But there is no hiding from climate change. For three years we had bizarrely cold summers and mild winters. Each chilly July afternoon, or warm November breeze substantiated to me what I learned about our dire trajectory.

In contrast to the growing despair inside my head, the conversation about the unusual weather was still small talk. I felt burdened by the unspoken truth. It made me terse when friends announced long distance flights and incredulous when they spoke about long term plans.

As nothing proportionate was being done about climate change, I started to accept that the ecosystem would collapse, and vaguely hoped that there would still be time for life to restore its complexity before the sun exploded in 5 billion years.

In my own life planning I found myself veering away from centres of population and considering which remote corners of Scotland might be the last to descend in to anarchy when food supplies ran out. I was slipping in to an attitude of hopeless, miserable survivalism.

Then came Extinction Rebellion. It felt to me as George Monbiot said on Blackfriars Bridge that day: “Something I have been waiting for, for a very long time is happening”.

After some hours of moving speeches and jubilant dancing we saw, coming along the north side of the Thames, an army of flag-waving protestors fronted with a green banner. It was the Southwark blockaders.

The thrill of seeing these reinforcements coming over the bridge was electric. On we all marched to the Waterloo blockade, where the great surge of fresh energy was repeated and then repeated again at Westminster Bridge, and in Parliament Square where Lambeth contingent joined us. Life was at that moment was full of a real sense of purpose, heroism, and love for everyone there.

I was worried about the idea of going back to the frustration and paranoia of facing climate change alone. But Extinction Rebellion has already given me a talking point to open up more honest conversations about climate change.

Through posting about the protests on Facebook several friends back in Scotland are now interested in creating a local group. The fear I had been carrying has been converted in to community energy.

This is a frightening time we live in, as sentient beings aware of our own potential extinction. Yet on that bridge, I had never been so fully aware of this precarious point in human history, and yet so joyful.

The names given in this article have been changed. Jane Smith is a pseudonym.