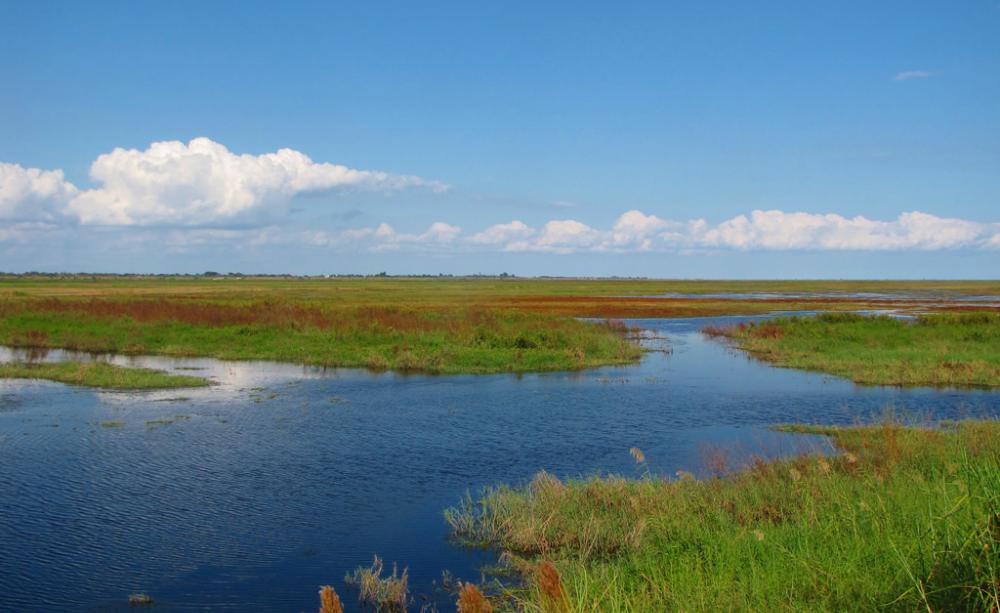 Flickr
B A Bowen Photography
Florida’s natural waterways have suffered from centuries of industrialised intervention.

With obstinance, humans have demonstrated the folly of trying to 'manage' an intricate ecosystem which we still do not fully understand.

Another sweltering summer descended upon Southern Florida in 2018, bringing with it a toxic green plague - yet again.

Expansive algae blooms have become a bi-annual occurrence in recent times marring both of Florida’s once pristine coasts, but there has never been a lost summer like 2018. It is now October and “red tide” still lingers on Florida’s West Coast, while simultaneously closing beaches on the East Coast.

Florida's ecosystems have been largely destroyed over the last hundred years due to haphazard development of the state, which disregarded (and continues to disregard) potential repercussions.

In the twenty-first century, Floridians are left to attempt to reconnect and reanimate what was once congruous and alive through managerial means similar to those employed by our forebearers. If we fail in this restorative endeavour, a slow but certain death awaits.

At the turn of the 20th Century, Florida — from Lake Okeechobee south — was largely one contiguous plain of sawgrass, forest, rivers and marshy wetlands. When Henry Morrison Flagler's railroad and droves of settlers arrived, it was determined by Flagler, Julia Tuttle, Napoleon Bonaparte Broward and other pioneering developers, that the land had to be made suitable to sustain modern industrial civilization.

Unfortunately, this process entailed the diversion of the natural flow of water via dikes, dams and canals. In the center of the state from Lake Okeechobee south, the building of canals to drain water allowed agricultural fields to be created at the expense of the once great and continuous “river of grass.”

With obstinance, humans have demonstrated the folly of trying to “manage” an intricate ecosystem which we still do not fully understand.

As a result, the drainage system created by the Army Corps of Engineers in the early 20th century, continues to wreak havoc on Florida in the present.

This management system entailed and has led to the straightening of the Kissimmee River to make lands suitable for raising cattle, and has eliminated the natural filtration systems that the river once had;

The building of the Herbert Hoover Dike after the Okeechobee Hurricane of 1928has cut off the natural flow of water from Lake Okeechobee to the Everglades. The diking, damming and diversion of Florida’s natural watersheds by way of artificial canals designed to provide water to cities has further inhibited the natural flow of water from north to south, preventing it from replenishing the Everglades.

Added to this, the construction of the Okeechobee Waterway was intended to artificially control lake water levels during the rainy season, but it pummels brackish coastal estuaries with billions of gallons of polluted freshwater during discharge events.

The alteration of Florida's historical hydrology has also led to a number of indirect consequences. The lack of clean fresh water flowing into the Everglades has resulted in a lack of fresh water flow to Florida Bay, inciting hypersaline conditions which cause sea grass die offs in the bay.

The Caloosahatchee and St. Lucie rivers were once expansive fresh water rivers, but are now polluted brackish waterways due to Lake Okeechobee discharges.

The nutrient-loaded waters of these two rivers fuel virulent algae blooms, which then destroy oyster beds, sea grass plains and coral reefs on the East coast, while fueling red tides on the West coast.

The water from Lake Okeechobee is not only freshwater entering a salt water environment, but it is also laced with toxic levels of nitrogen, phosphorus, heavy metals, blue-green algae and bacteria from agricultural and industrial operations.

Over the years numerous actions have been taken to restore Florida’s natural river of grass to its former glory, the first of which was the establishment of Everglades National Park in 1947, to preserve the southern quarter of the original Everglades ecosystem.

State legislation of the 80s and 90s helped to pave the way for the Comprehensive Everglades Restoration Program(CERP), passed by the United States Congress in 2000. CERP, the largest environmental restoration project in the history of the United States, is estimated to cost $10.5 billion and take upwards of thirty-five years to complete.

The essence of CERP is to restore as much of the historical hydrology as is possible in urbanized South Florida, remedying the dammed system of canals and pumps that exists today.

To this end, CERP includes plans to build canals to redirect water from central and eastern Florida directly into Everglades National Park and Florida Bay.

While CERP has made some progress, it has had trouble gaining traction due to its cost, scale and intervention by special interest groups, leading to additional legislation.

Faced with an algal pestilence nearly every year, Florida voters approved a Land Acquisition Fund in 2014 designed to allow the state of Florida to purchase land south of the lake in order to store, treat and release water south into the Everglades, rather than to the East and West coasts respectively.

At the earliest, the Everglades Agricultural Area (EAA) reservoir — required to treat and store water before sending it south into the Everglades —will not be completed until 2021. While the seasonal discharges from Lake Okeechobee continue to ravish Florida’s coasts, no end is in sight as of yet.

While farming is a noble and timeless tradition, it is best not to confuse the yeoman farmer and provider of nourishment with large-scale industrial operations like U.S. Sugar and Florida Crystals.

Lest we forget that these sugar companies pollute with blatant disregard for the natural world and receive huge subsidies and benefit greatly from tariffs placed on imported sugar. Let us also remember that these companies do not produce something of sustenance that is necessary for life, but rather a substance that takes away from life and has been linked to every American ailment, including obesity, diabetes, stroke, heart disease and more.

But we must refrain from placing the blame for our predicament solely on these two sugar companies — though they do bear a brunt of it. Similar environmental atrocities are occurring in the St. Lucie Waterway region, where theunabated and largely unregulated use of sewage sludge as fertilizer near the banks of the canal continues to fertilise a river stricken by regular algae blooms.

It is our job as citizens to use careful discernment to separate wheat from chaff and myth from reality.

While CERP must be expedited to send water south to quench the parched Everglades and begin the restoration of Florida’s coastal estuaries, we should similarly be leery of governmental overreach, lest we may lose access to the lands some of us are fighting so dearly to protect.

Florida will never again be a prolific virgin wilderness, though it seems reasonable to assert it may be restored to reflect its former greatness and biotic productivity.

Humankind should not seek to dominate, control, or “manage” nature, for as a whole we do not possess the knowledge or virtue necessary to successfully do so. Rather, humankind and nature should coexist as one: the former ceasing to abate the latter.

Nonetheless, we in the twenty-first century face a conundrum where we must allay the cavalier actions of our ancestors, who sought to drain the Great Swamp all those years ago.

As we move forward, let us always remember that it is easier to do something than to fix the unintended repercussions afterwards. If our ancestors would have applied the aforementioned maxim, we would not be in the predicament we are in today.

We have disrupted Florida’s natural rhythms and processes to such an extent that nature no longer regulates itself and it is no longer possible for us to sit back and let nature take its course.

In the future, we must foresee the ramifications of our actions and consequently begin acting in a manner that demonstrates our reverence for the natural world, which is so uniquely beautiful.

Drew Maglio is a writer and graduate student, currently studying at St. John's College. Hailing from Palm Beach County, FL, Drew has a B.A. in history from Palm Beach Atlantic University, where he was a member of the Supper Honors Great Books Program.