Transformation and resistance in the global fisheries sector 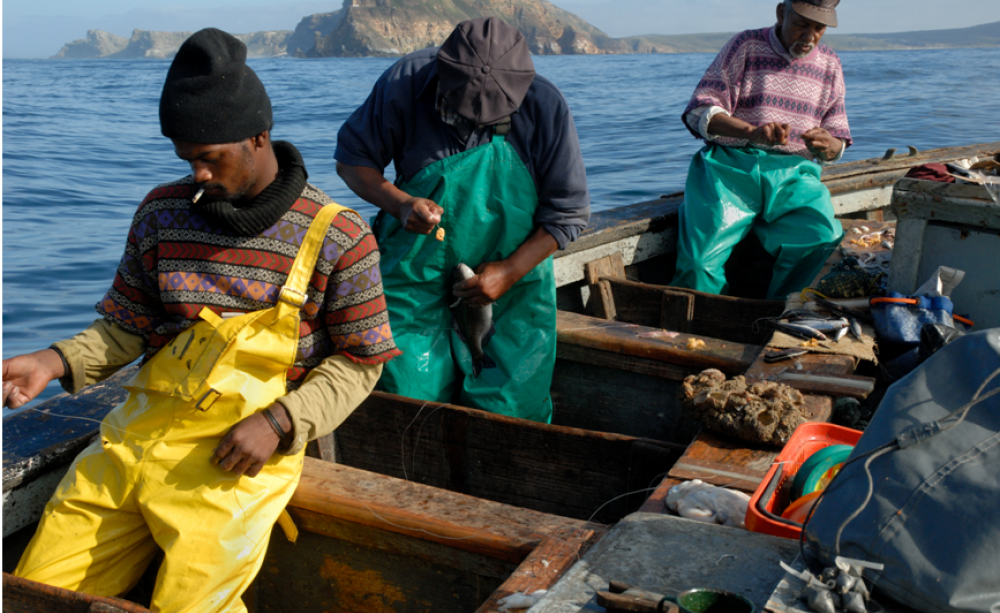 Handline fishers off the coast of Cape Point, South Africa

Rodger Bosch
Rodger Bosch
Global fish consumption has nearly doubled in the last 50 years. But the industrialisation of the fishing industry is taking a heavy toll on small-scale fishing communities. ELYSE MILLS writes about the rise of a global ‘fisheries justice’ movement

Movements of small-scale food producers and their allies offer alternatives based on social justice, sustainable production methods, and protecting the environment that rejuvenate hope for the way forward.

The global fisheries sector has experienced rising consumption and intensified pressures — particularly to meet the demands of highly populated countries like China.

Even relatively small countries like South Africa saw fish consumption increase by 26 percent in the last 20 years. South Africa also has one of the largest capture fishing sectors in the African continent, contributing approximately US$ 435 million to the national economy.

Capture fishing in South Africa is an important livelihood for many coastal communities. A large percentage of these communities engage in small-scale fishing.

Of the approximately 73,000 commercial fishers and subsistence fishers in South Africa, about two-thirds are considered small-scale.

However, despite making up almost 70 percent of the fishing population, the Department of Agriculture, Forestry and Fisheries’ national policies have historically not recognised the needs of small-scale fishers and the difficulties they are facing.

Instead, it has prioritised expanding the large-scale industrial fishing industry. This has sparked intense resistance from fishing communities.

In 2005, the government adopted a new long-term fisheries policy that left small-scale fishers without any access or fishing rights.

In response, a group of fishing communities, led by community organisations Masifundise and Coastal Links, took the issue to the South African Equality Court. After a trying case, the Court finally ruled in favour of the development of a new policy.

Movements of small-scale food producers and their allies offer alternatives based on social justice, sustainable production methods, and protecting the environment that rejuvenate hope for the way forward.

In 2012, the new Policy for the Small-Scale Fisheries Sector in South Africa was completed, introducing new strategies for managing the sector.

This policy aims to secure rights and access for communities, by prioritising human rights, gender, and development. This marked an important victory for South African fishers, demonstrating their capacity for mobilisation and to achieve change.

In 2014, Masifundise and Coastal Links also published Small-scale Fisheries Policy: A Handbook for Fishing Communities, providing fishers with accessible information on how the policy could be applied in their daily lives.

Developed partly as a response to pressure from fishing communities, South Africa’s new policy has set an important precedent for future fisheries policies, both nationally and internationally.

Masifundise and Coastal Links also played key roles in discussions with the FAO’s Committee on Fisheries (COFI), which led to the publication of the Guidelines for Securing Sustainable Small-Scale Fisheries in the context of Food Security and Poverty Eradication (SSF Guidelines) in 2015.

These guidelines were the result of a bottom-up participatory process that included 4,000 representatives from small-scale fishing communities, governments, fish workers’ organisations, research institutes, and NGOs.

The development of the SSF Guidelines and South Africa’s national policy, both signal an important shift in the perception and governance of fisheries sectors.

While small-scale fishers have been crucial contributors to the global food system for generations, their rights are only now beginning to be more formally recognised.

There appears to be an important connection between this newfound recognition and increasing mobilisation within fishing communities both nationally, and around the world.

The rise of a global ‘fisheries justice’ movement?

Increasing mobilisation among fishers, particularly within the last few decades, has demonstrated their commitment to participating in, and shaping, the transformation of the fisheries sector and its social and political contexts.

Their shared commitment to creating a fair food system has contributed both to a transnational convergence of resource justice movements (e.g. agrarian, climate, environmental), as well as the emergence of what could be a global ‘fisheries justice’ movement.

A key actor in this movement is the World Forum of Fisher Peoples (WFFP), of which Masifundise and Coastal Links are active members.

The WFFP holds a triennial General Assembly and an annual Coordinating Committee meeting for member organisations to come together, reflect on their goals and actions taken, and develop new strategies for the future.

In an era when power within the food system is increasingly being concentrated in the hands of a few huge corporations, movements of small-scale food producers and their allies offer alternatives based on social justice, sustainable production methods, and protecting the environment that rejuvenate hope for the way forward

Elyse Mills is a PhD researcher in the Political Ecology Research Group at the International Institute of Social studies. Her research focuses on the dynamics of fisheries and fishers’ movements in the context of global food and climate politics. She also co-coordinates the Initiatives in Critical Agrarian Studies (ICAS), and is part of the Emancipatory Rural Politics Initiative (ERPI) Secretariat. This article was first published at BLISS.