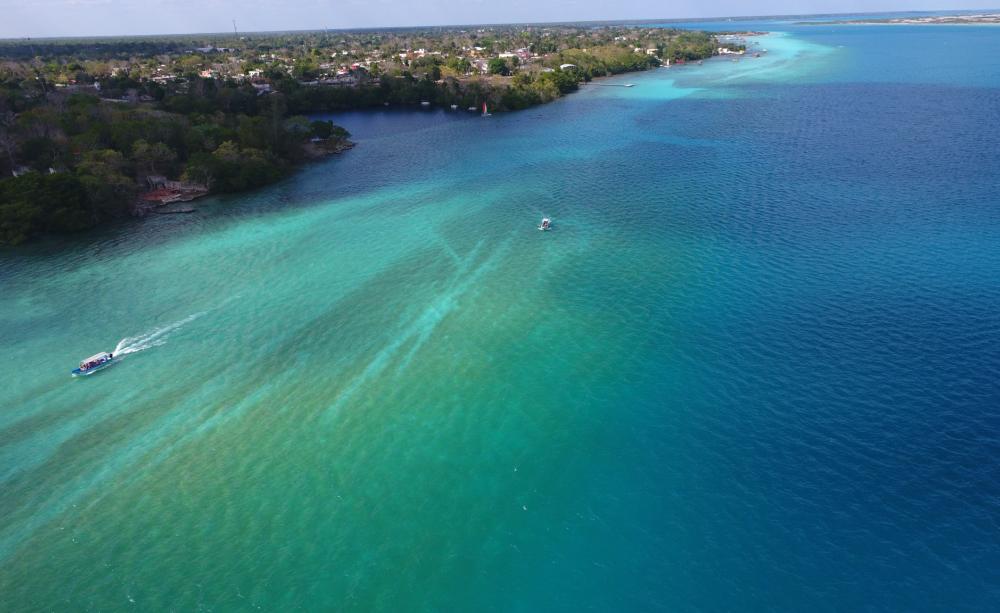 Agua Clara Bacalar
A tourism boom in the Yucatán Peninsula is threatening the delicately balanced ecosystems of the Laguna Bacalar. We must regulate tourism and pollution to better protect the ancient organisms that have thrived in its waters, argues HARRY SHEPHERD

The magical Laguna Bacalar, on the southern coast of Mexico’s Yucatán Peninsula, is truly a spectacle of nature.

Enchantingly known as the Lagoon of Seven Colours, visitors are treated to myriad shades of blue, crystal clear waters as sunlight reflects off an endless bed of limestone and sparkling white sand.

Yet, unsung to many of those who vacation on its shores each year, the wonder of Bacalar extends far beyond its ocular beauty.

The lagoon, stretching 50km through the Mexican state of Quintana Roo, is also home to the world's highest concentration of stromatolites, coral-like organisms found in only a handful of places around the globe and considered among the earliest lifeforms on earth.

In recent years Bacalar's popularity has soared, catapulting visitor numbers and drawing attention from far and wide. The lagoon has been heralded by some as the 'next Cancun' - a nod to the saturated playground for hotel holidaymakers a few hours up the coast.

But unregulated development, inefficient sewage treatment and hapless waste management are putting the lagoon – and its pre-historic natural treasures – under severe pressure, threatening to destroy the unique ecosystem and transforming Bacalar into, as campaigners say, just another lagoon in Mexico.

Like reefs, stromatolites are extremely delicate formations and major providers of oxygen. They are created by bacteria that gathers together over thousands of years.

Sadly, their existence at Bacalar hangs by a thread as commercial ventures spell ecological disaster in this pristine corner of Central America.

While explosive, the magnified interest in Bacalar, which has doubled the population of the town (also Bacalar) in five years, does not come as a surprise. According to Euromonitor International research, Cancun was the strongest growing city throughout the Americas in 2017.

According to residents, Bacalar – which comes from the Maya ‘Bakhalal’, meaning ‘surrounded by reeds' – was always a sleepy little place. Over the last few years, it has quickly woken up.

Across the region, the Yucatan's rich Maya history and its ruins, its proximity to the second largest coral reef system in the world, and its endless labyrinth of caves and magical sinkholes called cenotés, have boosted its position towards the top of globetrotters' wish-lists in recent years.

Hotels and resorts have multiplied to accommodate the demand, sweeping through towns such as Playa del Carmen and Tulum, and snapping up land in between and beyond.

The surge in tourism has skyrocketed living costs for Mexicans and led to the privatisation of beaches – as well as the shores around Bacalar. Local people are not only struggling to keep up with the price hikes, they're being left with limited access to the nature on their doorstep.

Nationally, the tourism industry in Mexico is outpacing global averages. The country has climbed from being the fifteenth most visited in 2012 to the eighth, with an average growth of 10% each year. In 2017 Mexico welcomed over 40 million visitors, with a good proportion of them bound for Quintana Roo.

With a tourism boom in full swing, the future of Bacalar rests on a knife-edge. There are positives of course – tourism can bring economic benefits for local people and celebrate the marvel of nature. But tourism can also be extremely destructive and cause irreversible damage. Land is being torn apart for development without suitable planning and, in some cases, the omission of conservation from the agenda.

There is a sense of irony that the things attracting people to Bacalar – the colours, serenity and, to an extent, the stromatolites, could be devastated by their arrival.

Local initiative Agua Clara Bacalar, a committee working for the protection of the lagoon, is concerned that time is running out if development projects don't change their focus and put the environment first.

“The stromatolites are extremely fragile, living things that exist here because of the unique composition of the water.  As the water becomes contaminated, the future for the stromatolites becomes ever more precarious. We have reached a tipping point, and, without change, these communities of ancient organisms will soon be gone forever.”

The biggest challenge faced by organisations such as Agua Clara Bacalar is the damage caused by inefficient sewage treatment, with harmful and even toxic bacteria making its way into and polluting the lagoon.

The natural alkalinity, and low levels of dissolved nitrogen and phosphorous in the water, helps the stromatolites to survive, as well as creating the spectacle of colour. If the water consistency changes, the stromatolites and colours go too.

A sprawling landfill on the edge of the town and an absence of recycling are causing further havoc, while unsustainable agricultural practices, including the use of deadly chemicals, constitute another serious threat.

If that wasn't enough, swathes of the mangrove rainforest surrounding the lagoon are being ripped down at an alarming rate, spelling disaster for the wildlife that calls it home.

On the water itself, there are scores of activities to appeal to visitors of different persuasions. On one hand, there are boat tours with ecological themes, but some enterprises play a less responsible role.

One section of the lagoon, known as Pirate Canal, is visited daily by party boats. There are regular instances of swimmers carelessly damaging the stromatolites, while sun creams and boat cleaning chemicals spread more grease and grime.

Still, local committees and residents, as well as scientists and universities, are determined to preserve the lagoon in all its natural glory. There have been campaigns to clear up plastic, documentaries and photography exhibitions about the stromatolites, and clampdowns and fines on businesses that have failed to comply with environmental standards.

For the more conscientious traveller, an ever-growing number of eco-friendly tourism options are also available, with solar power, grey water filtration and composting toilets. Whether their ethical and environmental sensitivity rubs off on the peremptory hotels looking to descend on Bacalar, only time will tell.

A 2015 subterranean study of the lagoon revealed a stark increase of nitrates and phosphates in the water, affirming what scientists and conservationists had feared. Without immediate action and tighter regulation, Bacalar, as we know it, will pass into history.

Dr. Luisa Falcon, of the Institute of Ecology at the Universidad Autónoma de Mexico in Mexico City, has been working on the Laguna Bacalar stromatolites since 2004. She said: “Bacalar is a fragile, tropical lagoon, that has been oligotrophic (an environment with low levels of nutrients) throughout its history. It will not adapt to a sharp increase in organic matter from human activities.

“Already, we've recorded an increase in dissolved nutrients (nitrates and phosphates) in the water, blooms of picocyanobacteria that change the colour of the water from clear blue to green, and areas of injured stromatolites caused by boats and swimmers.

“There's also a slimy material composed of diatoms covering parts of the lagoon floor and growing on the stromatolites.”

Suitable waste and water treatment systems are essential to safeguarding the lagoon's future, while tour operators and visitors have their own roles to play. Further regulations could include limiting tourist activities to certain areas while more extreme proposals include banning boats and swimmers altogether.

Dr Falcon added: “Growth and development are possible, but if the current approach doesn't change, the ecosystem will be devastated by eutrophication (the over-enrichment of water by nutrients which kills fish and grows harmful algae), pollution and a loss of diversity.”

Mexico recently voted Andrés Manuel López Obrador as its new President, in what was dubbed the country's biggest ever election.  López Obrador has promised to transform Mexico by uprooting the violence and corruption that has plagued its recent history.

For conservationists, AMLO, as he widely known, was also the candidate with the best and most dynamic environmental agenda. His programme, NaturAMLO lays out bold ambitions on issues such as water, biodiversity, climate change, sustainable living and environmental justice.

Underlying its objectives, NaturAMLO calls on Mexicans to 'abre mas los ojos' (open your eyes more), which is something that could be well adopted by the less eco-friendly projects at Bacalar.

Of course, politics has a central role to play in the protection of the lagoon, though the onus will be as much on people following regulations, as it is on those drawing them up.

I, like all of those working to protect its future, was bewitched by Bacalar. The crystalline waters, surrounding mangroves and jungle, squawking parrots in the trees and immediate sense of wonder. And that was before I knew what lay beneath the surface.

In determining the future of the lagoon – and its ancient occupants – people have a golden opportunity to put the environment first. To make changes to a place and enable people to enjoy it, while giving unconditional priority to nature. I truly hope that comes to pass.

Harry Shepherd is a writer interested in conservation and sustainability. He has worked for a variety of charities and non-profit organisations and has travelled extensively across Latin America. He tweets at @HarrySheph. Agua Clara Bacalar is a non-profit organisation that promotes sustainable water management and balance between ecosystems and sustainable development. Follow them on Twitter: @AguaClaraQRoo.