Ash to Ash: a new artwork reimagines the history of trees 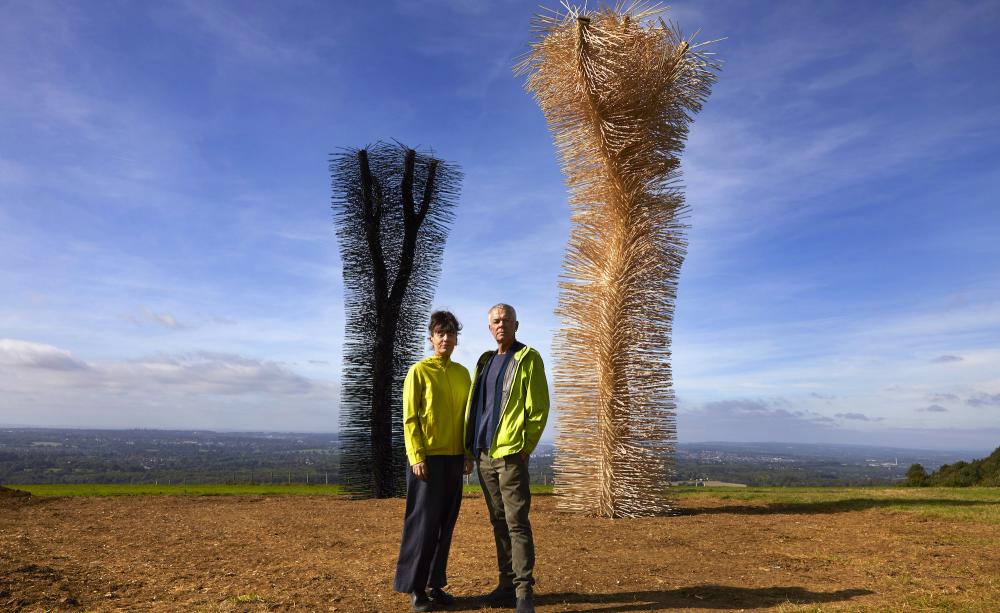 We hope that Ash to Ash becomes part of an urgently needed wake-up call for the preservation of tree life generally and the future of the British landscape.

If you go down to the woods today, you’ll find a pair of ghostly white and charcoal black monoliths rising through the early-morning mist, mournfully reminding us that ash trees are under grave threat.

This hauntingly beautiful tree installation Ash to Ash went on display this month at White Horse Wood, Maidstone, shining a light on the plight of one of our best-loved and most significant species.

The piece has been commissioned by The Ash Project, formed as an urgent cultural response to ash dieback in the Kent Downs and the potential devastation the deadly fungus could have on this Area of Outstanding Natural Beauty.

The charity couldn't have found more fitting artists to take up their cause because, incredibly, the sculpture’s creators, Heather Ackroyd and Dan Harvey, have been researching their latest artwork for a total of more than eighty years.

Ackroyd studied with the pioneering artist David Nash in 1978, just after he had planted his iconic Ash Dome installation, a ring of twenty-two ash trees planted in a secret location in north Wales and intended to stand for centuries.

As a young student at the Royal College of Art in the 1980s, Harvey made arrows and pitched fork sculptures from ash. The duo combined forces in the nineties and the tree has continued to inspire them ever since.

Their in-depth arboreal knowledge makes Ackroyd and Harvey the no-brainer choice to produce an emblematic piece in response to the life and imminent death of one of our most important cornerstone species.

The Ash Project is part of the campaign to highlight the sad prediction that up to 98 percent of Britain’s 150 million mature ash trees may be struck down by dieback disease in the next decade.

Research by Natural England found that 1,058 different species from beetles to birds, lichens to mammals are dependant in some way on ash. All will be affected by the trees' demise.

Ecology is intrinsic to Ackroyd and Harvey's textural work, and has driven them on to produce many award-winning and iconic ‘living’ pieces including the striking ‘History Trees’, a series of ten mature trees holding huge engraved rings at the entrances to the Queen Elizabeth Olympic Park.

The central pillars of their new Ash to Ash sculpture are two ten metre high trees, one stripped of its bark leaving a ghostly pale smooth surface. Its dark twin is blackened by fire. The limbs of both are truncated and carefully pierced by 10,000 arrow shafts.

The artists explained: “The arrow, cleaved from ash, is integral to our artwork, stripped of feather flight and steel head, it is impaled in its thousands into the monolith form of the two trees.”

The effect creates a softened halo around the structures. They continued: “The two forms seem to mirror each other, one casts a dark shadow of loss. Ash to Ash is our way of inviting people to connect emotionally with the landscape, to help them find a way of mourning the loss of this tree and the way that it will change the land forever.”

The Kent Downs is one of Britain’s most densely wooded landscapes, with the ash tree its most common species. Recent drone footage of the leaf-cloaked hills is shocking, revealing the skeletons of thousands of dead ash hidden deep within the forests, making the county the hardest hit by dieback disease, at least so far.

As a result, the Kent Downs Area of Outstanding Natural Beauty is collaborating with more than twenty national and local partners via The Ash Project to develop a wide-ranging programme of walks, talks and workshops along with a Kent-wide plan for landscape restoration.

Part of the project is The Ash Archive, an exhibition currently touring Kent that celebrates the human relationship with ash trees and the woodland environment.

Works by artists and designers include Ackroyd and Harvey, Colin Booth, Adam Chodzko, Sebastian Cox, French and Mottershead, Magz Hall, Sheaf + Barley and David Nash (in collaboration with Common Ground) and a collection of objects made of ash wood for Rob Penn’s book The Man Who Made Things Out of Trees.

Ackroyd and Harvey drew inspiration from Penn's work. His book tracks his search for a veteran ash tree growing in a forest near to his Welsh hillside home, that he then felled and made into more than 40 objects.

From hurley sticks to sledges, Penn captures the essence of the tree and its remarkable history through the art of craftsmanship.

Ackroyd explained: “Rob’s generous support to shape our understanding of how the ash tree in its myriad of wooden forms has manifested itself in so many objects and weaved itself through so many place names that its presence, and now inevitable absence, in our landscape is something we can never take for granted.”

Ash has played a significant role in many cultures for millennia, including our's. The sap (manna) was fed to newborn babies as their first food to protect them.

Ash has also featured in Chinese medicine for thousands of years, as well as being used to make everything from cart wheels through to Routemaster buses. It has many mythical properties, too: snakes were said to go through fire to avoid ash leaves.

Today research has shown ash to have positive effects in the treatment of Alzheimer’s, Parkinson’s and HIV.

Part of the artists' investigations uncovered a huge industry in arrow production between 1300-1500. Defeats of medieval armies by arrow-storms where English archers could unleash twelve arrows per minute intrigued the duo. The arrow is light enough to shoot a good distance, yet heavy enough to maintain its high, initial velocity and cause damage when striking the target.

Harvey concluded: “We hope that Ash to Ash becomes part of an urgently needed wake-up call for the preservation of tree life generally and the future of the British landscape."

This is a distinct challenge given the pervasiveness of the fungal infection Hymenoscyphus fraxineus, which is affecting millions of ash trees across the country. As well as mature specimens, vulnerable seedlings also easily succumb to the infection.

The disease is no respecter of art either as it spreads through the UK. Even Ackroyd's early inspiration, the wonderful Ash Dome planted and conceived by Nash and intended to outlive the Royal Academician, has now been struck with the fungus.

The Forestry Commission has embarked on research to identify the genetic factors that allow some ash trees to tolerate or resist infection, with a long-term view to breeding new disease-resistant ash trees for the future.

In the meantime, if you go down to the woods at Maidstone, you’ll be sure of a big, very artistic, surprise.

Gary Cook is an environmental painter who was the senior artist for The Sunday Times for twenty six years. He exhibits regularly in the south west and London including with the Society of Graphic Fine Art and at the Royal Institute of Painters in Water Colour. Gary tweets from @cookthepainter.

The Ash Archive exhibition is on show from 11 to 20 October at the Sevenoaks Kaleidoscope Gallery, Sevenoaks TN13 1HW