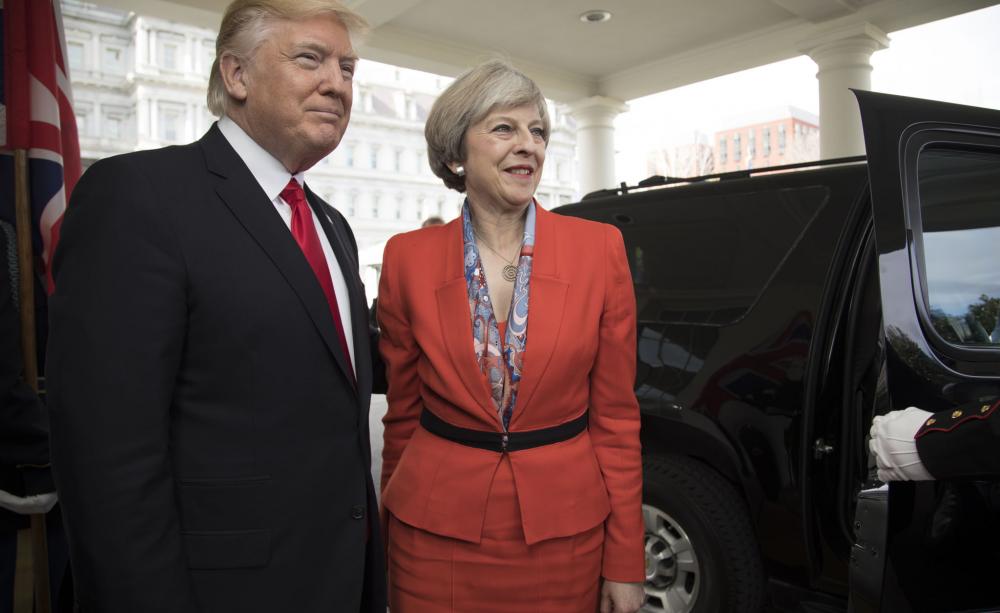 Wikimedia
Brexit talks have stalled because Theresa May won’t abandon a toxic trade deal with Trump.

Theresa May hopes to get Brexit talks moving again this week, but faces an uphill struggle.

There’s little sign that the deadlock will be broken, even though many of us outside Westminster may be sick to the back teeth of backstops and pulling our hair out over Brexit extensions. It’s reasonable to ask: why?

This week Jeremy Corbyn gave his take on what, precisely, this is all about. In his words: “The government doesn’t appear to be shifting the red lines because they’ve got a big pressure in the Tory party that actually wants to turn this country into a deregulated, low-tax society which will do a deal with Trump.”

For all the Brexit micro-positioning, Corbyn's point deserves to be taken seriously.

The hard-Brexit wing of the Conservative party have long seen "taking back control" as meaning nothing less than taking away hard-won protections such as the NHS and food safety standards, in order to grant even more control to big business.

Hard-Brexiters have also always been clear on the crowning glory of this frenzy of deregulation: a trade deal with Donald Trump.

Take trade secretary Liam Fox, whose hopes for a US-UK trade deal are at the heart of his long-term support for Brexit. Fox is so set on trading with Trump that the Trade Bill he is attempting to force through Parliament fails to give MPs any meaningful vote over future trade agreements.

Fox knows full well that a toxic trade deal with Trump would be nigh on impossible to force through Parliament. So his Trade Bill (which we’re fighting hard to reform) dodges this bullet by shifting power over future trade agreements to ministers, in effect writing himself a blank cheque to negotiate any deal he likes. Parliamentary sovereignty anyone?

Why, then, are Brexiteers like Fox so set on trading with Trump?

Former Conservative chancellor Nigel Lawson gave us a clue when, back in 2016, he declared that, free from the shackles of EU regulation, we could “finish the job that Margaret Thatcher started.”

No matter that de-industrialised and divided Brexit Britain is nothing other than a testimony to the failures of the Thatcherite project, Fox and his ilk remain committed to extreme free-market ideology and the powerful interests this serves.

While the role of the market within contemporary Britain is already less “invisible hand” and more clunking great boot, these economic extremists simply will not rest until our schools and health services have been completely privatised.

Until fossil fuel companies are free to extract and burn whatever they like. Until supermarkets are stacked with products farmed as intensively and toxically as big agribusiness want.

Until our rights at work are diminished to the extent that employers offering poverty pay demand. Until the NHS is stripped of any power to negotiate on the prices it pays to big pharma.

Or, in other words, until our economic policy is as dominated by uncontrolled commercial interests as it is in the US.

This, after all, is what a US-UK trade deal would really be about: undoing the regulation that, for decades, has restricted the abilities of US multinationals to enforce their business models on our shores.

Don’t believe it? Just have a read of the US negotiating objectives for the deal, which include “reduce or eliminate barriers to US investment in all sectors in the UK” and “increase opportunities for US firms to sell US products and services to the UK”.

US agriculture firms, for instance, have long been frustrated by EU standards that kept their highly processed and chemically treated products off our shelves - products like chlorine-washed chicken andhormone-injected beef.

The British public do not want to touch this kind of produce, and for good reason. The risks for public health and our environment are far-reaching, from the failure of chlorine-washing to kill listeria and salmonella, through to compounding the crisis of antibiotic resistance through their usage on livestock.

Chlorinated chicken, though, is just the tip of the iceberg.

Because under a US-UK trade deal, if US food imports start to make us ill, our healthcare system will be less equipped to make us better.

American healthcare firms are eyeing up our NHS as a new source of profitable investment. US senators have already said they hope a future US-UK deal could open up the NHS – asked about a potential US-UK deal, Republican senator Todd Young said he was: “Always looking for opportunities to open up foreign markets”.

There is no question that this is an “America first” deal. The US’s negotiating objectives leave no doubt on this. Neither do the suite of US lobbyists invited to submit their priorities for the deal. And nor, of course, does Trump himself.

Giddy on his disquieting dream of Empire 2.0, Liam Fox has an inflated sense of the UK’s power in all this. The reality, though, is that Britain’s standing on the international stage has rarely been more shambolic. The US, meanwhile, boasts the most experience negotiating team in the world.

With Brexit negotiations stalling, we’re being held to ransom by a cabal of market fundamentalists hell-bent on taking control away from ordinary people and handing this over to US-based multinationals.

Just as with Trump’s election in the US, Brexit shows what happens when toxic racism and anti-immigrant hysteria become intertwined with a toxic economic agenda designed to consolidate the wealth and power of the 1 percent against the 99 percent.

These are deeply disturbing times. But, just a few years ago, people power stopped the US-UK trade deal’s predecessor, TTIP, in its tracks.

If, together, we raise our voices loud enough once again, we can make sure that the hard-Brexit fantasy of trading with Trump remains just this: a fantasy.