The Race is On - a new film 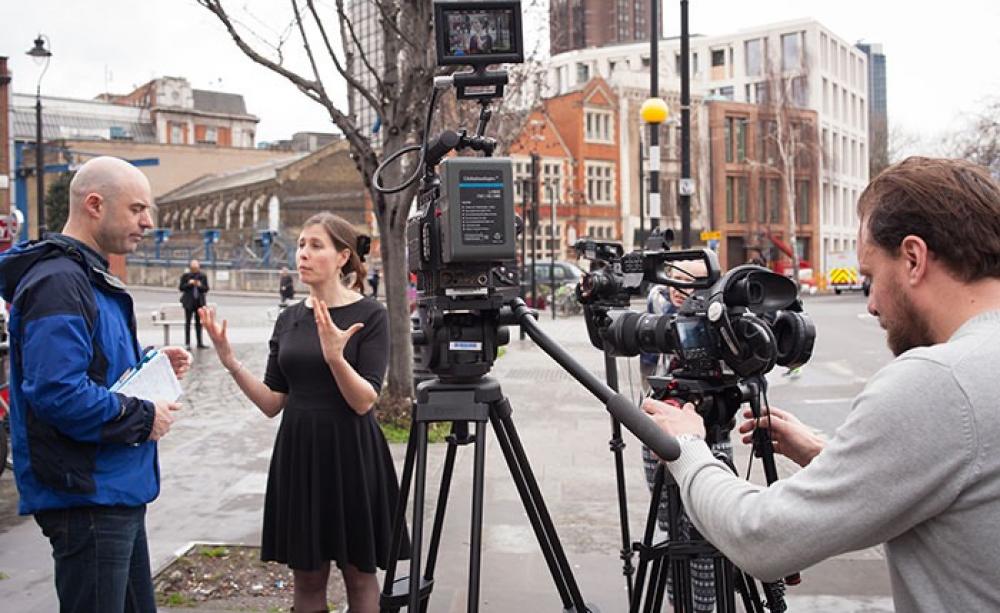 Suddenly climate change is on the front page of newspapers and leading news bulletins. What happened?

Millions of people tuned into BBC One to watch Climate Change: The Facts last week - an hour-long programme presented by David Attenborough that starkly laid out the central dangers that lurk in our near-future.

The next day, hundreds of thousands of school children continued to strike for climate as part of the global Fridays4Future movement. Saturday saw more cat and mouse played between the Metropolitan Police force and Extinction Rebellion activists on Waterloo Bridge, Parliament Square, and Marble Arch.

On Sunday, London welcomed Greta Thunberg who has become an international leader of climate justice within a matter of months. On Monday she met with MPs and on Tuesday received a round of applause from the House of Commons.

Journalists must be relieved to be free of the immediate pressures of Brexit with the latest deadline kicked down the road to October. But that does not explain the rise of movements and a palpable shift in public opinion.

Is this the fabled tipping point in society which will lead to the rapid phase out of fossil fuels?

If it is, then interest needs to be translated into actions. The risk is that today’s concern about climate change becomes yesterdays well-meaning fad. Even if there is a sudden shift in political and industrial direction, it will take years of sustained efforts to ensure that we and more importantly our children and future generations are spared from the worst ravages of climate breakdown.

This was my main concern when I began talking to filmmaker Paul Maple of Global Documentary three years ago.

He and I were increasingly frustrated at the almost complete absence of climate change on our screens. And when climate change did break through, it was always as the result of freak weather.

I’ve talked about climate change on the Jeremy Vine show and BBC News, but in both instances the hook was severe wild fires in which climate change was mentioned but was not the main event.

So presumably I’m very pleased to see Climate Change: The Facts primetime on BBC One. Yes, but.

The but is that while science took centre stage with wonderful contributions from many of the leading scientists, the proposed ways out of dangerous climate change presented in the final quarter of an hour was something of a let down.

While I understand the need to focus on the potential of new technologies, electric aircraft have nothing really to contribute.

But more fundamentally, the programme completely failed to explain just how radical the transformation to sustainability is going to be. The show quite bravely called-out the fossil fuel industry in their public denial of climate change while their own scientists were telling them the risks in private, but it completely avoided the elephant in the room - the dogma of growth.

Paul and I were both convinced that any effective documentary about climate change must discuss economic growth.

Our current political paradigm is one in which every policy is judged on the basis of whether it will grow the economy as measured in Gross Domestic Product.

It’s not as if there are individuals and groups that don’t push back on the primacy of economic growth. It’s just we never see them on the BBC or other mainstream TV channels.

The end result has been The Race is On: Secrets and Solutions of Climate Change, a 39-minute documentary we made about climate change and what we in the UK and around the world can do to address it.

I talk to leading climate scientists who explain how humans are affecting the Earth’s climate. And yes, I talk to pioneers in solar and wind who are steadily transforming the UK’s electricity generating sector.

But I also talk to the community activists and pioneers in new economic thinking that gets to the heart of the matter - how can we turn around infrastructure, policies and most important mind-sets about climate change?

Our film has been something of a labour of love driven by a desire to see the real issues about climate change presented in a way that will have mass appeal and generate real impact.

We were fortunate to collaborate with a wide range of dedicated and inspirational contributors and fantastic researchers.

Much of this work has been channelled into an accompanying website for the film in which specific actions are laid out that anyone can take.

We will be touring the film across the UK. A typical format is a screening of the film in a community centre with a panel discussion or other forum for people to talk about how they can get engaged in climate change solutions. If you would like to book us then please get in touch. The film is released under Creative Commons and there are no charges for viewings. That said, tea and biscuits would be nice.

In the meantime please visit climateracefilm.org, view the film, like, share, and help us spread the word about both the secrets and solutions of climate change.

Dr James Dyke is director of the Global Sustainability Solutions MSc at the Global Systems Institute at the University of Exeter, and presenter of The Race is On: Secrets and Solutions of Climate Change. He tweets at @JamesGDyke.