Oil and gas grab in the Ionian Sea 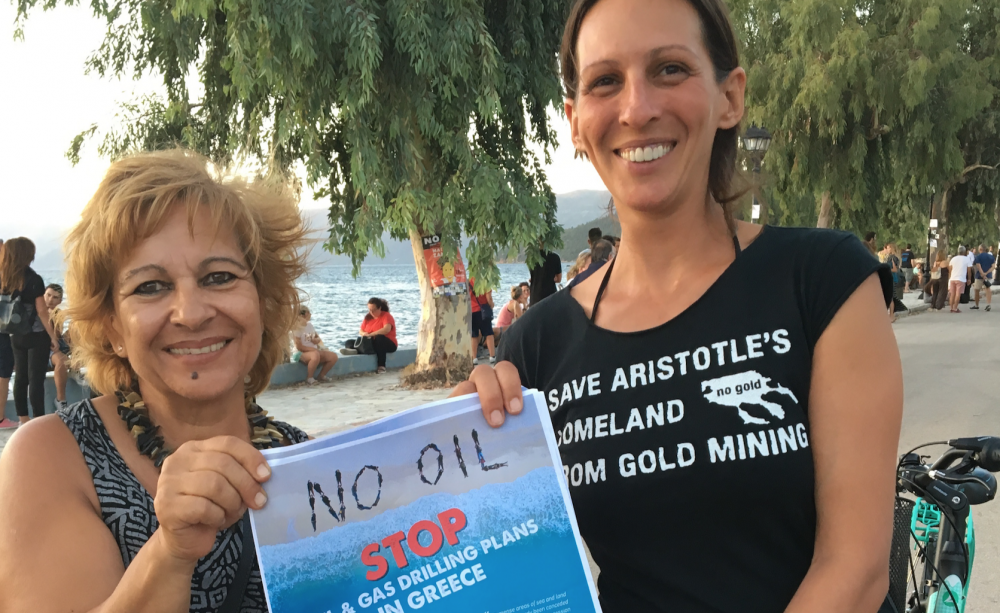 ©David Greenhalgh
Opposition mounts against a new dash for hydrocarbon prospecting in the Eastern Mediterranean.

The newly elected conservative government in Greece has announced its intention to fast track the licensing process for hydrocarbon prospecting in an ecologically vulnerable area of the Mediterranean. The government will immediately introduce four previously signed contracts for ratification in parliament.

On and offshore concessions run from Corfu to Crete west of mainland Greece. They are seen as a panacea for Greek economic woes. Ceded blocks cross or are adjacent to important Natura 2000 conservation sites: these include the National Marine Park of Zyknathosthe National Park of Kotychi-Strofilia, the Messolongi lagoons (Ramsar site and national park), the Amvrakikos lagoons (Ramsar site and national park), and the marine area of Kyparissia. High value conservation habitats include Posidonia oceanica (seagrass) meadows, coastal lagoons, and rocky reefs with coralligenous formations.

The 600 kilometer long Hellenic Trench is a designated Important Marine Mammal Area (IMMA) that runs along the Ionian Sea to wrap around the island of Crete in the south. It is the deepest part of the Mediterranean reaching up to 5,200 meters. This is home to several vulnerable protected species and deep diving marine mammals: rare Mediterranean Monk seal, Striped dolphin, the Common dolphin, the Sperm whale, the Cuvier’s beaked whale, Fin whale, the loggerhead sea turtle, and the Noble pen shell.

Most of these animals are extremely sensitive to sound. Seismic airgun blasting is already killing marine life: in January this year an unprecedented number of loggerhead turtles were washed up at the same time on Israel’s coast. Initial findings from leading scientists in the field indicate seismic tests are responsible.

Mediterranean Sperm whales are genetically unique. The isolated subpopulation of the Hellenic Trench numbers some 60 individuals and is the largest concentration in the Eastern Mediterranean. They are severely impacted by one of the busiest shipping lanes in the world: carcasses are regularly washed up, either sliced up by propellers, poisoned by plastics or drowned by illegal monofilament driftnets. Further stress, initially from seismic testing but later from disorienting drilling, could see the numbers of this endangered population fall below a level where it can guarantee its survival.

But opposition to hydrocarbon concessions amongst Ionian Islanders is mounting as awareness of the impacts on its economy and ecology spread.

A ‘No Oil’ concert held by the Kefalonia-Ithaca Open Assembly against Hydrocarbon Extraction organised a ‘No Oil’ concert attracted thousands in the popular tourist port of Sami on a balmy evening at the end of July. The town is close to the glorious beach of Antisamos filmed in Captain Corelli’s Mandolin and numbers of supportive visitors were attracted to the event. Tourists in this hauntingly beautiful coast temporarily stepped aside from their roles to acknowledge the pandemic nature of a planet in crisis.

The event was coordinated with the arrival of the WWF’s research ship, the Blue Panda, linking opposition across the islands and playing a key educational role.

Dimitris Ibrahim, head of the WWF Greece campaign against hydrocarbons explains that the vast majority of islanders oppose oil drilling. It encourages visitors and sets up information stands wherever it docks. It provides a place to meet local tourist boards, government and other administrative representatives and offers live aboard opportunities for journalists and researchers.

An economic impact study commissioned by WWF and produced by the UK environment consultancy EFTEC shows that there are potentially disastrous consequences of a major oil spill and high economic costs for the more likely minor spills. 75% of theIonian Islands’ economies are dependent on tourism and an accident could incur losses to the area of €6 billion.

Ibrahim said: "Drilling at these depths and barometric pressures and in an earthquake prone zone is extremely risk.". The Deepwater Horizon spill in the Gulf of Mexico of 2010 resulted from drilling at a depth of 1500meters. "These are not just deep waters; these are ultra deep waters," Ibrahim stresses. "If there is an oil spill it is impossible to predict where in the extensive Mediterranean coastline a spill will end up".

The policy began with the Conservative led coalition in 2011 to 12. The Syriza government under Alexis Tsipras vigorously pursued the lease of hydrocarbon concessions as a quick fix to the debt ridden Greek economy. Only a 5 percent return of company profits is expected for local economies but no income will be realized until as late as 2030; nothing is guaranteed and Islanders expect little economic return.

Companies and consortia including Total, Exxonmobil, Hellenic Petroleum and Energean have rushed to the Ionian Sea because of the easy entry. It is ironic that one of the first was Repsol, the Spanish oil company which faced widespread opposition to its controversial planned exploration in in The Canaries and Balaeric Islands and now faces a permanent ban in that area.

The Greek Government has bypassed Environmental Impact Assessment procedures obliged by The Offshore Protocol of Barcelona Convention Ibrahim explains: "They have legislated for an entirely new mechanism: Environmental Action Plans, which we have never seen before. This is a private document compiled by the hydrocarbon company, authored by the company and controlled by the company. What the government does according to the legislation is accepts it; not approves, not rejects, but accepts whatever the companies publish".

Just two days before the July 7th general election in Greece this year, Alexis Tsipras signed off two further key concessions in the Crete region. This was likely motivated by Turkish ships exploratory drilling off the coast of Cyprus. Conflict over rights to the newly discovered gas fields is raising international concern.

WWF, Greenpeace and the Pelagos Cetacean Research Institute are together contesting in the Greek Council of State the hasty release of these concessions and is claiming key evidence submitted by environmental groups was overlooked. Ibrahim said: "It could be a game changer. The rush to carbon extraction is an ill-conceived strategy for Greece. The world is transitioning from fossil fuels. Greece has almost double the sunlight of the UK, but there has been zero growth in solar energy use in the last five years".

However, under the new government led by the banking technocrat Kyriakos Mitsotakis on 6 August 6 in Athens, energy ministers from Greece, Israel and Cyprus, along with US Assistant Secretary of State for Energy Resources (former leading oil lobbyist) Francis Fannon cemented a new regional alliance. A miniscule reserve of of 10.9 million barrels in Katakolo could begin production next year while a more significant 150 million barrel block off the islands of Kefalonia and Ithaca are ready for feasibility drilling to see if the oil is recoverable.

The grip of big oil money is tightening.

David Greenhalgh is a construction consultant and an environmental campaigner who has worked for organisations including the Pacific Asia Resource Center and the World Conference Against A & H Bombs.