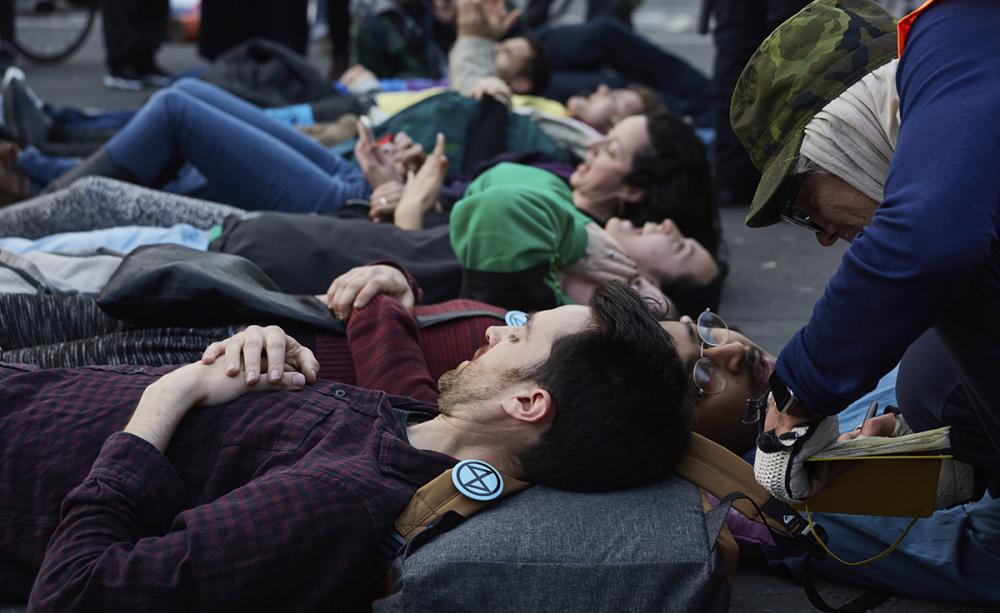 Seven things that every organisation should do to combat climate crisis.

The climate dragon is awake. Billions of tonnes of meltwater are pouring off the Greenland ice sheet just as Trump flippantly makes predatory real estate threats to acquire the country.

Much of Europe baked in record high temperatures last month, leaving people to adopt new ways of coping with the heat. Funerals have been held for dead glaciers. Climate migrants gather at borders. As Extinction Rebellion’s book puts it: This is not a drill.

We need to spell out what to do next, beyond the greenwash and virtue-signalling. As much as I'm not a huge fan of online listicles, here we are: the seven things that every organisation should be doing.

Declare climate emergency. Host a C-suite presentation and discussion on the reality of the crisis and do what hundreds of organisations have done – from local Councils, through global cities like London, and the UK as a nation – formally declare a climate emergency. You will be in good company joining almost 1000 institutions, in 18 countries, governing over 200 million people. The Amazon and the Arctic are on fire and Greenland is melting like it’s 2070 - what are you waiting for? Does this feel ‘emergency’ enough for you yet?

Carbon Zero is the goal. The most recent IPCC report states that we need a 40 percent minimum cut in carbon by 2030, with net zero following soon after. Measure your carbon footprint. Buy renewable energy (what? You mean you haven’t already done this?). Sign up to deliver science based targets (600+ companies already committed). What would your organisation have to look like, how might the goods and services you provide have to change, in a zero carbon world? Use this insight as your north star. Blazing the trail here is Orsted which is going from being a ‘black’ fossil fuel business to a ‘green’ renewable energy company in less than ten years, and will be 99 percent green energy by 2025.

Employees’ Assembly. Deliberative democratic Citizens' Assemblies are now being planned around the world wrestling with the big complex challenges, compromises, risks and opportunities that the climate change crisis demands of us. Every organisation should convene an Employees’ Assembly on climate change, initiated and hosted by the CEO, that would use collective intelligence from within and demographic representation from across the organisation to wrangle what their zero carbon future needs to look like. and to create credible ideas, options and plans for realising that future. These will be our roadmaps for transformation. To change everything we need everyone.

Embrace activism. I’m not saying that every employee should sign up to Extinction Rebellion, but why not? Ethical tree-planting search engine Ecosia is as close as we have got to a ‘regenerative’ digital business that has already planted over 65M trees. This week the company announced that it would encourage climate activism, non violent direct action and civil disobedience amongst its employees, and provide legal support if they were arrested. Even going so far as to count prison time as work time. Join the Global Climate Strike next month. Stand shoulder to shoulder with your children.

Enable action. Let’s actively incentivise employees to do the right thing and adopt low carbon behaviours at home and at work. The list of measures here is endless from bike to work schemes, electric company cars, meatless canteen days and event catering, incentives for virtual meetings, and no-fly work travel (maybe start with ‘One in Five’ flights and then transition to zero?). Even low travel holiday incentives like Climate Perks - which is based on a policy I wrote at my old agency following my circumnavigation of the globe without flying - are becoming popular. Divest the company pension fund from fossil fuels. Be creative. But link all these initiatives together under a visible, credible and coherent plan so the whole is greater than the sum of the parts. Be clear and unambiguous – we tackle this together, at home and at work.

Play with others. In the same way that every organisation will have to transform its products and services in the teeth of the climate emergency and engage and inspire it’s employees to take action at home and at work, we also need radical collaboration on climate change between organisations. We have to reimagine and re-engineer low carbon homes and place-making, food systems and transport. Coherence and effectiveness will depend on new partnerships, unlikely bedfellows and even competitors working together in new Alliances for Climate Action. Find one, join one or even start one.

Pause and reflect. We got into this mess through the belief that incremental change would deliver us through this rapid transition. That is clearly no longer the case. The climate challenge is uniquely interconnected, existential and increasingly exponential. But rather than rush into ‘solutionising’ in the traditional overworked, unreflective, burnt-out fashion we have done for the last twenty years, we need to emotionally and intellectually absorb the severity of the scientific reality. Read up on Deep Adaptation. Take the time to digest. Or as Rumi puts it: “Sit, be still, and listen, because you're drunk and we're at the edge of the roof”.

Only once you truly open your eyes to the stirring climate dragon can you overcome the wilful blindness that has characterised much of our response to date.

This is an intergenerational challenge that starts in earnest right now. Every month matters, every quarter counts. How bad this gets in the future depends entirely on the courage, creativity and commitment of our actions today. No more excuses.

Every organisation can do the seven things outlined above. Beginning today.

As the plaque left at the site of the now melted Ok glacier in Iceland this month reads: "This monument is to acknowledge that we know what is happening and what needs to be done. Only you know if we did it".