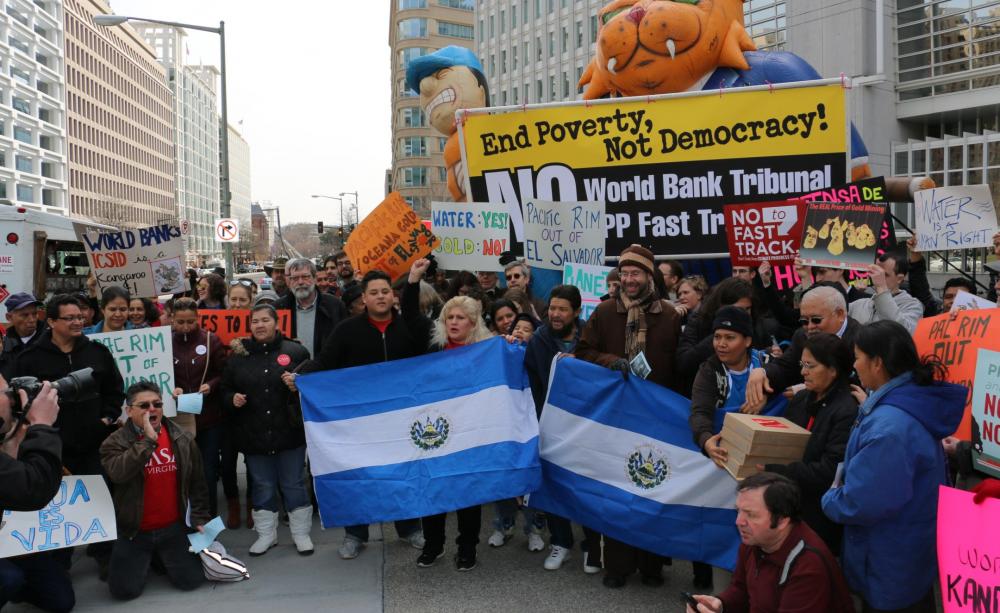 Institute for policy Studies
International corporations are decimating nature, destroying lives and manipulating opinion. Here's how to stop them..

A US engineering giant sneaks into a Bolivian city under an assumed name and takes over its public water system.  A Canadian mining company seeks control of El Salvador’s gold even at the cost of poisoning its drinking water.  An Italian energy conglomerate floods an entire valley in Colombia, decimating the lives and land of thousands with a massive hydroelectric project.

The race is on for the wealth under foot in Latin America - from silver in Peru, to oil and gas in Ecuador, to lithium in Bolivia - and giant international corporations stand at the forefront.

It is not a simple thing for a global corporation to set up shop in a country on the other side of the world and wrestle away control over its natural resources.  But by looking at case after case across an entire region, the Democracy Center has identified a clear pattern of corporate strategies, three of which are fundamental.

The ENEL Corporation is building a massive hydroelectric project in Colombia that will ultimately decimate 82 square kilometers of farmland settled by small farmers.

In a statement ENEL claimed: "Human and indigenous rights are intrinsic to our operating principles and corporate codes. We want to improve the quality of life for people in the areas in which we work by promoting education, employment and social inclusion."

If you read the proclamations of the corporations involved in the scramble for Latin America’s natural resources you could easily mistake them for the declarations of a UN agency or development NGO.  They cast themselves as benevolent actors whose true purpose is to lift up the lives of the local people – to give them affordable energy, ample water, new economic opportunity, and a better future.  The conquistadors felt no need for such niceties.

Multinational corporations have to simultaneously manage their image with the people and governments in the country where they have landed and also with the wider public audience in their home country.  A well-crafted corporate public relations message is essential to them on both fronts, but the lofty promises they make and the reality on the ground are two radically different things.

ENEL, the Italian energy giant, set its sights on the Magdalena River in Colombia and a massive hydroelectric development.  The company’s pitch was about getting people affordable electricity.  Left out was the key fact that the energy to be generated had little to do with generating electricity for the Colombian people and everything to do with generating energy for the lucrative export market, at huge environmental cost.

Miller Dussán Calderón, a local community leader in the fight against ENEL’s project (and who was later criminally prosecuted for that opposition), described the reality of the project this way: “[Enel] has invaded our territories and they are now destroying our strategic ecosystems, our food security, kicking communities out of their own territories.”

In theory, the people of a nation have a natural defense mechanism to look after their interests – democracy and the protective powers of government.  A foreign corporation can’t simply wander into a country and start drilling, mining, fracking or damming.  It needs a complicated set of permissions from the government, with the President, the legislative branch, regulatory bodies, the courts, and even community-based consultations playing a role.  That is the theory, but again the reality is something very different.

Corporations entering a nation go to great lengths to influence the laws, rules and regulations governing environmental protection.  Some activists refer to this as: “Why break the law when you can make the law.”

In Peru, Glencore Xstrata, a massive Swiss-owned multi-national has been on a mining hunt for copper, iron ore and other minerals for more than a decade.  Modern mining operations require water in large quantities and one common result is its contamination with chemicals such as arsenic, thallium, and lead. This was the case in the Andean province of Espinar, where mining water is drawn from and then returned to the local river.

Glencore helped drive a direct lobbying campaign to be sure environmental regulations would not get in the way of its ambitions.  It also mounted that campaign behind the mask of a local industry association that launched an intense national media campaign aimed at policy makers.

The campaign warning that the nation’s economy was "slowing down" as a consequence of excessive regulation, including the rules aimed at the environmental consequences of Glencore’s mining operations.  Similar efforts to relax and undercut environmental regulation can be found across the region.

But the reach of ‘corporate capture’ goes well beyond the quiet offices where environmental approvals are granted.

These corporations aren’t foolish.  They know that public anger against them quickly turns to protest and when the battle lines move from offices to the streets the companies want to guarantee that the police will be on their side.

During the Cochabamba Water Revolt the national government issued a declaration of martial law and sent soldiers and police into the streets to violently repress the protests.  In Peru police signed a series of agreements with more than a dozen corporations to provide them with paid private security, including Glencore.

The result is the criminalization of dissent and the kind of violence that has made being an environmental defender in Latin America one of the most dangerous acts on Earth.

After the US corporate giant Bechtel was kicked out of Bolivia in the Water Revolt, it retaliated by filing a $50 million demand against the people of Bolivia at the International Centre for the Settlement of Investment Disputes (ICSID), the World Bank’s international trade court.

When Pacific Rim, a Canadian mining firm, was denied the permits it needed to continue its gold mining operations in El Salvador (a denial that was also the product of public protest) it turned to ICSID seeking $250 million in damages.

In these cases corporations are entitled to seek not only the return of the actual funds they’ve invested, but the profits they had hoped to make and were denied as a result of a nation’s choice.  Bechtel’s Bolivia subsidiary, for example, invested only $1 million in Cochabamba, but sought payment of $50 million, claiming lost profits.

These cases are so profitable that some of the litigating corporations have even turned the cases themselves into a lucrative market, selling stakes to investors who then get a share of the settlement.

For the companies involved in these cases the system is a double-win proposition.  Just the threat of such a case, which can cost a poor nation a huge fortune, is enough to have a chilling effect on changes in policy not to the companies’ liking.  And if they win, they reap a fortune.

This growing power of global corporations in Latin America is not going unchallenged by the communities affected nor by the international activists and organizations who join them in solidarity.

Brave and powerful activist campaigns have been waged across the region and globally, in defense of natural resources and territory and against the rise of corporate control.

At a local level that begins with mobilizing together.  A city in Bolivia is shut down three times by popular general strikes.  A community in El Salvador presses its right to clean water even after some among them are killed for their resistance.  Indigenous groups in Ecuador join together to demand accountability for the destruction of their lands.

Together with global allies, these communities also challenge the corporation’s misleading narrative with a real one.  In the fight against fracking in Colombia local activists tapped into the power of anti-fracking efforts in other countries.

Carlos Andrés Santiago, a local man who challenged ConocoPhillips fracking efforts there declared at a community consultation, “If fracking is so great, then how come in Australia five out of seven states have banned it?  Why is it that a month ago in Ireland the President signed into law the banning of fracking?”

Activists are also taking their battles directly to the top leaders of the corporations involved, in very personal ways.  The heads of a major corporation can decide to destroy an entire Andean valley and never meet a soul who lives there.

It is important to fix the story of that abuse squarely onto the top leaders of the corporation involved.  In the Bechtel case the Democracy Center gave 2,000 activists the personal email of the corporation’s CEO, Riley Bechtel.

When ENEL was pushing criminal prosecution of opponents of its mega-hydro project, a coalition of allies went after the company’s CEO on his Twitter feed.  In both cases that activism forced the companies to capitulate because the damage done to these CEO reputations became a greater burden than they were willing to bear.

Finally, global solidarity is essential.  When a community in a place like El Salvador or Peru is under threat from a multinational corporation it is often fighting a battle that it cannot win alone and shouldn’t have to.

Local communities need information about the corporate actors they are dealing with and they need allies who can call out corporations on their home turf.

The best way to challenge the manipulative ways of global corporate power is first to know them.  If we do, with clear eyes and together in community and solidarity, we can be sure that the urgency and bravery that drives these struggles is made as effective as it can possibly be.