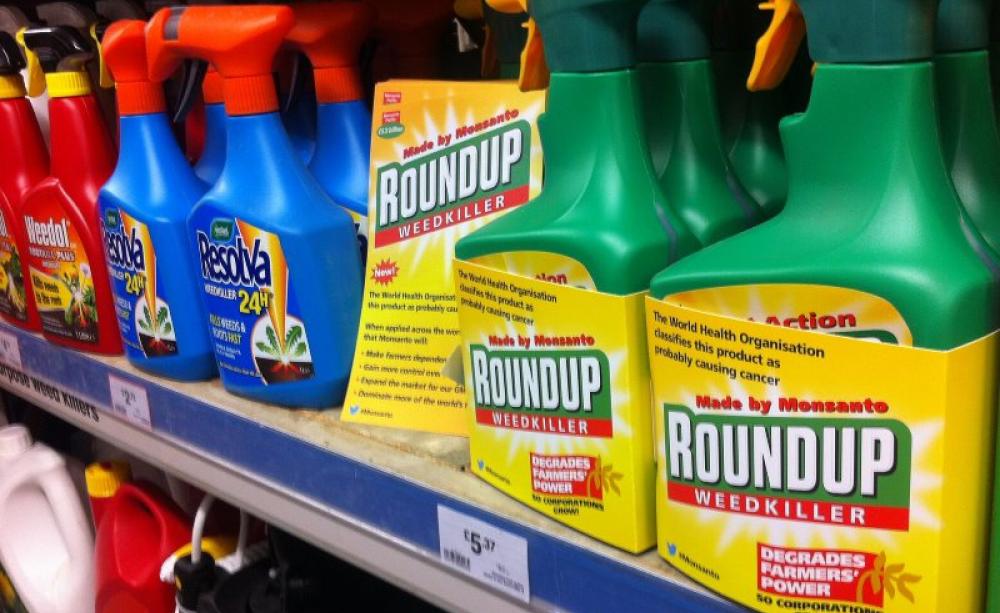 Glyphosate is a weed-killing chemical that was developed by corporate giant Monsanto in the early 1970s. It's an active ingredient in the herbicide Roundup and helps to eliminate unwanted plants and grasses from farms, public parks, school campuses, and other large green spaces.

Roundup is the most popular herbicide in the United States. Roundup products are used in more than 160 countries, with an estimated 1.4 billion pounds of the herbicide used every year.

Despite its widespread use, the brand has raised concerns among consumers. Allegations against the herbicide include its potential to damage the environment and human health. Recent court cases have even found that glyphosate is the cause of several cancers, including non-Hodgkin’s lymphoma, B-cell lymphoma, and leukemia.

Glyphosate has been the center of debate since it was deemed a “probable human carcinogen” by the International Agency for Research on Cancer (IARC) in 2015.

Following this statement, thousands of consumers came forward claiming that their cancer diagnoses were caused by years of Roundup use. Many of these lawsuits claim that Monsanto, which was acquired by Bayer AG in 2018, failed to properly warn Roundup customers of the potential dangers of its effect on human health.

Dwayne Johnson, a groundskeeper for a California county school district, was initially awarded $289 million in damages by a San Francisco jury in August 2018 after arguing that his cancer was caused by several years of exposure to Roundup. Though the award was later reduced to $78.5 million, Johnson’s case was a substantial win against Monsanto.

Johnson’s case initiated a snowball effect of consumer lawsuits against the agrochemical corporation. Edwin Hardeman, who used Roundup since the 1980s, was awarded $80 million after a unanimous jury found that the herbicide contributed to his cancer. Alva and Alberta Pilliod, who also used Roundup for years to treat their yard and other owned properties, were granted $2 billion in damages after they went to trial in March 2019.

More than 13,400 cancer patients have filed lawsuits against Monsanto because of the growing concerns that there is a potential correlation between the use of glyphosate and different forms of cancer.

Though Roundup is commonly used to maintain lawns, gardens, and other public spaces, the herbicide is widely used in the agricultural space due to its ability to kill weeds that harm crops.

In 1996, Monsanto introduced Roundup Ready crops, or seeds for genetically modified organisms (GMO) that are resistant to glyphosate. This new capability allowed farmers to spray Roundup everywhere without worrying about damaging their crops.

Though agricultural spraying may help control weed growth, it also has the potential to affect workers, livestock, and nearby ecosystems. Glyphosate, in addition to the other chemicals in Roundup, can become airborne during agricultural spraying. This may lead to inhalation by nearby humans and animals and even ingestion by livestock who eat chemically-treated feed.

A German study found that glyphosate residue has the potential to reach animals through feed, and that the presence of glyphosate within the animal tissue was, “alarming at even low concentrations.”

In aquatic environments, researchers have also discovered links between glyphosate exposure and changes in the metabolism, growth, behavior, and reproduction of certain wildlife creatures.

There are many ways consumers are exposed to Roundup on a daily basis, from ingesting food treated with glyphosate, to visiting a local park where glyphosate was sprayed, to handling the product itself.

However, there are still ways for consumers to protect themselves and the environment from the risks of exposure. One method is to create organic, all-natural pesticides to get rid of pesky bugs around the house or weeds in the garden. Though this method does offer an alternative to store-bought herbicides for at-home use, citizens are still at risk of glyphosate exposure virtually everywhere they go.

In wake of the recent Roundup lawsuits, community legislators from around the world have come forward to mitigate and even prohibit Roundup use in parks, fields, and other public places, attesting that the herbicide is a danger to community members as well as the environment.

New York City council members recently introduced legislation that would restrict Roundup and other glyphosate-based products from public parks and other properties. These weed killers would also not be allowed to be used within 75 feet of any body of water.

University of California President Janet Napolitano has also taken a stand to suspend glyphosate-based herbicides from use at the UC campuses, leading up to a permanent glyphosate ban.

Glyphosate and Roundup restrictions are not uncommon. Countries that have restricted or completely banned include Vietnam, the Czech Republic, and Italy.

Though there are measures consumers can take to protect themselves and the environment from Roundup exposure, the herbicide will continue to be sprayed worldwide.

Until Roundup is removed from store shelves completely, consumers and ecosystems will continue to experience the effects of its use.