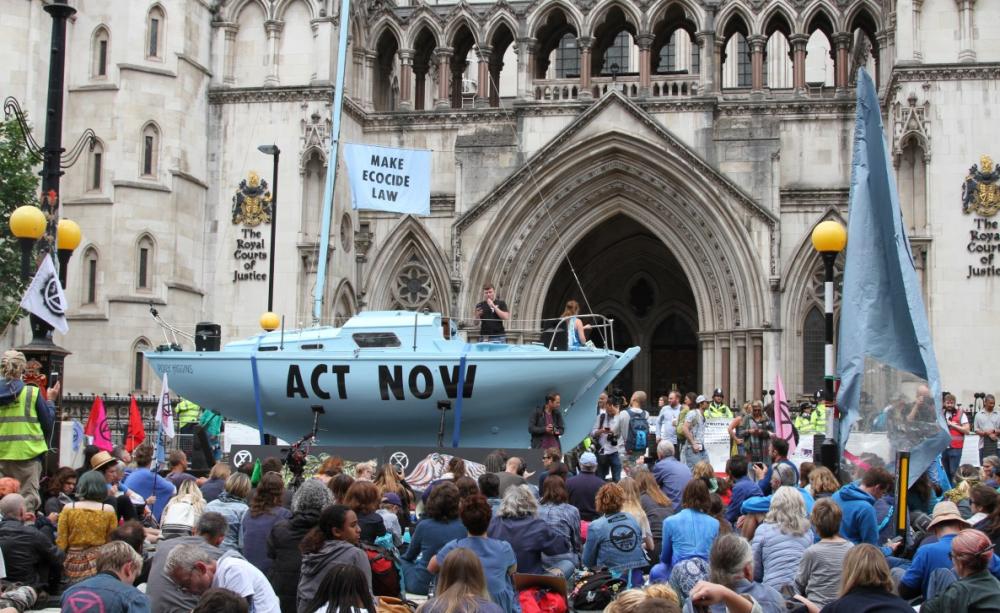 https://rebellion.earth/2019/11/06/extinction-rebellion-wins-landmark-legal-challenge-to-met-police-ban-on-peaceful-protest-2/
Extinction Rebellion
Police action was “unprecedented and unlawful infringement” on the right to protest, according to XR’s lawyers.

The court's decision vindicates our belief that the police’s blanket ban on our protests was an unprecedented and unlawful infringement on the right to protest.

Extinction Rebellion (XR) has won a landmark legal challenge to an attempt by the Metropolitan Police to halt its Autumn Uprising protest in London.

During the second week of protests, the police imposed a new condition on the activists under Section 14 of the Public Order Act 1986, meaning that anyone who continued to protest after at 9pm on Monday 14th October could be arrested.

The case was lodged on behalf of XR by several politicians including baroness Jenny Jones and Green Party MP Caroline Lucas, and high-profile figures such as Guardian columnist George Monbiot.

Lord Justice Dingemans and Justice Chamberlain ruled in favour of the activists, saying that the police had acted unlawfully because the wording of Section 14 is clear that there is no power to prohibit a gathering that has not yet begun, and that it could only be used to impose conditions.

Tobias Garnett, a human rights lawyer for XR, said: “Extinction Rebellion is delighted with the court’s decision,” Tobias said. “It vindicates our belief that the police’s blanket ban on our protests was an unprecedented and unlawful infringement on the right to protest.”

Anyone arrested during the ban who has not been charged with other offences could now sue the police for false imprisonment, XR said.

In a statement, the Metropolitan Police said that it would respect the decision of the court, and consider the judgement before deciding on next steps. The decision to take action against the protest had not been taken lightly, it said.

Metropolitan Police assistant commissioner Nick Ephgrave said: "We firmly believed that the continuation of the situation was untenable.”

The lock-ons, disruption to public transport, obstruction of the roads and encampments in various unauthorised locations created “unacceptable and prolonged disruption” to Londoners, and the police felt that bringing an end to the protest was “both reasonable and proportionate,” Ephgrave said, adding: "I want to be clear; we would not and cannot ban protest.”

During the protests, three bridges were temporarily closed, more than 150 bus routes diverted, and officers pulled away from work in local communities to the city centre.

Officers made a total of 1,828 arrests during the uprising, with 165 people charged as of 6 November. The Metropolitan Police has estimated that the protests have cost it over £24 million.

Catherine Early is a freelance environmental journalist and chief reporter for The Ecologist. She can be found tweeting at @Cat_Early76.