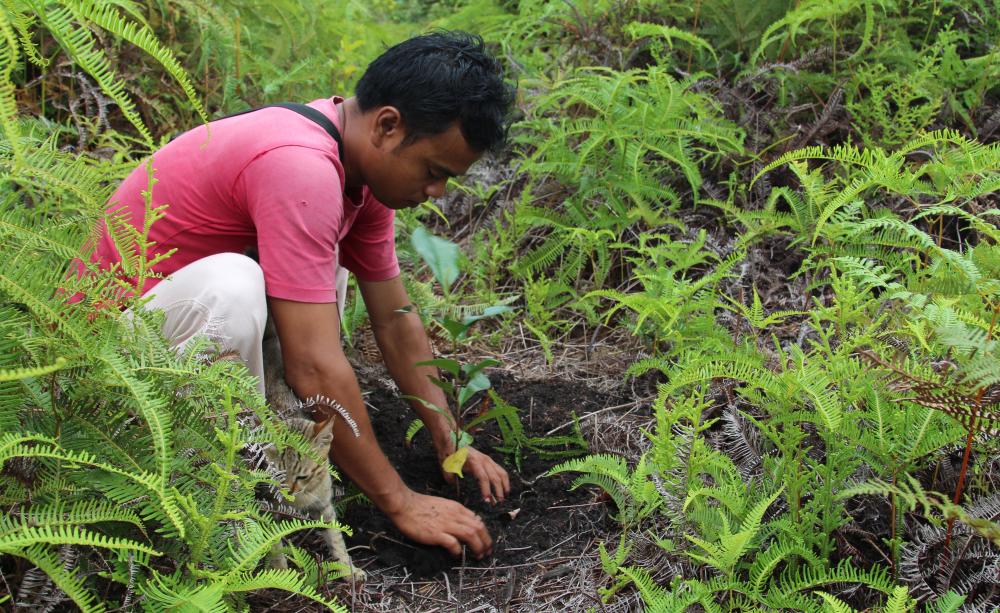 Climate Visuals
James Anderson
How do we revive ideas of mutual aid, cooperation and solidarity in circumstances of scarcity and trauma?

Jonathan Franzen asked an important question in his recent New Yorker article: what if we stopped pretending?

Franzen argues that the climate crisis has already reached a catastrophic level and that in order for us to prepare for it, we need to admit as much. Pretending that the world could still be “saved”, according to Franzen, is a kind of denialism no better than that of the US Republican Party.

Only a few hours after the article was published, it became clear that Franzen’s essay touched a raw nerve among scientists and activists, many of whom took to Twitter to condemn Franzen’s piece – accusing him of spreading “dangerous lies”, of having written the “worst piece on climate change yet published this decade”, and delivering “a slap in the face to young climate justice advocates”.

Indeed, Franzen conveys his message in a confusing and often detached manner. He comes across as the what Mary Heglar has called the “doomer dude” - tall, White men with remarkable sunburns, dishevelled hair and cargo pants, who walk around saying things like “There’s really no point anymore. Humans are done for!”.

Yet looking beyond this arrogance in delivery, Franzen’s essay might have struck a chord because it is actually based on a reasonable premise.

The world is already facing catastrophic, irreversible climate change and ignoring this fact will not help us. The amount of earthquakes, volcano eruptions, tsunamis, floods, cyclones, and sea level surges has doubled in the last forty years. This has caused extraordinary hardships for the people affected and produced millions of climate refugees, even if they are still not recognized as such by international law.

In 2018 alone, more than 17 million people were displaced due to “natural” disasters in 148 countries. Other aspects of the global ecological crisis are equally concerning: Humanity has wiped out an average of 60 percent of the world’s animal population since 1970, ensuring that the sixth historical planetary mass extinction is well underway.

Desertification - the irreversible degradation of land – is putting unprecedented pressure on our planet’s resources.  Over 75 percent of the earth’s land area is already degraded, and over 90 percent could be degraded by 2050, which could displace up to 700 million people in the next 30 years.

And almost all of the world’s oceans are already damaged by human impact, by overfishing, ocean acidification, and pollution. Climate scientist John Schellnhuber concluded: “In the deep ocean, the chemical echo of this century’s CO2 pollution will reverberate for thousands of years.”.

The crux is that our planet would continue to heat up in the coming decades even if humanity stopped emitting carbon dioxide right now. This is due to what climate scientists call “climate inertia”.

In the words of a NASA: “If we stopped emitting greenhouse gases today, global warming would continue to occur for at least several more decades, if not centuries. […] There is a time lag between what we do and when we feel it.”

A finding that is backed-up by a study of prominent climate scientist Susan Solomon that shows that global warming is already irreversible for at least 1000 years.

Moreover, Franzen is right to point out that not only the global climatic system is inert - so is our economic and political system. Unfortunately, he does not explicate what should by now be common sense: that capitalist modernity and colonialism are at the core of the climate crisis.

In any case, this realisation only cements the thesis that a fundamentally unsustainable system is not going to reform itself and nation states, international organizations, tech companies, or Saudi Arabian oil money are not going to solve the climate issue.

But paradoxically, the large-scale social-ecological transformations we need to tackle the problem at its root would require large amounts of energy, time, and labor themselves - not only from a meteorological point of view, but also from a socio-political standpoint. It is therefore important to realise that the point in time at which we could have mitigated a catastrophic climate crisis has long passed.

In fact, for many peoples around the world, the apocalypse that Franzen is describing has long taken place already.  In a recently published interview with author Nick Estes in Dissent Magazine, Estes points out: “Indigenous people are post-apocalyptic. In some cases, we have undergone several apocalypses.

So perhaps the reason why Franzen’s essay evoked such strong reactions is a different one. Perhaps it is because much of the recently reinvigorated Western climate movement relies on a rhetoric of an almost colonial-sounding short-term climate saviorism. It has rallied around headlines like “We have 12 years to limit climate change catastrophe, warns UN” - “Only 11 years left to Prevent Irreversible Damage from Climate Change” and “Climate Change: 12 year to save the planet? Make that 18 months”.

Movements like Extinction Rebellion and the supporters of the Green New Deal have adopted such point of no return rhetoric in their campaigning with surprising success. But apart from the fact that such rhetoric does not accurately represent the mess in which the planet already is, it also constitutes a rather suboptimal long-term messaging strategy.

What will happen in 12 years? Would the climate movement give up in resignation and watch the catastrophe unfold? Would we have to set out new points of no return to avoid even more “catastrophic” scenarios? Instead of stretching the semantics of what truly constitutes “catastrophic”, why don’t we accept and acknowledge the truly astonishing toll that this crisis is already taking?

Of course, acknowledging the already catastrophic scope of the climate crisis should not lead us to adapting a fatalist attitude. And here Franzen, who thinks that “in the long run, it probably makes no difference how badly we overshoot two degrees” is absolutely wrong.

The climate movement must continue to press for climate justice, for the reduction of carbon emissions and for the mitigation of the catastrophic effects of global warming. It must continue to call out polluters, to push for regulations, and to advocate for a Green New Deal.

Solomon puts it the following way: "I guess if it's irreversible, to me it seems all the more reason you might want to do something about it, because committing to something that you can't back out of seems to me like a step that you'd want to take even more carefully than something you thought you could reverse."

Importantly, however, acknowledging the already deadly and irreversible nature of climate change - including the inherent inertia of the planetary climate and the global political system - will allow us to start focusing on developing a progressive vision in times of a planetary ecological crisis.

This is important because ironically, the right already has a vision. In the words of Christian Parenti, it is the vision of nation states as “armed lifeboats”, navigating through an unstable and conflict-prone world. We see this ideology manifesting itself in the increasing criminalization of migration, in rhetoric of the “fortress Europe”, in the surveillance of environmental activists and in the desperate search for quick technological fixes to complex global problems.

To the right, climate change is a security challenge and can be solved through military intervention and technological innovation. It is needless to say that such societal vision is just a continuation of the colonial, capitalist and social Darwinist thinking that has gotten us into this mess in the first place.

What will the left have to offer? How do we revive ideas of mutual aid, cooperation and solidarity in circumstances of scarcity and trauma? What is our vision for justice? How do we hold those accountable who bear the bulk of responsibility for the crimes that have been committed? How do we make spaces for collective mourning for what has been lost on this planet, which is quite literally turning into a large hospice full of dying species? How do we overcome the coloniality and the anthropocentrism that are enshrined in most of (Western) emancipatory thought?

These are, characteristically, questions that Franzen does not pose. It is the task precisely of philosophers, of designers, and of writers and essayists like him to start thinking about those issues rather than to bemoan their own paralysis.

After all, the climate crisis, as Franzen’s fellow novelist Amitav Ghosh put it, is “also a crisis of culture, and thus of the imagination”. So yes – we have to acknowledge that the climate apocalypse is real, but this realisation must catalyse rather than stifle our imagination.

Elias Koenig is a philosophy student based in Berlin, currently working on a DAAD-funded research project on non-Western philosophy and climate change.