How to win a socialist Green New Deal 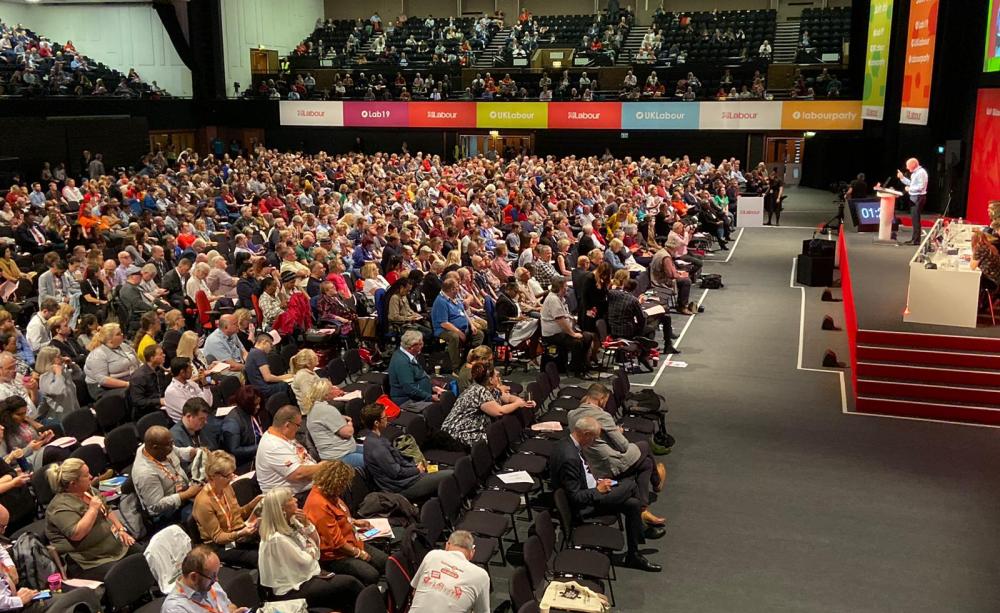 Photo
None
Labour for a Green New Deal has successfully campaigned to have an ambitious motion for net-zero emissions by 2030 adopted by Labour Conference. Here's how.

Passing such a radical Green New Deal motion weeks before an imminent general election is a historic moment. Doing so with strong support across the labour movement is incredible.

Labour Conference 2019 has overwhelmingly voted to support a socialist Green New Deal with an ambitious target to achieve net-zero emissions by 2030.

Taking as a whole, the Labour Party now has the most radical and ambitious climate policy of any major party in the G20.

Passing such a radical Green New Deal motion weeks before an imminent general election is a historic moment. Doing so with strong support across the labour movement is incredible.

Labour for a Green New Deal was founded just six months before our victory at Labour Conference. The campaign has been run on an entirely voluntary basis and our income has been just £5,000 - all raised from a crowdfunder in September.

It’s hard not to compare our achievements in that limited time with such tight resources to what the environmental NGO has failed to achieve with millions collectively spent over decades.

Labour for a Green New Deals’ victory could not have been possible without the hard work of hundreds of talented activists committed to united the climate and labour movements around a bold plan for our shared future.

The campaign has recruited openly to quickly bring activists with skill and dedication into positions of leadership or responsibility. At the same time, we have been careful to set an organisational DNA by prioritising activists who share the campaign’s vision, principles and subscribe to the plan.

The campaign was inspired by lessons from the Bernie Sanders for President Campaign, shared by Becky Bond & Zak Exley in their book Rules for Revolutionaries. It taught us to “ask big to get big”.

This is true of what you ask of people who want to help and the goals you want to achieve. Six months ago few would have even conceived of Labour Conference voting for such a radical climate policy with the support of seven unions. Few would have conceived of the labour movement taking charge of climate action in the UK. But we knew it needed to happen. So we made it happen.

During my time in the environmental movement I’ve heard despicable things said about trade unions over their positions on climate breakdown. This is never a majority, but the movement’s lack of class politics has allowed such hostility to breed and excluded those on the front lines of climate injustice from its ranks.

Labour for a Green New Deal is explicitly socialist. Our analysis is that climate change is fundamentally a class issue with capitalist exploitation and appropriation at the root.

We understand that UK unions have been under sustained attack by decades of neoliberal government. Our solidarity with trade unions and workers is not conditional on alignment regarding specific policy issues.

Our solidarity is unconditional because we are comrades in the same struggle against the immiseration of the working class, and towards public luxury and climate justice.

The FBU moved Labour’s Socialist Green New Deal because firefighters are on the front lines of climate change in the UK now.

Unite’s Assistant General Secretary, Steve Turner, spoke in favour of the motion including calling for “environmental reparations including the free transfer of green technology to the developing world” because the trade union movement is an internationalist one.

It is by celebrating and working from these shared commitments that has allowed us to come together around a radical climate program at this Labour Conference.

It has been widely reported that Labour’s socialist Green New Deal, and specifically its net-zero by 2030 target, received opposition from the GMB union.

This is true and divergent perspectives on whether to include a decarbonisation target proved irreconcilable. This led to two Green New Deal motions being heard - and overwhelmingly supported - on conference floor.

The spirit of debate in the compositing meeting - where all the motions on a topic are synthesised into one, by consensus - was comradely.

Delegates and activists understand and respect the competing perspective of comrades on the other side of the discussion. CLP and union delegates supporting the 2030 target did come under considerable pressure from GMB and the Labour leadership to compromise on the decarbonisation target.

A weaker group may have folded under that pressure from experienced negotiators and powerful figures. Had elected delegates not had the confidence to stand firm, and assert the necessity of such an ambitious target on the grounds of global justice, the successful motion may never have been heard.

Labour and union members have serious power. By standing together we can achieve incredible things.

Celebrate though we must, Labour for a Green New Deal’s organising will not stop here. Labour Conference 2019 is just the beginning. There remains a democratic deficit in the Labour Party.

Although conference has backed our motion, it must still be approved by the party’s ‘Clause V meeting’ which decides the next manifesto. The meeting is composed of the shadow cabinet, national executive committee and trade union representatives. We need to make sure that meeting adopts the socialist Green New Deal in full.

Going forward, Labour for a Green New Deal will build continue to build our power by supporting local groups to form, grow and take action. They will play a crucial role in holding decision-makers in Labour to account and developing plans to deliver the motion’s ambitions.

As Laurie MacFarlane writes, the landmark policies of Labour Conference 2019 came from “the blood, sweat and tears of thousands of thinkers, doers and campaigners” rather than PR lobbyists and special advisors.

There’s plenty more work to do to flesh out the details of Labour’s socialist Green New Deal. If you want to be part of making history, get involved.

Chris Saltmarsh is co-founder and co-director of Labour for a Green New Deal. He tweets at @chris_saltmarsh.