Smart technology has been promoted as 'green' because it can help monitor and reduce carbon emissions and achieve energy efficiencies. But is this the full picture?

The report recommends a shift from “intemperance to sobriety in our relationship with digital technologies”  - basically the idea that individuals and companies could self-limit their purchase and usage of equipment. But this clearly runs counter to the financial imperatives of the big tech companies and their marketing strategies.

Financial considerations are central to the current 5G rollout, and these motives all too easily override ecological concerns. It's no accident that business and the telecom industry have misappropriated the very word “ecosystem”, using it increasingly to refer to digital connectivity.

Ofcom has recently made around £1.4 billion from auctioning off only the 2.4 and 3.4 GHz spectrum range to telecoms companies, with much more still to be made from further auctions.

It is not that economic and environmental interests inevitably run counter to each other, but that they very easily do when such large sums are involved. Tech companies are doing all they can to develop products that condition our behaviour in ways that make us more profitable for them, as Shoshana Zuboff  illustrates vividly in The Age of Surveillance Capitalism.

In this profit-driven sector it will always make sense to stress all imaginable and sometimes imaginary benefits. The critical question is whether claims of smart-facilitated carbon reduction really stack up.

Light Reading, an online communications industry journal, carried a piece on 30 October 2019 expressing anxiety about the huge increase in electricity usage with the arrival of 5G.

John Vidal in Climate Change News likewise quotes research showing that the communications industry could be using 20 percent of all electricity by 2025. John Harris in The Guardian tells us that communications data storage alone will soon have a bigger CO2 footprint than the entire aviation industry, even with the promised use of renewables.

The number of data storage centres worldwide has grown from 500,000 in 2012 to over 8 million today, and would have to increase continually to accommodate 5G and the internet of things. The commitment of some of the big IT companies to renewables, while welcome, seems unlikely to compensate for huge infrastructure and data increases worldwide.

As the Shift Project Report states: ‘The appropriation of a gradually disproportionate part of available electricity increases the tension on electricity production, which we already struggle to decarbonise.’

These figures at the very least suggest the carbon-reduction benefit is far less straightforward than industry promoters would have us believe.

In December 2019, the tech industry group GSMA and the Carbon Trust jointly issued the Enablement Effect Report, which claimed that mobile communication technologies reduced global carbon emissions by around 2,135 million tonnes in 2018, a figure said to approximate to the total emissions of Russia in 2017.

But this is at odds with large increases in ICT-connected emissions identified in the Shift Project’s report in March 2019. The serious divergence between these views must surely partly be accounted for by what Lean ICT holds to be a “continual underestimation” of the direct and indirect environmental impacts of digital technologies.

GSMA consistently ignores embedded energy costs - those involved in the production of devices - in its seemingly exclusive focus on the “avoided emissions factor”. It also ignores emissions associated with device disposal. A search of their report also throws up no reference whatever to the problem of data storage centres.

Besides the carbon issue, Paul Mobbs argues in Land Magazine that there is a “significantly toxic ecological footprint” from mining rare earth minerals essential for our devices. For example, mining cobalt in Africa or lithium in Argentina – key ingredients of lithium ion batteries – is implicated in slavery and in the abuse of indigenous people’s rights.

Mining of the sea-bed for these minerals, another option being pursued, will put fragile marine ecosystems at further risk and, according to Greenpeace, may make climate change worse by releasing carbon stored in deep sea sediments.

All this gives pause for environmental thought. It begins to seem harder to understand why so many in the Green movement embrace digital technologies with less critical evaluation than seems called for.

Have we have become too unquestioningly dependent on these devices? Is the sense of having a useful, exciting and entertaining tool in our hand blinding us to its environmental impact? Is the sense of control that it gives us in fact diminishing human agency and undermining the holism of ecological thinking?

Societal addiction to these admittedly ingenious, sleek and alluring devices surely also subtly detaches us from our surroundings. While collecting data, mapping, monitoring and recording what’s happening in the environment have their place of course for all sorts of reasons, this delivery of mere “information” is not a substitute for empathic human engagement with the living world.

Developments surrounding 5G infrastructure rollout in the form of a vast new array of planned terrestrial masts, antennas and sensors, are set to include the launch – now begun – of many thousands of small satellites to beam down 5G and achieve the industry vision of universal coverage.

The kerosene used by Elon Musk’s SpaceX programme to power the rockets that launch these satellites produces heavy black carbon that stays in the stratosphere for three or four years and promotes ozone-destroying reactions.

In such large numbers (over 50,000 satellites currently planned), the effect on our atmosphere has to be questioned. And so far we have no idea what impact there will be from current trials by Musk and others to develop methane as a rocket propellant.

There are few sights as wondrous or breath-taking as the vast starry heavens on a fine, clear night, but this sight will increasingly be impeded by the numerous satellites criss-crossing our vision.  Astronomers are up in arms about this, both in terms of the visual obstacles to their observations and the radio frequency interference that will seriously hamper radio telescopes.

One group of astronomers is calling for legal action. Weather forecasters are likewise dismayed at the potential interference to their observations.

The ozone layer and earth’s wonderful atmospheric mantle protect us from the worst impacts of cosmic radiation. In a separate article I will consider issues surrounding the potential health and environmental hazards of a huge range of interacting anthropogenic radio frequencies that already surround us and will increasingly saturate our atmosphere.

We should celebrate sustainable and environmentally beneficial technologies that genuinely improve life for all of us on the planet, humans and living creatures. But we must acknowledge real dangers where they are shown to exist, and take a precautionary approach where necessary.

As ecologists know, the delicate balance of life on our planet is one we walk roughshod over all too often. They know too that large unforeseen effects can come from the profitable short-termism of human interventions that lack a holistic view of the biosphere, let alone an imaginative empathy with it.

Matthew Barton is a poet, teacher and translator, and twice winner of the BBC’s Wildlife Poet of the Year. He has translated and edited numerous studies on cellular cancer mechanisms, and edits the Bristol poetry magazine Raceme. 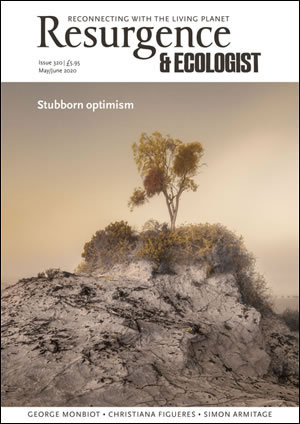