Which will tip first - us or the planet? 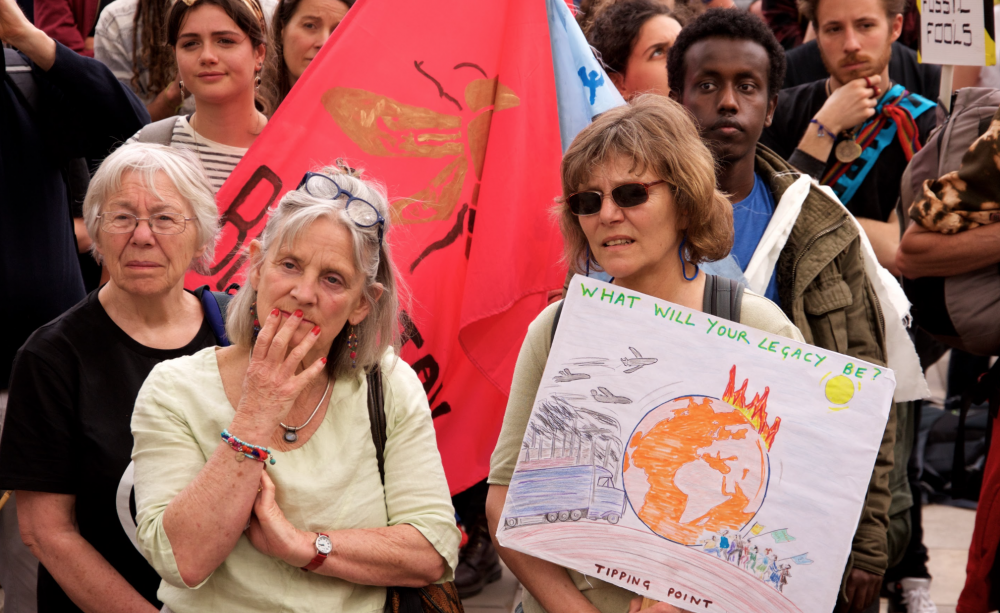 Extinction Rebellion
Gareth Morris
We may be on the verge of a massive, non-linear social transformation to a decarbonised economy. The question is which will tip first - us or the planet?

We are walking in that minefield, stepping into the dangerous unknown. Each fraction of a degree of warming takes us a step closer to setting off the next tipping point.

You stride out into a minefield without a map or guide. Mines surround you, primed to go off, but you don’t know where they are - only that the further you go, the greater the chance of setting one off.

You are humanity, striding into a warming future Earth - the mines are tipping points in the Earth’s climate system. But what do scientists mean when they refer to a tipping point, and why should we be so worried about them?

Complex systems often exhibit abrupt and sometimes irreversible changes. Let’s take an everyday example of a tipping point. Imagine a kayak. You can rock the kayak from side to side and you’ll still return to upright on the water… until you rock beyond a critical angle, then SPLASH! You’ll get dunked. You have crossed a tipping point.

Nature is full of tipping points, and they’re often sudden and catastrophic. Increase the level of nutrients in certain lakes just a little bit too much and they can tip from being crystal clear to being full of green algae.

But it is not always obvious when we have crossed a tipping point. Imagine our kayak again. This time it is approaching a waterfall. At some point the paddler will pass a point of no return, and no matter how furiously they paddle they will have no hope of avoiding the drop. But that irreversible tipping point might easily have been passed before the kayaker was even aware the waterfall was approaching.

Earth’s climate system also displays such tipping points - both the sudden and the subtle varieties.  In fact, according to some researchers, the warming we have caused may already have triggered some very significant tipping points.

In 2014, NASA researcher Prof. Eric Rignot published a paper with colleagues that he said presented “observational evidence that a large sector of the West Antarctic ice sheet has gone into irreversible retreat”, locking in perhaps a metre of sea level rise. Not all glaciologists are convinced we have passed this point of no-return as yet, but if we have passed this tipping point, then there is nothing we can do now to prevent that eventual rise in sea level. It may take hundreds of years to play out completely, but this part of the system will move towards a new ice free state and it will be near impossible to stop or reverse.

We are walking in that minefield, stepping into the dangerous unknown. Each fraction of a degree of warming takes us a step closer to setting off the next tipping point.

Unfortunately, ice sheet tipping points aren’t restricted to the West Antarctic. Take the Greenland ice sheet. We inherited this ice sheet from the last ice age. We know that if the ice sheet were not already there, then it would not be able to grow under the present climate—it’s too warm.

But it’s still with us because when it grew during the ice age, its summit soared to such an altitude that it continues to make enough new ice from the snow falling on its high peak to keep the total ice sheet in balance. However, as the climate warms, the temperature at the summit approaches melting point.

At this threshold a tipping point will be reached. If the ice sheet’s summit starts to melt, it will lose elevation, entering the warmer air below—which will accelerate the melting. At this stage, Greenland will have begun an irreversible melt, ultimately increasing sea levels by 7 metres—enough to inundate many of the world’s coastal cities.

The scary thing is that we do not know where that tipping point lies. As Prof. Stefan Rahmstorf of Potsdam University warns: “We don’t know exactly where the tipping point for the Greenland ice shield is. The IPCC [Intergovernmental Panel on Climate Change] estimates anywhere between one and four degrees of global warming. We are already at one degree warming, so we may well cross that tipping point in the next decades.”

We are walking in that minefield, stepping into the dangerous unknown. Each fraction of a degree of warming takes us a step closer to setting off the next tipping point. The urgent need to avoid the risks of triggering such tipping points was a key reason why world governments pledged to aim to limit global heating to no more than 1.5C above pre-industrial temperatures.

What is more, some Earth system tipping points may be linked together, so that one system tipping might trigger another. For example, freshwater run-off from the melting in Greenland is already implicated in the slowing down of an vast current, the Atlantic Meridional Overturning Circulation, which is estimated to have lost 15 percent of its strength since the mid-twentieth century.

This has led Prof. Michael Mann, of Pennsylvania State University, to say in dismay: “We are 50 to a hundred years ahead of schedule with the slowdown of this ocean circulation pattern, relative to the models… The more observations we get, the more sophisticated our models become, the more we’re learning that things can happen faster, and with a greater magnitude, than we predicted just years ago.”

Oceanographers warn that if the slowdown of this vital current exceeds a critical threshold, then the whole conveyor might suddenly halt, with catastrophic consequences for the climate in Europe. Unfortunately, we have no idea where that threshold is. Our foot may even now be hovering over that mine.

We may be on the verge of a massive, non-linear social transformation to a decarbonised economy. The question is which will tip first - us or the planet?

Perhaps all that is needed to cross the tipping point to a sustainable future is one gigantic push by a mass movement of non-violent direct action. As the shift only becomes apparent with the benefit of hindsight, the only way to find out is to try!

Aaron Thierry has a PhD in Ecology from the University of Sheffield. He was the chair of the Ask a Scientist Live series fourth episode: “Tipping points: what should we be afraid of? How may they end up saving us?”