From degrowth to decolonisation 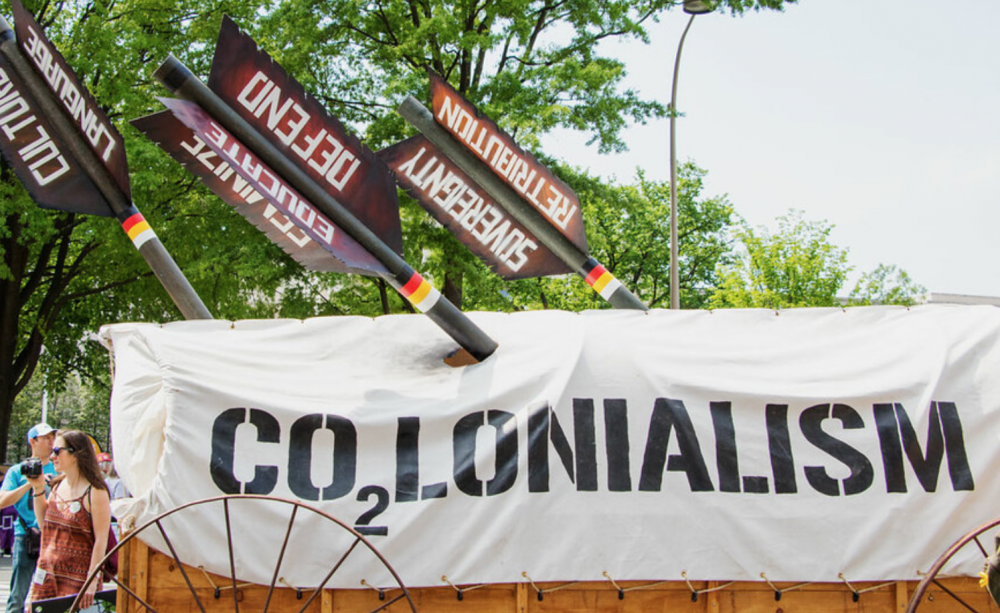 Flickr
Becker1999
How can we use the principles of degrowth to shape a truly decolonized future?

Something about Alexandria Ocasio-Cortez’s Message from the Future didn’t sit right with me. Narrated by the youngest Congresswoman herself, and illustrated by artist-activist Molly Crabapple, this video attempted to paint a post-Green New Deal world.

Reflecting the Congresswoman’s Green New Deal resolution proposed only two months earlier, this video envisioned a future that had won Medicare for All, a federal jobs guarantee, universal child care, and publicly funded election campaigns. Workers were employed all across the United States, without discrimination and with dignity.

This article is an excerpt from Unlearning: From Degrowth to Decolonization.

Scenes showed them building a national smart grid, retrofitting, laying new high-speed-rail lines across the country. The world was vibrant and climate catastrophe had been averted. But still, I wasn’t entirely convinced of it.

In 2018, the Intergovernmental Panel on Climate Change (IPCC) reported that without a radical transformation of energy, transportation, and agriculture systems within the next 12 years, the world would be well on its way to warming beyond 1.5 degrees Celsius, the maximum warming allotted for a habitable planet.

By 2030, global carbon dioxide emissions would have to be cut to 45 percent below 2010 levels and reach net zero by 2050. While, of course, this requires international effort, the United States has cumulatively used the most energy per capita of any country since 1960.

At the same time, the US produces the lowest share of renewable electricity in the world; its military alone produces more greenhouse gas emissions than 140 countries combined.

This bird’s-eye view reveals that the US is unjustly consuming energy at the highest rate, and not simply for the conservation and reproduction of life, but for non-productive expenditures such as luxury and war. Therefore, the socio-ecological transformations that we must make must start in the US.

Yet the video didn’t allude to reducing the US’s energy consumption at all. On the contrary, the video scripts a world where institutions like the military, which, among other things, destroys self-sustaining agriculture, are kept intact. Police officers, elected officials, and soldiers seem to get more airtime than any other occupations.

Relatedly, the video advocates for American workers to receive adequate salaries and benefits, but says nothing about ending the overexploitation of dispossessed peoples and nations around the world through which America’s wealth is accumulated.

Apparently, in this iteration of the future, it is taken for granted but not explained how the oppressed and those oppressing could co-exist in harmony.

Why was this overlooked in the mainstream discourse surrounding this beloved viral video? Certainly, there haven’t been many hopeful depictions of the post-climate crisis future, so I understand the appeal. But a materialist approach, in the tradition of Epicurus and Marx, would interrogate the contradictions of infinite consumption of energy on a planet with finite resources.

That analysis would in fact show that no previous large-scale attempts—capitalist or socialist—were able to remain within ecological limits.

Perhaps these holes stood out to me because I had been engaging with the framework of degrowth. As a descendent of the colonized people of Korea, who is not a US citizen by choice and as someone belonging to the last generation that could overcome the climate crisis, I discovered a pedagogical home in degrowth.

It is a discourse and a movement singularly unmarked by—and furiously against—the post-Industrial societal common denominator of infinite growth. The degrowth movement is, in my opinion, designed for settlers, as well as “arrivants”. Jodi Byrd, a Chickasaw Nation of Oklahoma citizen, defines arrivants in The Transit of the Empire, borrowing from Barbadian poet Kamau Brathwaite, as “those people forced into the Americas through the violence of European and Anglo-American colo- nialism and imperialism around the globe.”

As a yellow arrivant living on stolen land, I made degrowth my duty, an intellectual and political agitation tool towards decolonization.

According to degrowth historian Timothée Parrique, the degrowth movement “started as an environmental concern for decreasing resource use, to then become the spearhead of emancipatory movements against development, capitalism, and economic growth, to finally mature as a utopian project of its own.”

Over time, degrowth became more than a critique of the current growth society, but a fully-fledged alternative to it, “a frame, where different lines of thought, imaginaries, or courses of action come together.” In short, degrowth tells us to care for the earth’s systems, to care for the people, and to redistribute any surpluses back to the land and the people.

Furthermore, by reading degrowth alongside works by Indigenous and Black thinkers such as Tiffany Lethabo King’s The Black Shoals: Offshore Formations of Black and Native Studies, I was able to understand how degrowth could be used in service of decolonization.

She writes about the need to “frustrate liberal (and other) modes of humanism” through “Black abolition and Native decolonization and new forms of sociality and futurity.” The book illuminated the need for “a process of rearrangement” as opposed to an alternative.

This then demanded for the language found in the First Ecosocialist International, a common program of struggle published by “100 people from 19 countries across five continents, including 12 original peoples from [Their] America.” In it, the authors remind us that “the only surplus is this system, and that what is lacking is not an alternative to this system, nor the necessity of creating another possible world nor new models, but to recognize that we are the original model.”

Through these texts, I saw how degrowth could be “a process of rearrangement” back to “the original model".

That original model is not another productivist, extractivist model disguised as a democratic alternative. The model, then, cannot be what is imagined in Ocasio-Cortez’s Message From the Future which does not break with the growth paradigm.

Instead, the original model is a process to tenderly mend what Marx called the “metabolic rift” between human beings and the soil.

Towards the goal of decolonization, achieved - according to Frantz Fanon - only when a natural rhythm is brought into existence, “and with it a new language and a new humanity".

Degrowth is the unlearning formula consisting of care, autonomy, and sufficiency, the three values Timothée Parrique uses to define degrowth. These values are essential for understanding that the end goal for degrowthers isn’t degrowth, it's decolonization.

Jamie Tyberg is a Brooklyn-based movement fundraiser and climate activist, originally from South Korea. Find her on Twitter: @jtbrg.

This article is an excerpt from Unlearning: From Degrowth to Decolonization, reproduced with permission from Rosa Luxenburg Stifung.