Prehistoric saber-tooth was actually a scavenger 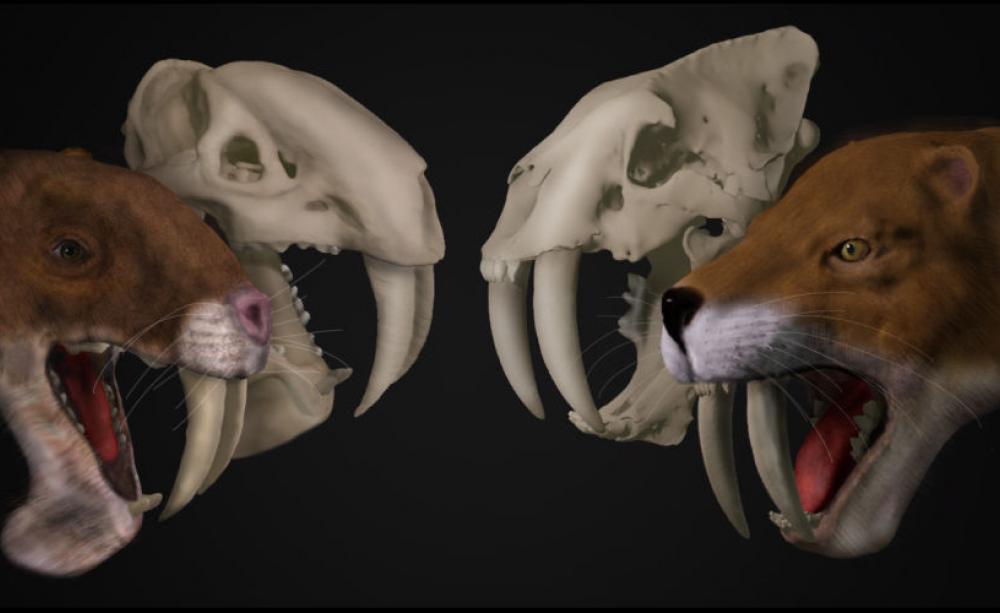 PA
Thylacosmilus atrox, 'terrible pouched knife', an Argentinan jaguar-sized marsupial that lived five million years ago may actually have been a scavenger.

It has impressive canines for sure, but if you look at the whole picture of its anatomy, lots of things simply don't add up.

A saber-toothed animal believed to have been a vicious predator may have in fact been a scavenger, according to new research.

Thylacosmilus atrox, meaning "terrible pouched knife", was a jaguar-sized marsupial that lived around five million years ago in Argentina.

It is popularly known as the marsupial saber-tooth and is often presented as a classic case of convergent evolution - where animals appear similar in form despite having different evolutionary relationships.

The animal had huge, ever-growing canines, which led to speculation that it was an even more vicious predator than the placental carnivores it superficially resembled, such as the saber-toothed cat Smilodon fatalis.

An international team of researchers, led by the University of Bristol, performed a series of studies on the skull and teeth of the Thylacosmilus atrox.

Their findings, published in the journal PeerJ, show the animal was not the fearsome predator it had been perceived as.

Professor Christine Janis, from the University of Bristol, said: "It has impressive canines for sure, but if you look at the whole picture of its anatomy, lots of things simply don't add up.

"For example, it just about lacks incisors, which big cats today use to get meat off the bone, and its lower jaws were not fused together.

"In addition, the canines of Thylacosmilus were different from the teeth of other saber-toothed mammals, being triangular in shape like a claw rather than flat like a blade.

"It's a bit of a mystery as to what this animal was actually doing but it's clear that it wasn't just a marsupial version of a saber-toothed cat like Smilodon.

"In addition to the differences in the skull and the teeth, it was also short-legged and stiff-backed, and lacked retractile claws, so it would have had difficulties in pursuing its prey, pouncing on it and holding on to it.

"I suspect it was some sort of specialised scavenger.

"It may have employed those canines to open carcasses and perhaps also used a big tongue to help extract the innards. Other mammals that have lost the incisors, like walruses and anteaters, also have big tongues that they use in feeding."

Researchers also carried out a statistical study to compare aspects of the skull and teeth of the Thylacosmilus with both present-day big cats and extinct saber-toothed cats.

They found its skull was different from any known carnivorous mammal both past and present.

Biomechanical studies comparing the skulls of Thylacosmilus and Smilodon showed other differences.

Stephan Lautenschlager, from the University of Birmingham, said: "Previous studies by other researchers have shown Thylacosmilus to have had a weaker bite than Smilodon.

"But what we can show is there was probably a difference in behaviour between the two species: Thylacosmilus's skull and canines are weaker in a stabbing action than those of Smilodon, but are stronger in a 'pull-back' type of action.

"This suggests that Thylacosmilus was not using its canines to kill with, but perhaps instead to open carcasses."

The animal's other teeth also pose issues for the interpretation of it as a cat-like predator, a dental study found. As well as a lack of incisors, the molars were small and did not wear down along the sides as seen in an animal feeding on meat.

Larisa DeSantis, from Vanderbilt University in the US, said: "The molars tend to wear flat from the top, rather like you see in a bone crusher. But if you examine the detailed microwear on tooth surfaces, it's clear that it was eating soft food.

"Its wear is most similar to that of cheetahs which eat from fresh carcasses and suggests an even softer diet than fed to captive lions. Thylacosmilus was not a bone-crusher and may have instead specialised on internal organs."

The research, entitled An eye for a tooth: Thylacosmilus was not a marsupial 'saber-tooth predator', is published in PeerJ.

Claire Hayhurst is a reporter with PA.