The search for climate resilient crops 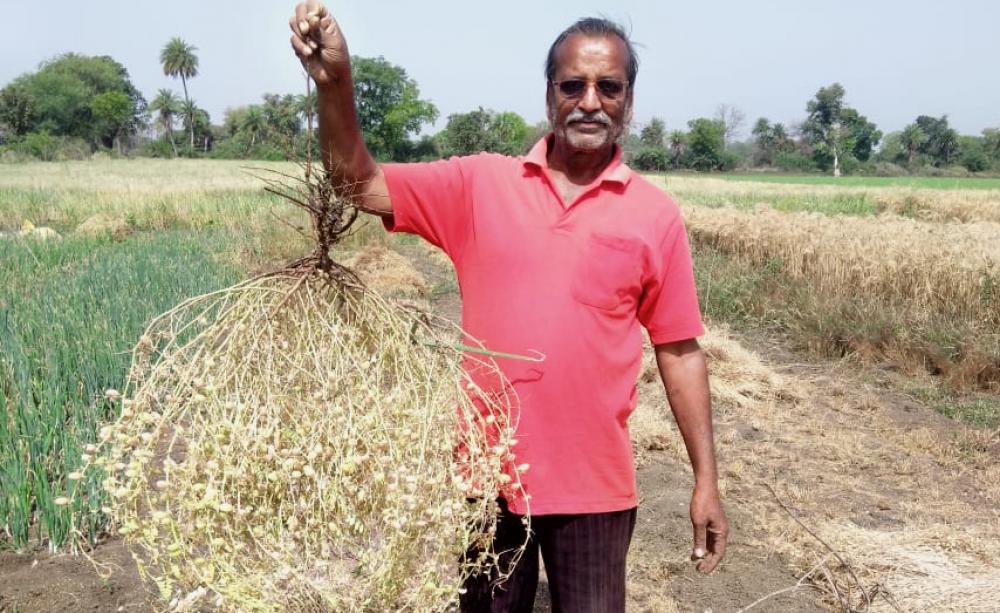 Rao Gulab Singh Lodhi, a farmer from Madhya Pradesh, a semi-arid region in central India, cultivated a variety of chickpeas in a small portion of his land in the 2019-2020 season.

Rao Gulab Singh Lodhi / The Ecologist
Creative Commons 4.0
Climate breakdown will stress essential food crops. Scientists and farmers in India are working together to find a solution for chickpeas.

Crops like these are not very important or popular in the Western world - and hence fail to garner enough research attention.

“The evidence of climate breakdown is clear and its impact on agriculture and food security is widespread,” said Professor Rajeev Varshney, the research program director for Accelerated Crop Improvement Program at International Crops Research Institute for the Semi-Arid Tropics (ICRISAT).

Varshney has been spending a lot of time studying legume crops, and chickpeas in particular, going back to 2005. He told The Ecologist: “In the changing climate, legume crops like chickpea have immense potential to help the marginalised.”

Chickpeas are a cheap source of protein, micronutrients and fibers, and have a special significance amongst vegetarians and in countries across Asia and Africa — where about 75 percent of chickpeas are grown.

This article has been published through the Ecologist Writers' Fund. We ask readers for donations to pay some authors £200 for their work. Please make a donation now. You can learn more about the fund, and make an application, on our website.

But, Varshney warns, “with an increase in the frequency of heat waves, water unavailability, unpredicted floods and droughts, the production and productivity of the crop has seen a negative  impact, like any other.”

Despite the importance of the crop in Asia and Africa, focus on the legume crops, like chickpeas has been insignificant till 2005.

The team at ICRISAT became the first in the world to explore the crop to find climate resilient varieties - and have found those with 10 percent higher productivity. Moreover, the varieties were developed in half the expected time, speeding up the research using advanced technology.

“It's not only important to make agriculture climate smart but also to make it available to the marginalised as fast as possible,” adds Varshney.

Typical development of any new crop varieties can take anywhere between eight to 10 years to reach the farmers from the labs. The research by ICRISAT is targeted to reduce this time.

Crops like these are not very important or popular in the Western world - and hence fail to garner enough research attention.

India is the largest producer and consumer of chickpeas. The crop can be grown in almost all parts of the country. Nevertheless, regional disparities exist.

With the advent of the green revolution in the 1960s, northern states of India with good soil moisture and access to water, inclined more towards the production of crops like rice and wheat. This moved chickpeas production to the semi-arid regions of central and south India.

“Since chickpea production needs fair soil moisture, it became difficult for the farmers to keep up the yield of the crop with the recurring droughts, heat waves and changing climate,” said Varshney.

Even though India is the largest producer of chickpeas, production has not increased much when compared with other crops.

It was in 2005, that chickpeas caught scientists’ attention at ICRISAT and they began drawing a genetic atlas of chickpeas.

The experts gathered information on the various kinds of chickpeas varieties grown in several parts of the world. Plant lines from over sixty countries were collected.

This became one of the earliest steps in the process of development of the climate resilient chickpeas variety. The ICRISAT genebank hosts over 20,000 accessions, or chickpea lines, These have a variety of genetic properties, with a range of agronomic traits.

"Once the genetic information was available to us, the process became shorter," Varshney added.

Genes that gave the plants a higher drought tolerance were chosen and then bred to develop the desired chickpea seeds.

This method, which is known as Genetic Marker technology, is different from the conventional methods as well as from the other technologies such as the genetic modification of plant varieties.

“The conventional breeding processes to develop drought tolerance are quite extensive, expensive and unsure” says Dr. Chellapilla Bhardwaj, the scientist at the Indian Council of Agricultural Research who developed the drought tolerant chickpea variety in partnership with ICRISAT.

The conventional breeding is a multi step hit and trial process, wherein, two plants are bred and later the best performers are chosen depending on the production during the trial phases.

“This has other problems as well. If there are unpredicted rains, breeders will fail to perform their experiments on drought selection in the right conditions. Longer term season generation advancement is not possible, either," adds Bhardwaj.

Genetic marker technology eliminates any unexpected challenges from weather and climatic changes. The chickpea drought resistant seed development, which otherwise would have taken more than eight years was completed in just three years.

Rao Gulab Singh Lodhi, a farmer from Madhya Pradesh, a semi-arid region in central India, cultivated a variety of chickpeas in a small portion of his land in the 2019-2020 season.

He told The Ecologist: “My peers informed me about this new chickpea variety. I got curious and got a handful of seeds, just for experiment. I am not only satisfied but extremely happy with the production and quality.”

Lodhi developed 55-60 kg of seeds from 0.5 g of his experimental produce. Apart from distributing these seeds to the local farmers, Lodhi also intends to plant chickpeas on his 20 acres of field in the coming season. He estimates he will be able to fetch about 150 quintals per acre.

Even though the importance of the crop in India and several African countries for food and nutrition is well known, the crop was not fully researched before the work at ICRISAT.

Varshey said: “Crops like these are not very important or popular in the Western world - and hence fail to garner enough research attention.”

Chickpeas are referred to as one of the orphan crops: Legume crops like chickpeas are not traded as much as other crops in the international market and do not receive the same kind of attention in research and development.

Though India and this research is first of its kind, chickpeas is not an exception. “Advance technologies for the production of climate resilient crop varieties have already been used in other crops like rice, vegetables etc. in the west,” said Varshney.

“However, the incentives for private companies to invest in research of open pollinated crops are limited. Hence, public research has to be advanced for the larger benefit of small and marginal farmers like that of Asia and Africa.

"It is important for a country like India to hasten the development process of new drought tolerant varieties — where effects of climate change are grave and visible, " concludes Varshney. According to FAO, climate change will affect the farmers in poor and developing countries disproportionately.

Using advanced technologies, such as the one used by the scientist at the ICRISAT, high yielding varieties with good resilience to adapt to climate change have immense potential to safeguard the farmers from unseen climate challenges, along with ensuring food security and nutrition.

Monika is an independent journalist and writes about agriculture, sustainability and environment. Her work is available on her website and she tweets @akinom_ladnom.

This article has been published through the Ecologist Writers' Fund. We ask readers for donations to pay some authors £200 for their work. Please make a donation now. You can learn more about the fund, and make an application, on our website.