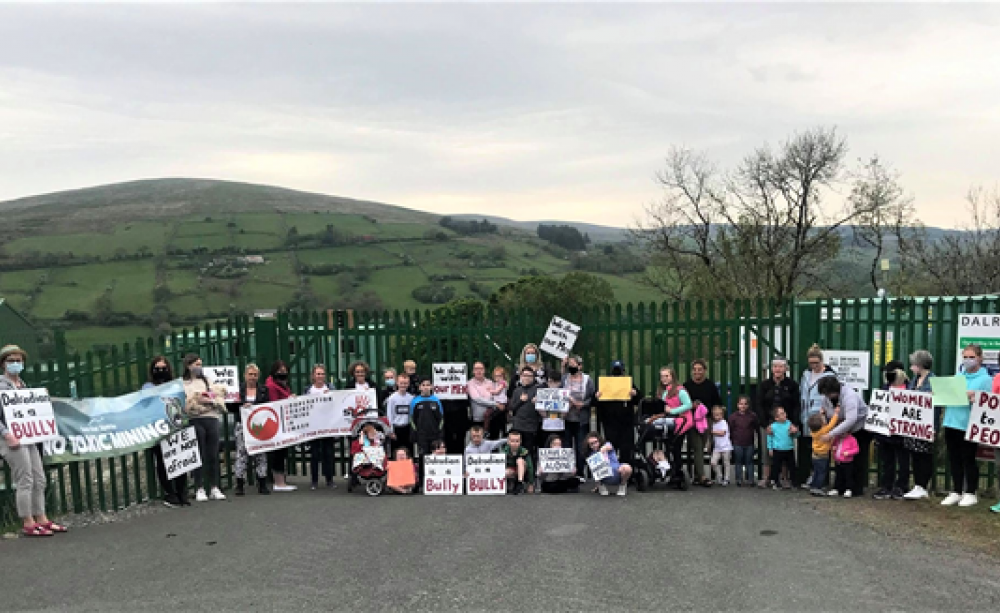 Ireland has been identified as a hotspot in the European mining boom. Women across the country are fighting back.

People here love their land, there’s just so much history, past generations have suffered so much to hand it to us, and we want to be able to pass it to the next generation intact.

The island of Ireland is one ecological unit and two jurisdictions. Divided by a border that water systems, pollutants and the air do not recognise. It is an island united by the fact that both governments’ neoliberal policies actively invite the interest of the mining industry.

Ireland, North and South, has been identified as a hotspot in the new European mining boom. To date, twenty-seven percent of the south and twenty-five percent of the North has been concessioned for mineral prospecting licences.

This is the first article published through the Ecologist Writers' Fund. We ask readers for donations to pay some authors £200 for their work. Please make a donation now. You can learn more about the fund, and make an application, on our website.

The global gold industry has been a driver of this mining rush, one of the most ecologically and socially destructive industries in the world. From the Sperrins in Counties Tyrone and Derry to Donegal and Connemara, rural communities are being confronted with plans to mine for gold. Most of the interest is coming from Canadian mining corporations.

While the pressing need to decarbonise our economies is often cited as the reason for increased mining around the world, there is often little to no debate on the need to reduce our consumption, particularly in the Global North. It is clear we cannot mine our way out of the climate crisis without sacrificing rural and Indigenous communities.

People here love their land, there’s just so much history, past generations have suffered so much to hand it to us, and we want to be able to pass it to the next generation intact.

The Sperrin Mountains are a rolling upland Area of Outstanding Natural Beauty (AONB) in Northern Ireland. Here, Dalradian Gold Limited, a Canadian exploration company, has applied to open a large gold mine, close to the village of Greencastle in County Tyrone.

In 2017 Dalradian submitted a huge planning application extending to 10,000 pages. They are seeking approval for an underground mine, a 17 storey high waste stack facility, and a processing plant. Opposition is fierce, with 37,000 objection letters lodged to date. This journey has not been easy, with plans dividing the community and earth defenders facing threats and intimidation.

Local communities point out the impacts of such plans are numerous and varied, from biodiversity destruction, air pollution, water contamination, health impacts for local people, and a loss of livelihood and sense of place.

Among the ecological impacts of such a project is the threat to tributaries which flow into the transboundary Lough Foyle. The Owenkillew (SAC) and Owenreagh (ASSI) rivers run adjacent to the proposed site. Both are protected as the home to rare freshwater pearl mussels.

Regardless, the Department of Agriculture, Environment and Rural Affairs granted Dalradian permission to discharge effluent into these rivers. In November 2019, Fidelma O’Kane, Save Our Sperrins member, successfully challenged this decision in the High Court.

The South of the Island is also facing the incursions of the global gold mining industry. Conroy Gold have been exploring in County Monaghan, while Arkle Resources, a Canadian company, have two sites in mind- one in Wicklow and one in Inishowen, County Donegal.

Resistance group Save Inishowen have been opposing these plans since the threat emerged in 2016. In Connemara, a Gealtacht (Irish speaking) region, resistance group Protect Connemara has successfully seen off gold prospectors BTU Metals Corp of Vancouver. They petitioned the Government to oppose the plans, highlighting that mining would damage the local economy which relies heavily on tourism and small scale farming.

Donegal, The Sperrins and Connemara are all rural landscapes that have faced marginalisation and socio-economic exclusion. However, they are also incredibly rich and ancient landscapes shaped by millennia of culture and tradition. Landscapes which are of immeasurable intrinsic value.

Jacqueline Keenan from Greencastle explains: “People here love their land, there’s just so much history, past generations have suffered so much to hand it to us, and we want to be able to pass it to the next generation intact. There’s a deep down rootedness in us”.

Around the world women are on the frontlines of the fight against extractivism. In Ireland, women are a vital component of these struggles. These land defenders are taking on leadership roles as well as less visible roles that sustain movements, such as critical domestic and administrative tasks. The women are from all walks of life, from artists, house wives, linguists, teachers, lawyers to farmers.

Tactics have ranged from public meetings, judicial reviews, an occupation of Dalradian’s proposed site near Greencastle, as well as in person events and webinars to share experiences and foster solidarity with other frontline communities from Peru, Cyprus, Romania, Colombia to the Lakota Nation.

Resistance is growing across the Island, not only to gold but to a range of mineral prospecting and mining. In February this year a network of community groups was formed with the name CAIM (communities against the injustice of mining).

Rose Kelly from Save Inishowen said: “It’s important this network is formed because we live on a beautiful island and it’s under threat from extractivism. It’s so important that we work together as communities who are on the frontline of this damaging industry.”

“Caim” is a Celtic term, meaning a circle of protection for the more-than-human community of life. It is an ethos embodied by the women striving to keep the gold in the ground.

V’cenza Cirefice is an activist-researcher undertaking a PhD in National University of Ireland, Galway. She explores resistance to extractivism from a feminist perspective.

Ms Cirefice is the first recipient of a grant from the new Ecologist Writers' Fund, established earlier this year to support and platform writers from historically under-represented communities within environmental journalism, be that writers of colour, women, the LGBTQI+ communities and the working class. Please continue to support the Ecologist Writers' Fund by making a donation now.