Lies about Assange and UN human rights jurists imperil us all 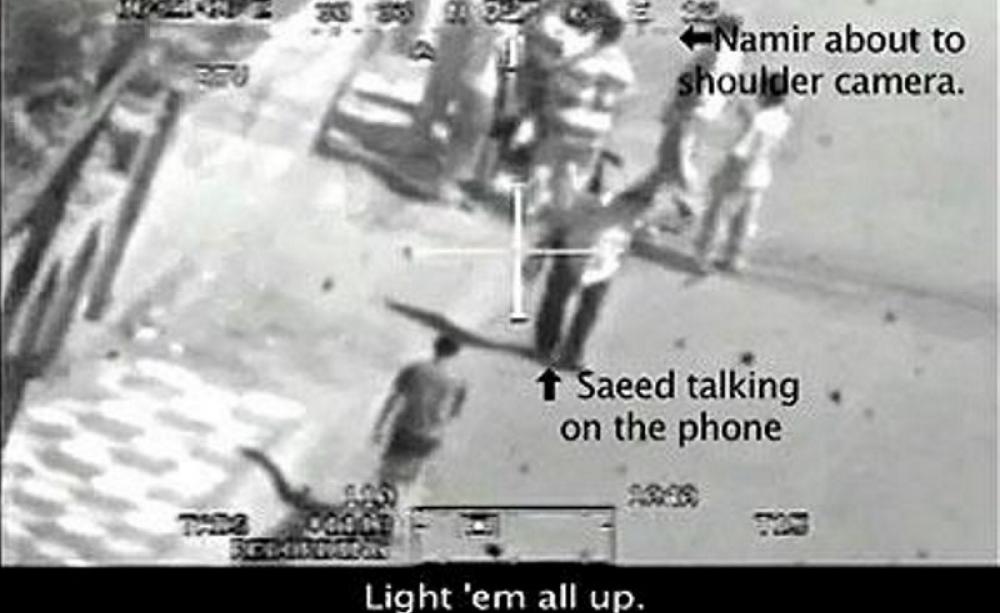 'Light'em all up!' From video footage from a US Apache helicopter attack on civilians and children in 2007 posted by Wikileaks.

The defence secretary, 'comedians' on BBC Radio's News Quiz, and the entire media commentariat have ganged up this weekend up to pour mockery and poisonous lies over Julian Assange and the UN's human rights jurists, writes Jonathan Cook. As they attempt to fight off the UN's 'guilty' verdict against the British state, they are putting dissidents at risk everywhere.

In their desperation to keep Assange reviled, British officials and their collaborators in the media are destroying the last vestiges of protection for political dissidents around the world.

Something extremely dangerous is happening before our eyes as we watch British officials and the corporate media respond to yesterday's ruling of the UN Working Group on Arbitrary Detention, which found that Julian Assange is being arbitrarily detained in the UK.

A major international institution upholding the rights of political dissidents around the world as they face illegal detention, abuse and torture is being turned into a laughing stock with the enthusiastic connivance of supposedly liberal media outlets like the Guardian and the BBC.

Reporters, columnists and comedians are pouring scorn on the UN group, legal experts who until yesterday were widely respected in the west and seen as a final bulwark against the most oppressive regimes on earth.

In desperate moments, confined and isolated, dissidents like Aung Sang Suu Kyi in Burma and opposition leader Anwar Ibrahim in Malaysia could take solace from the knowledge that a respected UN group stood shoulder to shoulder with them. In some cases, faced the weight of its opinion, regimes preferred to release such dissidents.

Now the UN Working Group's status and the significance of its decisions are being irreparably undermined. In their desperation to keep Assange reviled, British officials and their collaborators in the media are destroying the last vestiges of protection for political dissidents around the world.

The most glaring example of this process, as pointed out by the former UK diplomat Craig Murray, is an outright lie being peddled by the British Foreign Secretary, Phillip Hammond. He says the UN panel is "made up of lay people and not lawyers."

In reality, the panel consists of distinguished legal experts in the field of international law. You can see their CVs here in Craig Murray's article, which adds:

"You will not recall much media coverage of the dissenting verdicts in the UK Supreme Court decision. There was almost none. By contrast, the media are showing an obsessive interest in the dissenting Ukrainian member's opinion in this UN decision."

Unlike Hammond, who is doubtless looking over his shoulder to the other side of the Atlantic, these are truly independent figures - that is, they are not beholden to the governments of the countries they are from.

In their desperation to keep Assange reviled, British officials and their collaborators in the media are destroying the last vestiges of protection for political dissidents around the world.

And if Mats Andenas, the Norwegian chair of the Working Group for much of its investigation, is to be believed, they are brave too. He says the panel has come under intense pressure from the US and UK to arrive at a decision contrary to the one they actually reached, as Murray reports:

"Norwegian Professor Mats Andenas, the chair of the Working Group who started the work, has today stated that the UK and US put enormous political pressure on the members of the UN working group, which they had resisted courageously. Can anybody think of a reason why the dissenting Ukrainian member might have been less able to resist enormous pressure from the UK and US governments?"

What is this case really about?

We know why the US wanted the panel's decision to go against Assange - after all, he is in the Ecuadorean embassy precisely because he fears extradition to the US, where a secret Grand Jury is awaiting him.

But one has to wonder why the UK was so keen to overturn the Working Group's ruling. Doesn't the UK claim it is simply a "bobby on the beat", trying to uphold the letter of the law as it spends millions on policing Assange's detention? If the UN group says Assange should go free, that's a nice little saving for the British taxpayer, isn't it?

Hammond's lie has not been challenged in the British media, even though a quick Google search would prove it is a falsehood. And now Murray informs us, the Foreign Office's official spokesman has said the government department stands by the lie. In short, Hammond's lie is no longer simply one politician's foolish spin, but the official view of the diplomatic service.

The readiness of all sections of the British media to spread this lie and even expand on it is illustrated by a truly despicable piece of journalism from the Guardian's columnist Marina Hyde. She is not some freelance blogger; she's one of the most senior staff writers at the newspaper. Her voice can be considered to reflect the prevailing view of the paper's editors.

Hyde not only echoes Hammond but uses her well-known cutting wit to deride the UN panel. Apparently, these leading experts on international law are really know-nothings:

"I don't want to go out on too much of a limb here, but my sense is that the finest legal minds are not drawn to UN panels as a career path. ... Perhaps UN panellists are like UN goodwill ambassadors, and even Geri Halliwell could be one. ...

"As for their almost-amusing diagnosis of 'house arrest', the only possible rejoinder, if you'll forgive the legalese, is: Do. Me. A. Favour. Assange's bail conditions - I'm sorry if the term is confusing to the panel - saw him placed with an electronic tag in a stately home from which he was free to come and go all day long."

Similar ridicule has already been heaped on the UN decision by a popular BBC comedy show, slowly settling in the British public's mind that Assange is a rapist refusing to face the music (even though he has not yet been charged); that the UN's legal experts are buffoons who cannot hold a candle to our own resolutely independent judges; and that Britain is a disinterested party simply honouring the letter of the law.

The degraded discourse about the UN group's decision does not just threaten Assange, but endangers vulnerable political dissidents around the world.

The very fact that Hyde and her ilk are so ready to sacrifice these people's rights in their bid to tar and feather Assange should be warning enough that there is even more at stake here than meets the eye.

Jonathan Cook is an award-winning British journalist based in Nazareth, Israel, since 2001. A former Guardian reporter, he now writes for Middle East Eye, CounterPunch and other media. In 2011 Jonathan was awarded the Martha Gellhorn Special Prize for Journalism.

This article was originally published on Jonathan Cook's website.