Flint water crisis - will anyone be prosecuted? 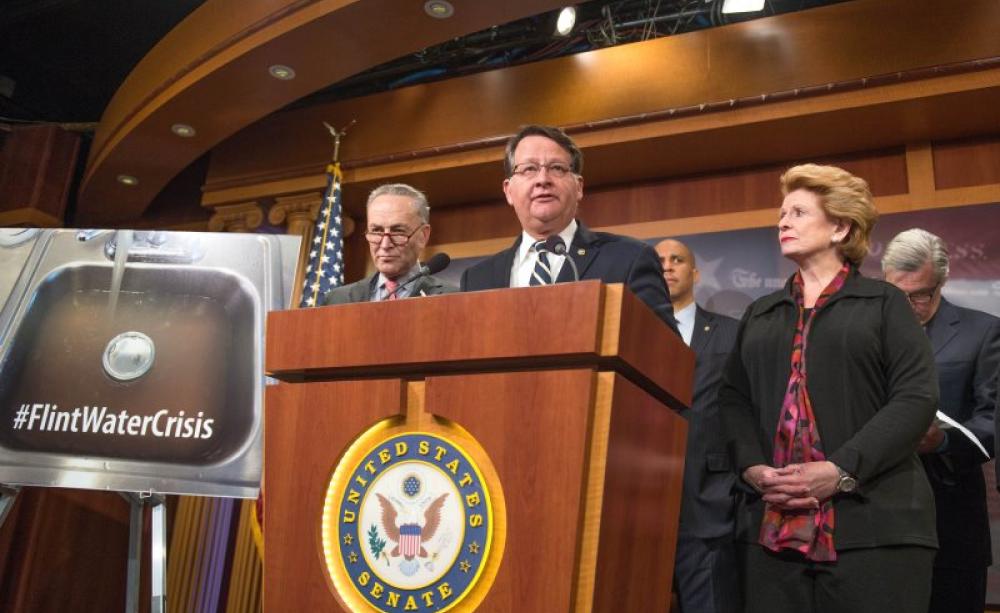 last month announced an amendment to the Energy Policy and Modernization Act to help families in Flint, Michigan who have been exposed to lead poisoning through contaminated drinking water. But it will do nothing to put those responsible for the crisis in jail. Photo: Senate Democrats via Flickr (CC BY).
Amid the growing call for those guilty of causing Flint, Michigan's water crisis to be prosecuted, Jane F. Barrett finds little prospect of criminal charges under the Safe Drinking Water Act. But federal, state and common laws offer prosecutors a range of potential charges, from malfeasance, misfeasance and nonfeasance to involuntary manslaughter.

Forty years later, Congress has passed multiple amendments to the SDWA, and regulatory agencies have adopted complex and lengthy regulations designed to prevent crises like the catastrophe now occurring in Flint, Michigan. But Flint's water is still undrinkable and dangerous.

If allegations prove accurate, government employees of both the city of Flint and the state of Michigan appear to have violated the SDWA by failing to comply with regulatory requirements designed to keep Flint citizens safe from lead-contaminated drinking water.

The SDWA requires the US Environmental Protection Agency (EPA) to establish national standards for contaminants, such as lead, in public water supplies that could adversely affect public health.

Both Michigan law and the SDWA require public water systems to monitor their water supplies and report monitoring results to state regulators. The sampling and monitoring must be conducted according to precise procedures in order to ensure accurate results. The Michigan Department of Environmental Quality (MDEP) must report on multiple issues to EPA.

For lead and copper contaminants, the protocols are spelled out in the Lead and Copper Rule (LCR), which EPA published in 1994. The rule's goal is to make water less corrosive and prevent the leaching of lead and copper from plumbing and drinking water distribution system components, including piping that feeds into homes and the taps from which the water flows.

In this case, it is alleged by plaintiffs in various lawsuits that Flint and MDEP employees broke the law by failing to properly treat water taken from the Flint River. Then, when complaints started to come in from citizens, state and local officials were accused of not only failing to sample properly, but also withholding information about health and contamination levels from EPA and the citizens of Flint.

Understandably, critics are demanding criminal prosecution of somebody for this debacle.

EPA's Office of the Inspector General OIG) is investigating EPA's role in the crisis. The OIG, among other responsibilities, investigates fraud, waste and abuse, as well as the efficiency and effectiveness, of the EPA. And on the local level, the Michigan Attorney General's Office (AG) appointed a special counsel who is working with a task force of investigators to determine if any state laws were violated.

But the question remains: who can be prosecuted and under what law?

However, there are numerous, traditional federal criminal statutes, known as Title 18 offenses, that may apply. Specifically, prosecutors will likely evaluate if any person submitted false statements; obstructed EPA's ability to perform its duties; destroyed, altered or falsified records in an investigation; or conspired to do any of the above. These statutes carry significant penalties.

Prosecutions under the SDWA are rare. There have been a handful of prosecutions of individuals and one private water services company for submitting false reports related to the operation of a public water treatment system. However, I am unaware of any prosecutions of regulators for failing to enforce environmental regulations.

At the state level, individuals could be prosecuted for failure to carry out their legal responsibilities or doing so in a negligent way. These common law crimes - malfeasance (doing a wrongful act), misfeasance (doing a lawful act in a wrong manner) or nonfeasance (willful neglect of duty) - all can be prosecuted under the Michigan Penal Code.

Given the seriousness of the Flint water crisis, multiple federal and state investigative agencies will be combing through documents, interviewing witnesses and evaluating the scientific evidence to determine who knew what and when they knew it - the ultimate question in every criminal investigation.

Jane F. Barrett is Professor of Law, University of Maryland.