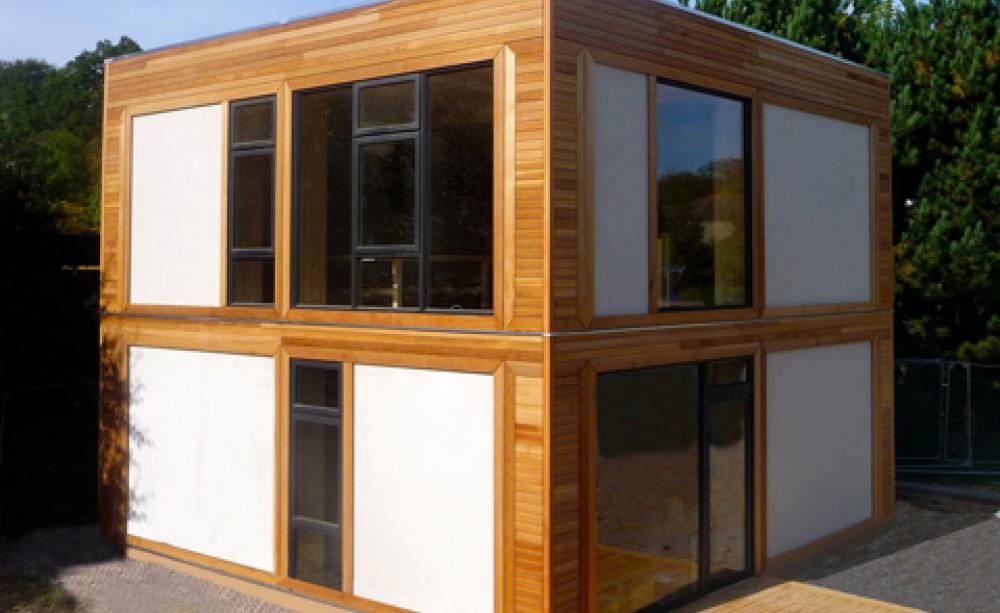 The Balehaus. The prefab panels are made from compressed straw and covered with a lime render, making them highly insulated but also breathable

A new project at Bath University shows that building with straw is not just eco-friendly, but cheap, easily adaptable and fully recyclable at the end of its life

Forget for a minute that the technique first found fame on Grand Designs. And banish too images of three little pigs and huffing, puffing wolves. BaleHaus is an experiment in sustainable straw-bale construction that its creators hope will form a radical, replicable blueprint for housing in the UK.

The first thing to notice about BaleHaus is what you don't notice: straw. In fact, BaleHaus’s primary building material is nowhere to be seen, compacted out of site within timber frames, sprayed with three coats of water-resistant lime-based render, and transformed into prefabricated ModCell panels, named after the company that developed them.

Why straw? Well, for one it has excellent insulation properties: at 490mm thick, the panels are effective at keeping warmth in, and wind, cold and noise out. Its breathability also mitigates against the build-up of moisture in the walls, so there is no damp or decomposition.

The two-storey building on Bath University campus was completed in September and officially opened last night. This prototype model will be used to assess thermal performance, acoustics, air-tightness and relative humidity. There are 66 wireless sensors fitted within the panels, another 12 in the interior of the house, and, ironically, a rack of inefficient incandescent light bulbs that allow scientists to replicate the body heat and activities of an average family (just as well, as there is no bathroom or kitchen as yet). The panels have already undergone fire safety testing to temperatures of more than 1000C.

Britain already has plenty of straw-bale buildings – the York EcoDepot and Torfaen EcoBuilding in Wales among them – but not all are residential, and none yet has really challenged the way we build commercial housing.

The BaleHaus team, on the other hand, is agitating for nothing less than a prefab revolution.

The BaleHaus concept includes a radical vision for decentralised building material production: the team envisage the house's constituent panels being made in 'Flying Factories' on farms within 10 miles of the construction site, then fitted together on pre-built foundations.

Local wheat straw and other materials will be used, and local workers will put the panels together. The engineered Glulam (glued-together timber off-cuts) frames are sourced locally too, if you live in Switzerland or Germany; though as Pete Walker, director of Bath University’s BRE Centre for Innovative Construction Materials, points out, UK timber comes from Scotland, and if you live in the south of England would require a similar road journey. In fact, the technology does not yet exist here to create this stable, strong engineered timber. Indeed, less than 10 per cent of timber used in the UK comes from these shores.

'We want this to be a disruptive technology in the housing sector,' he says. 'With no business model to restrict us, we are starting from a different point, and with the UK expected to reduce its greenhouse gas emissions 80 per cent by 2050, the entire industry is scratching its head, wondering how. Here’s how.'

The load-bearing panels can support three storeys in any number of configurations. At the end of their life, all components can be reused, recycled, used as biomass or composted. They have a 50-year warranty but a lifecycle of at least 75 years, according to BaleHaus’s designer Craig White, who adds that the world’s oldest straw bale house, built in Nebraska in 1886, is still going strong.

Inside there is something of a Swedish sauna feel to the house, minus the heat. Wooden walls divide up a bare wooden floor; the only piece of furniture is a long wooden table upstairs. When the windows are shut it feels snug, as you’d expect from a building constructed to super-insulated PassivHaus specifications. With its airtight construction and triple glazing, the house is designed to reduce heating costs by 85 per cent. Any extra heat required may be supplied by a biomass boiler or solar water system.

Homes built to current building regulations can expect to emit 3.1 tonnes of CO2 annually, while BaleHaus boasts emissions of 1.6 tonnes. More than this, White argues, his 'photosynthetic architecture' – building the house from materials that absorb CO2 as they grow – effectively renders it carbon negative. The timber and straw for each BaleHaus sequesters 40 tonnes of CO2, leaving the post-manufacture house in 'carbon credit' worth 10 years of fossil fuels or 40 years of renewable energy.

As for the cost, ModCell’s marketing and operations director Finlay White estimates BaleHaus as it stands cost £130,000 to build, including foundations, but that price will fall as more are constructed. Although this is some 10-15 per cent more expensive than the cost of a house built using traditional materials and methods, he says the cost will be recouped over its lifetime through reduced heating and increased efficiency. A single dwelling is able to achieve level 5 of the Code for Sustainable Homes, and it is hoped that BaleHaus communities will make achieving level 6 feasible. The project has already attracted interest from one of the country’s largest homebuilders, Barratt, as well as urban regeneration specialists Urban Splash and igloo, and land management and agriculture experts Akkeron.

So if straw is in high demand in your area and a Flying Factory opens up in a local barn, keep an eye out: a BaleHaus – perhaps an entire BaleTown – may be on the way.

Eifion Rees is a freelance journalist