Arcola theatre: on a mission to be the world's first carbon neutral theatre 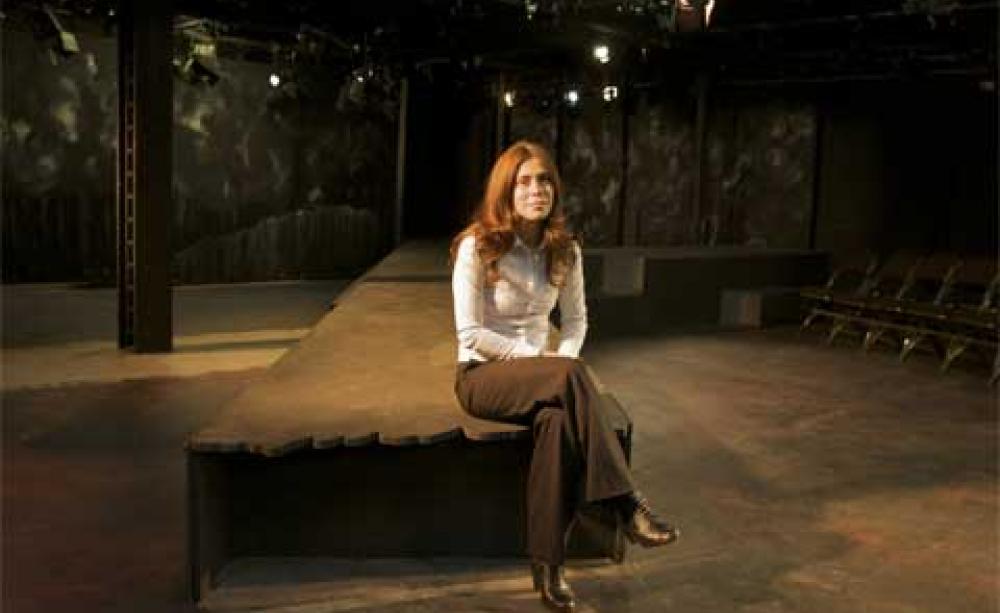 Leyla Nazli co-founded Arcola Theatre in 2000 with Mehmet Ergen. It aims to be the world's first carbon neutral theatre

Arcola Theatre, one of London's best-respected small theatres has just moved into what is hoped will be the world's first carbon neutral theatre, in the heart of East London.

In a whirlwind tour of Arcola's new home, the Colourworks Building in Dalston, I was introduced to its two new studios, halfway through set design process. So far, so normal. Then came a chemical engineer sitting amid a string of low energy theatre LEDs and hydrogen batteries in Arcola's dedicated research lab. As conversation encompassed anaerobic digesters and anecdotes about 250 volunteers carrying the theatre's personal effects down the street during its recent move, I left with a strong feeling it would take some understanding to pin down just how this all works.

Arcola theatre was founded in 2000 by Mehmet Ergen and Leyla Nazli (pictured left). With a limited budget they took a leap of faith and started a theatre with an ethos of community involvement and social responsibility and an ‘anything is possible' mentality.

Plans to make the theatre carbon neutral were seeded in 2007 with the arrival of scientist Dr Ben Todd and the birth of Arcola Energy, the theatre's sustainability arm. With a PhD from Cambridge and a background in energy production, Dr Todd started working with the theatre during a gap year, and is still there today.

When a long lease became available in the Colourworks building, the possibility of making the theatre carbon neutral took a leap forward. Arcola had pioneered the use of hydrogen fuel cells and LED lighting in the old theatre amid widespread scepticism, and in 2008 lit its first production, The Living Unknown Soldier, using an LED-tungsten mix. It used one tenth of the energy of a standard production and now Arcola's unique portable, low energy lighting system is used in around 25 top theatre companies.

This novel approach also sparks interest among the theatre's patrons, too. Dr Todd said: ‘You can use the excitement of hydrogen fuel cells to draw people into more everyday things like recycling.'

‘By having high profile LED lighting in areas like the bar, you make energy saving a natural part of the theatre, rather than something people are being nagged about.'

There are discussions about installing a wormery and an anaerobic digester to provide heat for the building, while providing education about waste and sustainability.

As with any theatre, electricity is the major source of energy use and the focus for Arcola's sustainability programme.

The plan for the new building, a former printworks, is one of minimum intervention, because knocking down and rebuilding something uses a lot of energy. Its wealth of windows means electric lighting can be kept to a minimum.

The challenges of managing heat and lighting in a theatre are complex, however. Many aspects of modern buildings are inefficient and inconvenient for those using them, with overheating in winter and overcooling in summer. Arcola's factory-style metal-framed windows will need to be redesigned to provide both black-out and sound-proofing while being a source of ventilation.

A culture of sustainability

Productions are currently running even though the building has no heating, and as I talk to Feimatta Conteh, Sustainability Projects Arts Manager, she points out the floor of the Bloomberg Arts Lab, due to be sanded the following weekend. It is affectionately known as ‘Clive's floor' after the volunteer who has worked on it for weeks.

As people mill about, making the room ready for a later screening, there are holes in the windows and everywhere there are signs the building is to be finished.

Arcola is run by a charity, and fundraising is a constant necessity (Mehmet Ergen pictured left with deisgner Katharine Hamnett). For the refit, The Arcola Appeal has so far raised £60,000 of a total £150,000 from the community and corporate funding while an army of volunteers has worked for months to make this possible. Feimatta Conteh points out: ‘If a building doesn't matter to you, it won't exist.'

That people care was evident during the move, however. Rather than hiring a removal company, the community were invited to pick up an item and move it on foot. On the day, 250 people turned up.

‘We took up the whole of the street, from the old theatre to the new one,' said Owen Calvert-Lyons, Youth and Community Manager. ‘Now people come in, point at a chair and say: ‘I brought that here!'

Today the theatre honours this strong community relationship with ‘pay what you can day' on Tuesdays and a range of core groups that meet weekly throughout the year, from a youth opera to an over 50's drama group.

The youth group provides a training ground for young aspiring actors. Owen Calvert-Lyons said: ‘These young people are part of Arcola and it is important they are made to feel as such.'

In a time of budget cuts, Arcola remains a constant in East London, he added, pointing out it is important that programmes are there all the time, that you can't just pick things up and put them down when there isn't funding.

Respect from the community and arts world both nationally and internationally gives Arcola the platform to promote sustainability to other theatres, too. Arcola has won multiple awards and accolades for its performances. Only a week previously the Royal Opera House called them asking for advice on low energy boilers after the heating system broke down.

‘There needs to be a culture change about what climate change is,' Feimatta Conteh said. ‘Having a scientific entity within an arts organisation really makes people talk about the issues. Rather than having discourse through the usual channels we have it in a place where people aren't expecting it. Without communication about climate change there is a massive problem, and a massive difference between the things we are told we can do and the things we should be doing. It is about more than changing a light bulb.'

Laura Laker is a freelance journalist