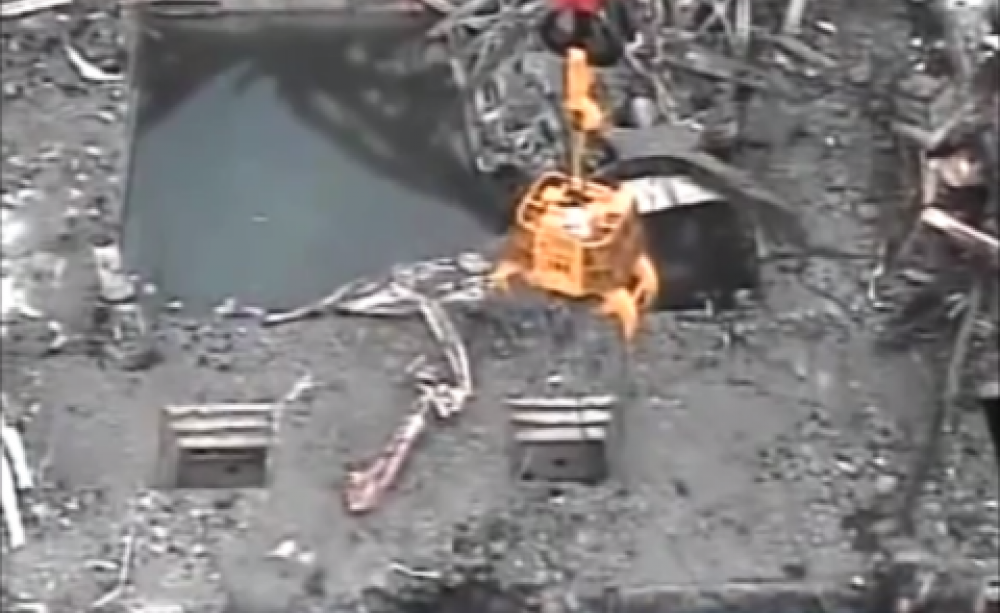 Clearing debris from around the spent fuel pond in Fukushima Building 3 in late 2013. Photo from Tepco video.
Unexplained plumes of radioactive steam have been rising from Fukushima's Reactor Building 3, Could a major meltdown be on the way?

Fukushima's Reactor Building 3 exploded on 13th March 2011 as a result of a hydrogen buildup, breaching the building's containment and emitting a huge plume of radiation. The reactor itself is in meltdown.

And now fresh plumes of steam have been seen coming out the structure. These have now been confirmed by Tepco, the owner of the nuclear plant, from 19th December onwards. The company believes the steam is coming from the fifth floor of the building.

However it does not know the cause of the steam. Lethal levels of radiation and the physical damage to the structure have so far made entry and inspection impossible.

Possibility 1: a meltdown is taking place

Ever since the explosion Tepco has been concerned that if the spent fuel storage pond dries out, the intensely radioactive spent fuel rods would melt down and produce further significant radioactive emissions.

One possibility is that this process may now be taking place. In the event of water loss from the pond, the water would begin to overheat and produce clouds of steam, prior to a complete meltdown. If this is the case then a second major nuclear disaster at Fukushima is in the making.

This explanation appears to be relatively improbable, however the Turner Radio Network is advising people on the West Coast of North America to "prepare for the worst" in case a meltdown of the waste fuel is in fact commencing.

No official warnings have been released on either side of the Pacific.

Reactor 3 itself contained 566 fuel rods, and has experienced a complete meltdown. The location of the molten fuel, known as 'corium', is unknown, but it may have burnt its way through the reactor base and entered the underlying soil.

This would also produce steam as the hot corium came into contact with groundwater, while also releasing radioactive contamination to make its way into the Pacific Ocean.

An alternative explanation is that the steam plumes could be caused by stray fuel pellets and reactor rod fragments - which themselves produce significant amounts of heat - coming into contact with rainwater percolating through the damaged and roofless structure.

And of course the same water could be reaching the hot reactor vessel. According to a Fairewinds Energy Education posting on Facebook, the reactor is currently producing about 1 MW of heat, equivalent to 1,000 1KW electric fires, so enough to produce plenty of steam.

This would provide the least worrying explanation for the steam, in that as the radioactivity continues decline so will the heat production and the volume of steam produced. If this explanation is correct, there is no reason expect any catastrophic outcome.

However the steam is carrying considerable amounts of radiation into the atmosphere and represents an ongoing radiation hazard.