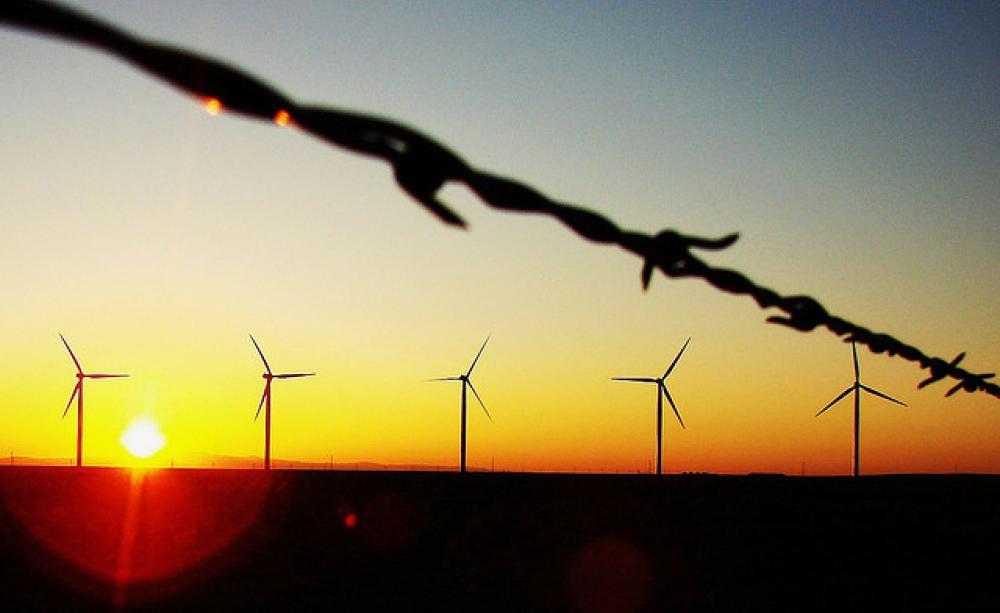 A sunrise industry: wind turbines in Texas. Photo: Chrishna via Flickr.com.
One evening in March, wind delivered over 10,000 MW of electricity to Texas's power grid, almost 30% of total demand, reports Ian Partridge, and another 18,500 MW of capacity is under construction. So just why is Texas going so big on wind?

New records for power output are set every year - for example, during the evening of March 26 this year wind provided 10,296MW of power to Texas electricity grid, meeting 29% of demand at that time.

So why is wind booming in the US now, especially in Texas, known more for its rich oil and gas deposits? To understand what is going on we have to look at three factors: subsidies, transmission lines and the interplay of state and federal policies.

As is the case elsewhere in the world, wind power in the US depends on subsidies, known as the production tax credit (PTC).

Wind only gets 3.4% of federal energy subsidies

The actual generation cost of a new project is about US$50 per megawatt hour (MWh): with the PTC providing US$23 per MWh, the project is profitable at a contract price of US$27, possibly a little less for project in a favourable site. This is competitive with fossil fuel power stations.

It is worth pointing out that a 2008 study by the Texas Comptroller of Public Accounts found that wind received only 3.4% of subsidies given by the federal government to the energy sector.

The problem is that the PTC has become a political football, sometimes renewed by Congress for only a year at a time. The situation today is that projects under construction at the end of 2013 receive the PTC (provided they are producing power in 2015), but later projects miss out.

This creates a boom-and-bust cycle - of the 12,000MW of new projects that began construction last year, almost all (accounting for 10,900MW) started during the last quarter in order to take advantage of the subsidy. And essentially no projects will start construction during the first half of 2014, because the subsidy has ended.

In spite of the uncertainty, long term growth

These cycles create high levels of uncertainty and complicate the task of supply-chain management. Sometimes operators must lock in construction contracts, financing and power purchase agreements during a short window of opportunity, while all their competitors are doing the same thing.

What is really surprising is not today's boom but the fact that the US wind industry has consistently achieved rapid growth over a long period.

Annual capacity growth from 1990-2011 was 16.3%, and during the latter part of that period, growth continued unabated even while the cost of gas, a hugely important part of power generation in the US, was falling sharply.

Transmission lines are vitally important. Texas is a huge state, in a huge country. While good wind conditions are found in regions like West Texas, they are hundreds of miles from cities with demand for power.

The CREZ project (Competitive Renewable Energy Zones) designated five zones where wind could compete against fossil fuels in energy generation, and then built almost 3,600 miles of high-capacity transmission lines to deliver the output from an estimated 18,500MW of new wind capacity.

The new transmission lines, even without the cost of the wind turbines themselves, cost almost US$7 billion, a cost paid for ultimately by a levy on consumers.

Other major wind-related transmission projects are under construction (Prairie Wind Transmission, in Kansas) or about to start (Transwest Express, linking Wyoming to California).

The bottom line - wind is profitable at a state level

This brings us to the interplay of federal and state policies in the US wind market. If you listen to their rhetoric you know that Texas politicians are fiercely conservative. Energy is serious business here - not a playground for environmental activists or soft-centred liberals. In this state, subsidy is a four-letter word.

So why is Texas leading the charge towards ever higher levels of wind penetration? It has 12,354MW of wind capacity installed, more than a fifth of the national total and more than any European country other than Germany or Spain.

The reason why the conservatives who run the Texas energy sector like wind so much is very simple. If you leave federal taxes out of the equation as inevitable, wind is a very profitable proposition at state level.

An economic study made in advance of the CREZ investment found that it would bring down prices to Texas consumers, attract industrial investment, create 40,000 jobs and boost the state's leading position in wind-related industries.

The same study found that CREZ would contribute to cutting water usage by 17 billion gallons, and CO2 emissions by 16%. With outcomes like that, even a Texas conservative can accept a subsidy from Washington.

Ian Partridge is a Postdoctoral Fellow at the University of Texas. He does not work for, consult to, own shares in or receive funding from any company or organisation that would benefit from this article, and has no relevant affiliations.