Não a PEC 215! No to Brazil's plan to open indigenous lands to industrial exploitation! 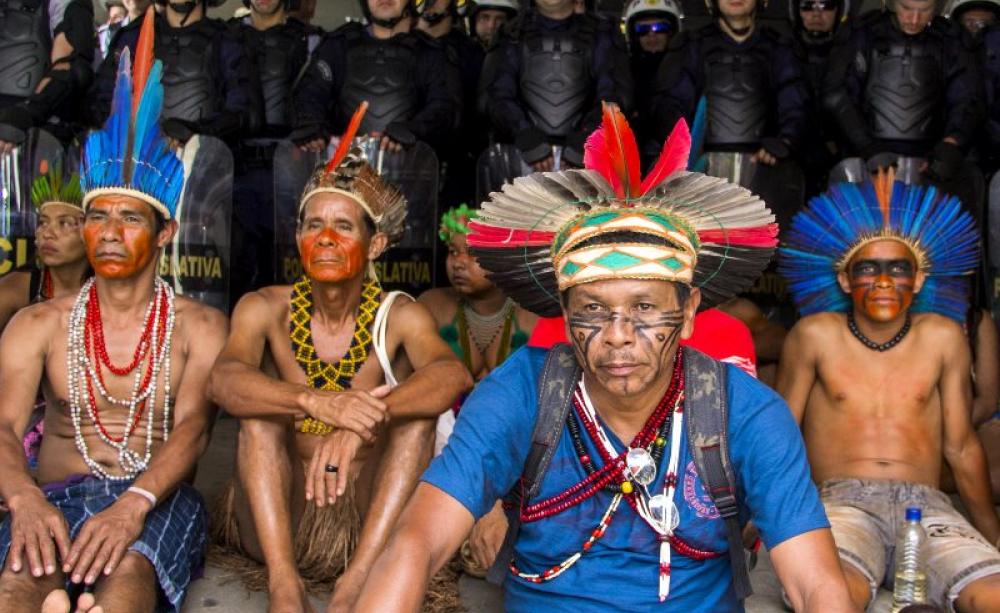 Indigenous representatives of multiple ethnicities were barred from Brazil's Congress building last 16th December when they gathered to oppose PEC 215. Photo: Ninja Midia via Flickr (CC BY-NC-SA).
Last December Brazil's indigenous Peoples defeated the PEC 215 constitutional amendment that was meant to open up their territories for agribusiness, mining, power generation and industry, writes Chris Lang. But now, thanks to 'Chainsaw Queen' Kátia Abreu, minster of agriculture, it's back on the agenda ... and resistance is growing once again.

There are many things holding back progress - the environmental issue, the Indian issue and more. But even with these problems we keep producing high levels of productivity. Imagine how high it might be without those obstacles.

The Brazilian Congress is currently considering a change to its constitution that would be a major blow for the recognition of indigenous rights in the country.

PEC 215 was proposed in 2012, as the 215th amendment to Brazil's 1988 Constitution. The Constitution came after the end of 20 years of military dictatorship in Brazil. It was known as the 'social constitution'.

In December 2014, indigenous peoples won an important victory, when PEC 2015 was shelved, after months of protests. But there was always a danger that the proposal would be revived. And now it has been.

Brazil's Congress has a large block of anti-indigenous politicians, the ruralistas, that campaigned for the weakening of Brazil's forest code and maintain close ties to the agri-business sector.

In December 2014, Dilma Rousseff, Brazil's President, appointed a leading figure in the ruralista lobby, Tocantins Senator Kátia Abreu, as minster of agriculture. Her nickname is the 'Chainsaw Queen'.

In a recent interview with the Guardian Abreu explains her anti-environmentalist views: "Criticism from radical environmentalists is the best form of endorsement. It gives me satisfaction. It shows I am on the right track and playing the right role."

She attacks any group that attempts to slow the expansion of Brazil's agriculture sector. She claims that environmentalists, indigenous groups and landless peasants are working for foreign interests. Of course she provides no evidence for this, but says that she gets "a very strong impression that this is the case":

"For many years, environmentalism reached an extreme pitch and we in the agribusiness sector were treated like criminals. [But now] our agribusiness sector can influence the choice of kings and queens in Brazil. In the past, we only exercised economic influence. Now we also have political power."

For Abreu, environmental issues and indigenous peoples are 'obstacles': "There are many things holding back progress - the environmental issue, the Indian issue and more. But even with these problems we keep producing high levels of productivity. Imagine how high it might be without those obstacles."

Not surprisingly, the rate of deforestation in Brazil is increasing.

Francisco da Silva, an indigenous Kapinawá leader from the state of Pernambuco, told Truth Out of Dilma Rousseff that, "During her presidential campaign, she committed to demarcating indigenous territory in Brazil. Today, we see that indigenous people are moving toward complete disappearance.

"If she herself does not honor her own words and the constitution, the only thing left for us to do is for us to demarcate our own territories and to defend our ancestral lands ourselves, because if we do nothing, this law will leave us in the hands of the multinational corporations."

In May 2015, 48 senators signed a statement against PEC 215, which describes the proposed amendment as "inapplicable". The statement adds that the proposal "brings to the sphere of the Congress a political and legal error" and represents an "attack on the rights of Indigenous Peoples".

The fact that more than half of all senators signed the statement suggests that if the proposal to amend the constitution reached the Senate, there is a good chance that it would be rejected.

The triumph of capitalism? Not on our watch

"PEC 215 and its appended action are intended to paralyze the demarcation of indigenous lands, the titling of Quilombola Territories and the creation of Units of Conservation, as well as to permit the approval of large-scale projects within these protected areas, such as: hydroelectric dams, mining, extensive agribusiness, the building of highways, waterways for industrial transport, ports and railways."

"We have to consider that we live in a country of rights, that the Brazilian Constitution established a set of rights that took into consideration the ethnic differences of this country.

"Those rights cannot be trapped by an argument of a development model visibly committed to profit at the expense of the welfare of the majority, not just indigenous, but the welfare of all of us ... This is the capitalistic world, the triumph of the interests of a small group."