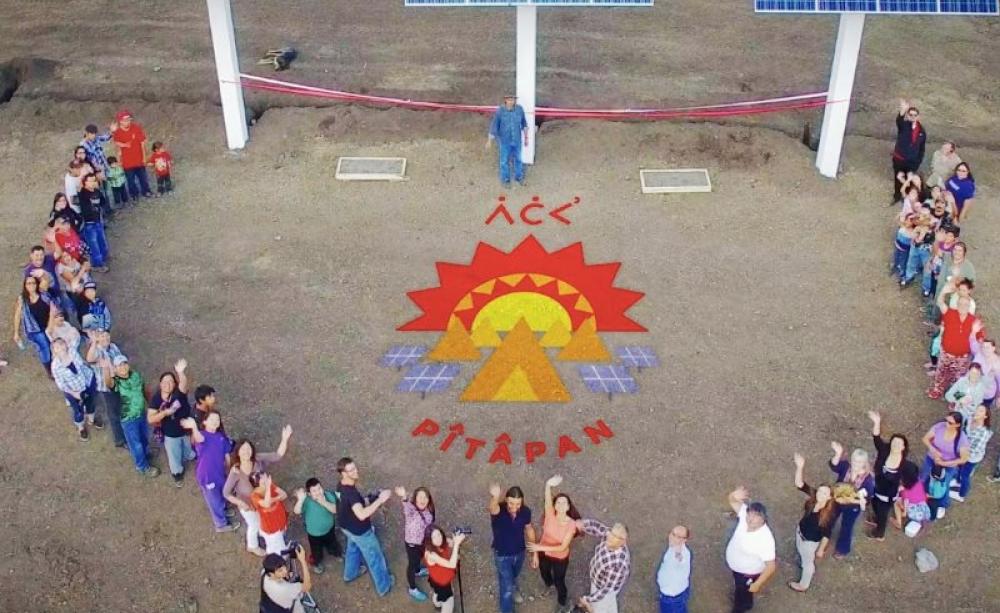 Ribbon cutting ceremony for the new solar installation in Little Buffalo, Alberta. Photo: Greenpeace Canada via Youtube.
An 500-strong Indigenous community in Alberta, the heart of Canada's environmentally catastrophic tar sands industry, is fighting back against the pollution, writes Melina Laboucan-Massimo - by cutting themselves adrift from dependence on fossil fuels, and starting up their own solar power station: a vital first step towards building a just and sustainable society.

We must separate oil and state which is driving us to climate catastrophe. Instead we need a world run by 100% renewable energy by 2050, where communities own their own power and can build a just society.

Refusing to be victims in this game of fossil fuel roulette, communities like Little Buffalo in Alberta are leading the way towards energy independence. They are turning their gaze to the sun.

In a community of five hundred people in northern Alberta, a 20.8 kW solar installation has been set up to power the First Nation's health centre, and put additional energy back in to the grid.

The Indigenous community of the Lubicon Cree used to be self-sufficient and was able to live off the land. Now the community deals with contaminated water, polluted air and a compromised landscape. In 2011, the community dealt with one of the largest oil spills in Alberta's history.

After dealing with three decades of intensive oil, gas, logging, fracking and tar sands exploitation in our homeland, my community of Little Buffalo has chosen to forge a new future and become powered by the sun.

First Nation communities have been on the front lines of resource extraction for far too long, and we have paid dearly for the price of humanity's addiction to oil, but we have hope that we will find a way out of the crisis we are currently facing in Alberta and around the world.

Victims of fossil energy no more!

Refusing to be victims in this game of fossil fuel roulette, communities like Little Buffalo are leading the way towards energy independence - making The Leap towards a new future that some of our leading thinkers say everyone else must follow.

Despite being the oil capital of Canada, solar energy is taking off in Alberta. Albertans want to see change, and solar is huge part of making that change happen, but we need to demand this change.

A just transition needs to happen not only in communities that can afford renewable technology, but it must begin to happen in communities facing the brunt of the environmental, social, and health implications from the extractive industry and climate change.

This solar installation (see photo) in Little Buffalo was done mostly by community members, who have never installed a solar project before. Now they can use these new skills to install more solar around Alberta.

However, these types of renewable energy project shouldn't rest on the shoulders of communities to implement alone, they should be supported by governments around the world that have instead given immense subsidies that have supported the aging fossil fuel industry for decades.

Countries like Canada need to accelerate the transition from destructive, climate polluting energy sources like the tar sands towards the green, just energy economy so many of our communities so desperately want, and need, to see.

We must separate oil and state which is driving us to climate catastrophe. Instead we need a world run by 100% renewable energy by 2050, where communities own their own power and can build a just society.

The time to act on the growing climate crisis is getting shorter by the day. Our communities deserves justice. For many of us from impacted communities the choices are literally life and death. It's time Canada stopped burying its head and brought about the just transition.

Energy democracy can be built through the decentralisation of our energy grid where people are no longer subject to the woes of the boom and bust economies of fossil fuels, and where the oils and gas lobby no longer runs our governments.

The fossil fuel regime makes us think we need to remain dependent, but when we decentralise our power we create energy independence in our communities and countries.

We need to separate oil and state which is driving us to the brink of climate catastrophe. Instead what we need to see is a world run by 100% renewable energy by 2050, where communities own their own power and can build a just society which will help save our planet and life here on Mother Earth.

Everyone and every roof can be a part of the solar solution. Solar energy production is oil spill proof. Canada should aim higher, and set a goal and commit to 100% of its power coming from renewable energy just has been outlined in the recent Greenpeace report of 100% Renewables.

Even in the heart of the tar sands we can build a different kind of economy with clean energy and green jobs without compromising our families and communities. But a just transition needs to prioritise communities like First Nations that are already impacted by dirty fossil fuels. A just transition means our communities will no longer be sacrifice zones.

We are seeing Indigenous and non-Indigenous peoples alike galvanised by the sun. Please stand with us - and help build a positive solution-based economy across this globe. We must do it now without waiting for governments to decide to do this for us.

The solar panels in my community will still be standing even when the last oil project is finished. I think it is time that this change is made across the planet -  especially in places like Alberta tar sands. Panel by panel communities will show politicians what true leadership is.

We've been looking down far too long and digging the bottom of the barrel in dirty fossil fuels. We must now turn our gaze towards the sun and realise the true energy potential that is available to us here and now. We must choose to build healthy vibrant communities before it is too late.

Melina Laboucan-Massimo is from Northern Alberta and a member of the Lubicon Cree First Nation. She works as an advocate for Indigenous rights, and for the past 8 years she has worked against unabated tar sands extraction and expansion as a Climate and  Energy campaigner with Greenpeace in Alberta, as well as with the Indigenous Environmental Network internationally.

This article was originally published by openDemocracy under a Creative Commons Attribution-NonCommercial 4.0 International licence.