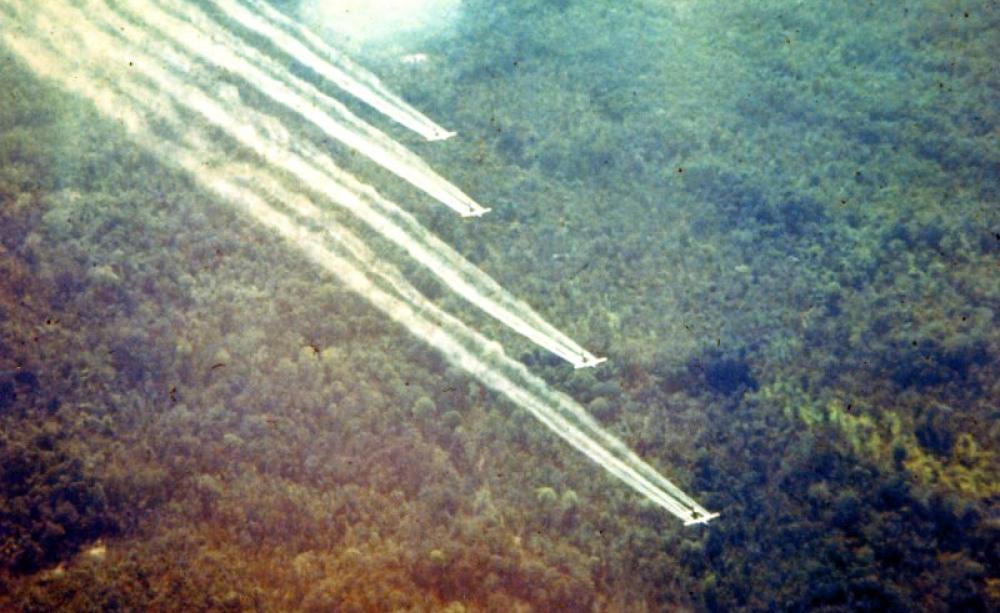 Monsanto's supply of defoliant chemicals for the US's 'Operation Ranchand' in Vietnam is just the first of the alleged 'crimes' for which the company is facing trial in the peoples' tribunal. Photo: manhhai via Flickr (CC BY).
This autumn the Monsanto Tribunal will assemble experts from around the world to set out the evidence against the global mega-corporation, which will stand accused of monstrous 'crimes' against people and the environment. The Tribunal's verdict will not be legally binding - this time. But on a future occasion, it may be.

The Monsanto Tribunal will not only expose the consequences of Monsanto's activities on livelihoods, health, human rights and the environment, but will also demonstrate to the world what could happen if citizens were able to hold corporations accountable.

Monsanto may not be a household name in the UK but as one of the world's leading seed and chemical companies, its activities affect us all.

Its best-selling weedkiller is made from a chemical called glyphosate that the World Health Organisation has found to probably cause cancer. Yet its use is now so widespread that traces are found in one out of every three loaves of bread in the UK.

That's why earlier this year, in the lead up a EU decision about whether to relicense glyphosate, we mounted public pressure on decision makers through our Monsanto honest marketing campaign.

We sent out thousands of spoof labels to individuals which ended up on supermarket shelves across the UK telling the truth about Monsanto's products and their corporate power. Our campaign was part of widespread opposition across Europe, which resulted in a rejection of the automatic 15-year relicense in the EU, as expected by Monsanto. Instead, glyphosate was only relicensed for 18 months pending further research.

Unbelievably, selling toxic chemicals to the mass market is just the tip of the iceberg when it comes to Monsanto's appalling record. Monsanto is at the forefront of pushing a model of agriculture that takes control away from small-scale farmers as well as causes environmental damage. Monsanto maintains it market dominance by getting farmers hooked onto its expensive weedkillers and seeds that have be purchased every year from Monsanto.

Not only is this costly for cash-strapped subsistence farmers, but it's unnecessary. Scientific evidence shows that organic, non-chemical methods are effective for growing healthy food as well as better for the environment. Being able to keep, save and exchange a wide range of seeds also helps maintain biodiversity, assists with climate adaptation and supports resilience in farming.

Putting Monsanto in the dock

It's for these reasons that civil society groups from around the world are holding an international 'people's tribunal' to hold Monsanto to account for its impacts on communities and the environment.

Additional 'crimes' being put before this people's tribunal include Monsanto's history of producing toxic chemicals for warfare, its well-documented manipulation of scientific evidence, misleading and dishonest marketing campaigns and underhand lobbying efforts to promote its products.

The Tribunal will be held at The Hague this October and conducted by legal professionals and practicing judges. It will consider whether Monsanto is guilty of the following:

Despite the legal frameworks being used in the Tribunal, the outcomes will not be legally binding as there is currently no mechanism to bring criminal charges against a company like Monsanto. Instead, the significance of the Tribunal will be largely symbolic in order to demonstrate how a corporation could be brought to account.

The Monsanto Tribunal will not only expose the consequences of Monsanto's activities on livelihoods, health, human rights and the environment, but will also demonstrate to the world what could happen if citizens were able to hold corporations accountable.

A UN treaty on business and human rights?

The arguments brought against Monsanto will demonstrate the problems of corporate-controlled agriculture, which will apply to other agribusinesses too. The Tribunal's work will also give victims and their legal counsel the arguments and legal ground for further lawsuits against Monsanto within their national jurisdictions. Experts and witnesses from around the world will come to the Tribunal to give testimony and Monsanto has been invited to give its defence.

Corporate power and the pursuit of profit at the expense of human rights, environmental protection and democratic processes lies at the heart of many of the social and economic injustices that the world faces today. Efforts to constrain this power have been given a fresh impetus through a UN initiative to set up an international, legally binding mechanism to regulate corporations.

A UN treaty on business and human rights could enforce minimum standards for corporations to abide by and failure to do could lead to legal action. The potential for curbing corporate power would be huge but it would also take many years to achieve.

In the meantime, the Monsanto Tribunal will not only expose the consequences of Monsanto's activities on livelihoods, health, human rights and the environment, but will also demonstrate to the world what could happen if citizens were able to hold corporations accountable.

Monsanto Tribunal: The trial will take place in The Hague beginning on 16th October 2016. More information.

Events: Global Justice Now will be bringing one of the witnesses to the UK for a speaker tour in five locations (London, Edinburgh, Bristol, Manchester and Leeds) alongside a photo exhibition showing the impacts of corporate agriculture on communities in October (dates to be confirmed). This will give audiences in the UK an opportunity to hear some of charges against Monsanto, first-hand.

This article was originally published by Global Justice Now.