'Recycling is for drunks, addicts and babushkas' - inside Russia's shadowy waste industry 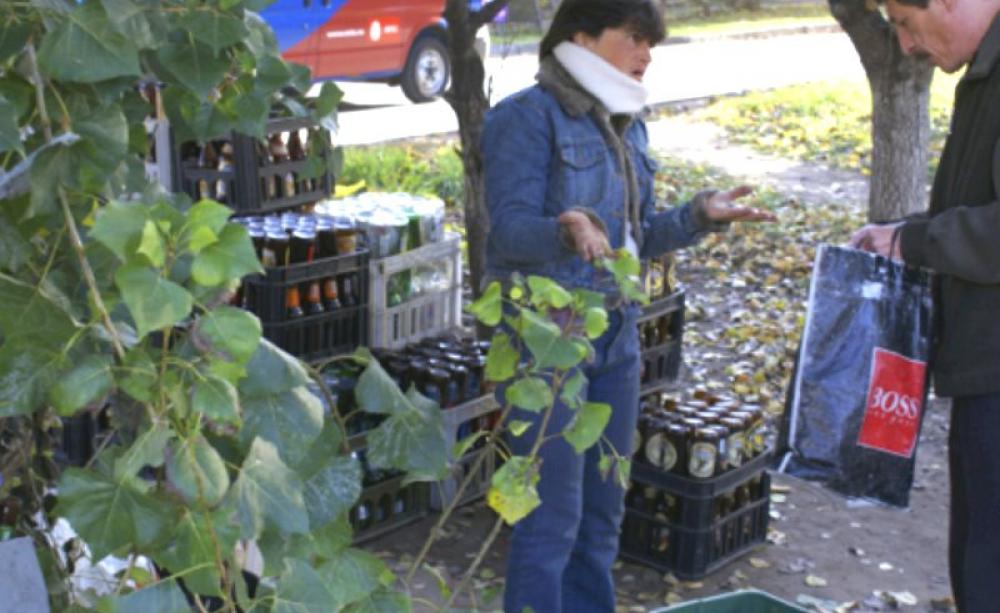 Russia’s informal recycling sector at work. Photo: Minna Halme.
Official recycling rates in Russia stand at close to zero, writes Minna Halme. But my study of the potential to develop the sector uncovered widespread informal recycling networks, lurking in basements, stigmatised for supposed links to organised crime, barely tolerated by the authorities. And any ideas of legitimising the shadowy recycling operations are met with frosty official silence.

In Russia, informal recycling identifies you as some kind of undesirable. It is a heavily stigmatised activity and ordinary Russians make an effort not to be seen doing it. People also view many recycling companies as having links to organised crime.

Most Europeans take pride in recycling. A good citizen separates glass from plastics, biowaste from metal cans and brags about it to their friends. Recycling helps soothe some of the anxiety driven by endless consumption.

However in Russia, recycling comes with a sense of shame. This is reflected by the fact that more than 80% of Russian domestic waste ends up in landfill, and most of the rest is incinerated.

For comparison, Europe's best recyclers - Austria and Germany - reuse well over 60% of their municipal waste while the UK manages 39%.

A 2012 report by the International Financial Corporation, part of the World Bank Group, found that Russia's waste recovery rate was "nearly zero".

I first became aware of negative social attitudes to recycling in Russia during research in Samara (formerly Kuybyshev), the country's sixth largest city and which lies in a twist of the river Volga 1,000km from Moscow.

Until the collapse of the Soviet Union it was a closed city hosting aviation and automobile industries. Along with a team of Russian and Finnish researchers, we wanted to immerse ourselves in the local culture and learn about the potential for developing eco-innovations in an economy undergoing rapid transition. The results of which were published late last year.

We focused on how people dealt with their waste. At first the task didn't seem too gratifying as the people whose lives we followed told us they threw all their waste in the bin and that there was neither waste separation nor recycling.

An hidden industry lurking in the shadows and dark places

But as we observed their daily lives, we noticed some people leaving beer bottles under the staircases of their apartment building. We also saw bottle collection points outdoors under trees or in shabby basement premises.

The outdoor collection points were tended by women who told us their salary was some 200-300 roubles (about £2) a day, but they refused to tell who collected the bottles and paid their salary. We were usually thrown out of the basement recycling places as soon as it turned out we wanted information.

When we asked people whether they ever took bottles to these recycling points, most regarded the question as ridiculous. The question made a lot of sense to us as the families we asked were from the low-income tiers of society and could certainly have used the extra money. Probing the issue further we were told that "only alcoholics, drug addicts or poor babushkas [elderly women] who clean corridors" take bottles to recycling points.

In Russia, informal recycling identifies you as some kind of undesirable. It is a heavily stigmatised activity and ordinary Russians make an effort not to be seen doing it. People also view many recycling companies as having links to organised crime.

In addition to the bottles, we also saw used cardboard neatly packed as if it was going somewhere. But nobody seemed to know who it belonged to and where it was heading for. Once, when taking a photo of one such cardboard pile, a bulky man came shouting loudly and chased us away.

It's not easy to get access to companies in Russia, but we were lucky to find one waste management firm willing to talk to us. One morning we met the CEO in his office. After some champanskoye (sparkling wine) and chocolate he took us to visit his company's landfill site.

The company focused primarily on landfill, he told us, because to get involved in recycling or reused items was too risky a business; and waste fragments of any value, such as bottles and metals, were already in the hands of the mafia.

Integrating this informal, underground recycling with official efforts to deal with waste is tough. To give one example, we recently worked with Baltika brewery in St Petersburg, which wanted to start bottle collections because of the environmental policy of its parent company, Carlsberg Group.

As part of an intensive course on corporate sustainability, an enthusiastic group of international and Russian students were asked to design bottle collection and recycling methods that would encourage Russians to recycle. Baltika wanted to set up an independent, stand-alone system.

Knowing about the informal bottled recycling, which seemed to be as well-organised in St Petersburg as it was in Samara, I suggested a collaboration with independent recyclers, given there was a system already up and running. The question was met with a cold response: such informal bottle collectors were regarded as criminals.

In Russia, informal recycling identifies you as some kind of undesirable. It is a heavily stigmatised activity and ordinary Russians make an effort not to be seen doing it. People also view many recycling companies as either having links to organised crime, or risking conflict with such groups.

So at both an individual level and more organised corporate level there are major barriers to setting up the types of systems taken for granted in other parts of Europe.

And despite the best efforts of citizens and companies, don't expect to hear about major advances in systematic large-scale recycling in Russia any time soon.